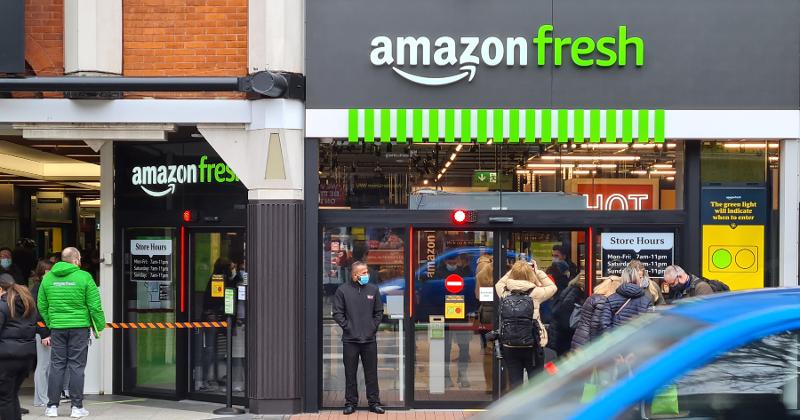 In recent weeks, Amazon Fresh has opened three new U.S. stores—the latest in Long Beach, Calif., on March 18. It opened its fourth Illinois store in Bloomingdale on March 10, and another Southern California store, located in Fullerton, on Feb. 25. New Amazon Fresh locations reportedly slated for Sacramento, Calif., and the greater Philadelphia are also getting buzz. But it’s the reaction to new stores across the pond that’s putting the trademark smile on the faces of some industry watchers.

With its "Just Walk Out" technology, the first U.K. Amazon Fresh in the Ealing neighborhood of West London elicited a mixed bag of consumer response when the 2,500-square-foot store opened on March 4. Some thought the store “scary,” while others described it as “magical,” according to the Independent, which noted one elderly gentleman cursed his way out of the store when faced with the prospect of a checkout-less shopping experience.

Frightening or fabulous reviews of its first London store aside, Amazon Fresh opened its second U.K. location March 16 in Wembley.

Despite the “Amazon Fresh” name on the building, the U.K. stores sound more like a hybrid of Amazon Fresh and Amazon Go in the U.S. The latest Amazon Fresh “convenience store” in Wembley, the company said, does not require shoppers to have a Prime membership. “Customers simply use the Amazon app to enter and can put their phone away and shop for what they need like normal, bagging items as they go. At the end of their shopping trip, they can just walk out, no stopping to stand in a queue or check out,” Amazon said.

The Amazon Fresh store at Wembley Park also offers customers a wider assortment of goods than U.S. shoppers would expect from most convenience stores, including the new private food brand, "by Amazon." The brand has hundreds of products, including meat, poultry and fish, dairy, fruit and vegetables, bakery, freshly prepared meals and everyday essentials. By Amazon will also offer customers hot food throughout the day and on-the-go meals for breakfast, lunch and dinner.

“The Amazon Fresh store offers customers everything they’d want from their local neighborhood grocery store with an experience that allows shoppers to simply take what they want and just walk out,” the company added. “We are excited to see how customers like the Amazon Fresh stores and look forward to opening more in the greater London area in the future.”

But it’s not only Amazon Fresh products, which the company said have been specifically curated in West London and Wembley with the U.K. consumer in mind, but technology that’s for sale from the Seattle-based retailer.

Earlier this year, the first-ever Hudson Nonstop, a convenience store in the Dallas Love Field Airport debuted using Amazon’s Just Walk Out technology. The new 500-square-foot store from Hudson, which operates more than a thousand c-stores in airports and other transportation hubs across the U.S., is designed to allow travelers to seamlessly enter the Hudson Nonstop store with a swipe of their credit card or using Tap to Pay, take the products they’re looking for, and then walk out of the store.

While many believe Just Walk Out technology is the future of grocery retail, the journey to full adoption will likely log some casualties along the way, like the West London gentleman who headed down the block to Sainsbury.