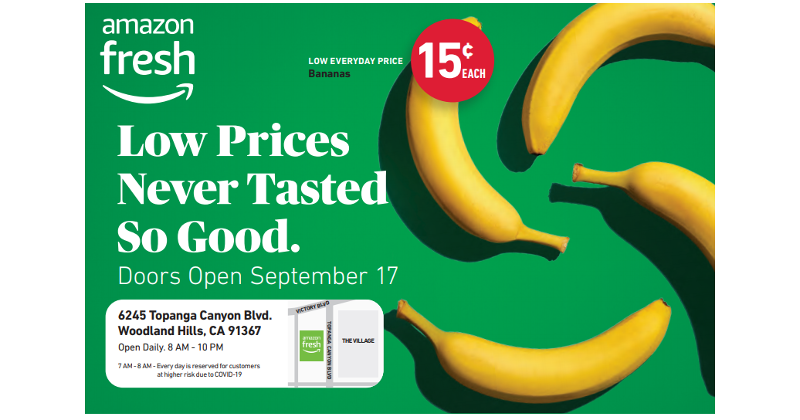 Behind grand ambitions to be a top banana in the competitive U.S. grocery space, Amazon is coming out swinging.

The public unveiling of its maiden Amazon Fresh grocery store in Woodland Hills, Calif., this morning comes with the revelation that it would sell bananas everyday at 15 cents each—a bop on the nose to Trader Joe’s, which made the 19-cent banana a signature offering and a price point at which market leaders have long aspired to meet. 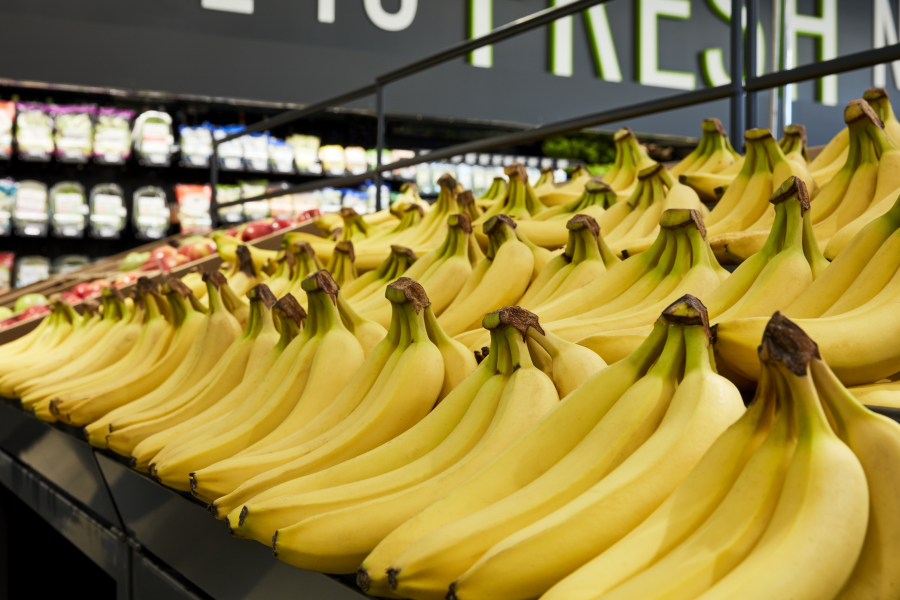 The banana price occupies the front page of the first published sales circular for the long awaited new banner, which opened late last month to invited guests and is expected to be first of hundreds that could invade the industry in the months and years to come. While the single store, which is also touting sharp everyday prices on grocery staples such as fresh bread loaves (89 cents) and rotisserie chickens ($4.97) won’t bloody the industry on its own, observers see the Seattle-based tech giant as a particularly significant new threat given its track record of disruption in other industries and the financial wherewithal to aggressively compete for a share of the mainstream U.S. grocery business over the long haul, with a willingness to take losses on bananas and fight on price in the real world as just one of its weapons.

“The substantial difference between Whole Foods and Amazon Fresh is that this store is determined to go after the heart of the U.S. grocery industry in a way that Whole Foods could not,” Neil Stern, senior partner of the Chicago retail consulting firm McMillan Doolittle, told WGB in an interview, speaking of Amazon’s first foray into grocery, the 2017 purchase of the Whole Foods Markets chain. “To some degree, Whole Foods is never going to shake the ‘whole paycheck’ reputation and positioning despite another round of price cuts. Amazon Fresh is a fresh start for them in the mainstream.” 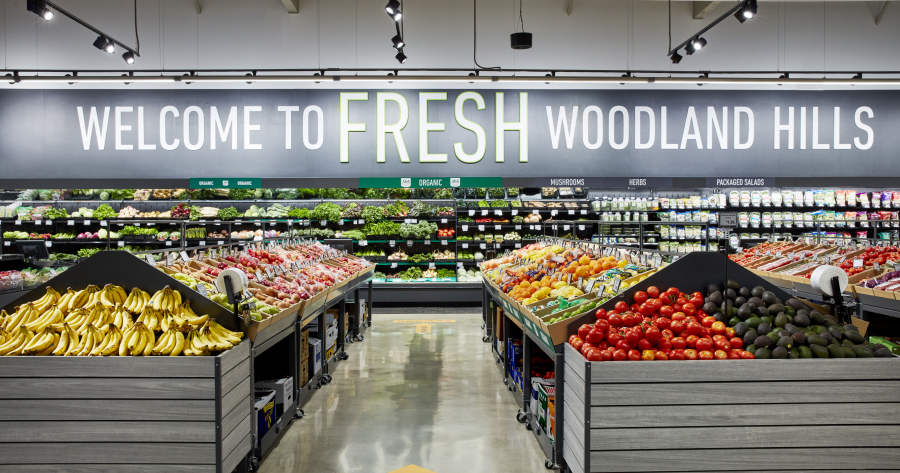 As previously reported, the 30,000-square-foot store is also arriving with built-in advantages no other new entrant to the grocery space has ever possessed—a loyalty base of more than 100 million paid members, data gleaned from years of pioneering e-commerce, experience with an upscale sister in Whole Foods, and developed technologies adapted to aid a grocery shopping environment, including proprietary voice services, smart shopping carts and same-day pickup and delivery. 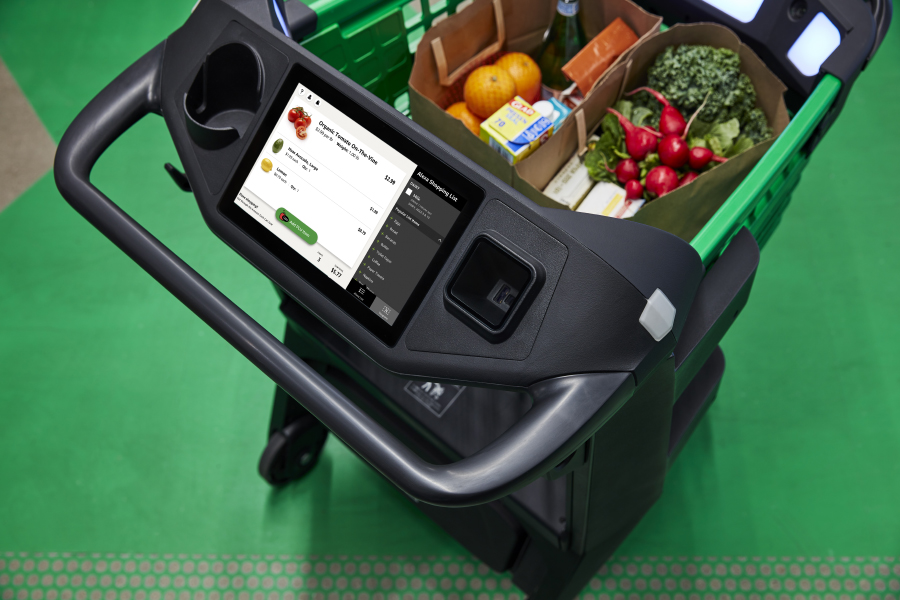 A spokesperson said the store is currently using in-store workers to assemble orders to go. The company has not addressed any use of behind-the-scenes picking technologies, despite reports indicating it that is or was part of its plan.

“Amazon Fresh is a new grocery store designed from the ground up to offer a seamless grocery shopping experience, whether customers are shopping in-store or online,” Jeff Helbling, VP of Amazon Fresh Stores, said in a blog post introducing the store to area shoppers. “We’ve taken our decades of operations experience to deliver consistently low prices for all and free, same-day delivery and pickup for Prime members.”

Unlike sister chain Whole Foods Market, which touts a curated selection based in part on ingredient and sourcing standards, the Amazon Fresh assortment is decidedly supermarket-like, with a mix of specialty and prepared-in-store items, private labels, including new brands like a wine selection called Cursive (a chardonnay rated 91 by wine critic James Suckling is on sale this week for $8.49) and Fresh (meats, including a $7.69-per-pound USDA Choice New York strip steak on special this week). There is also national brands, local items such as Rockenwagner Bakery and Groundwork Coffee, and some regional favorites that Helbling said are difficult to find in Los Angeles, such as Duke’s mayonnaise and Ellenos yogurt. 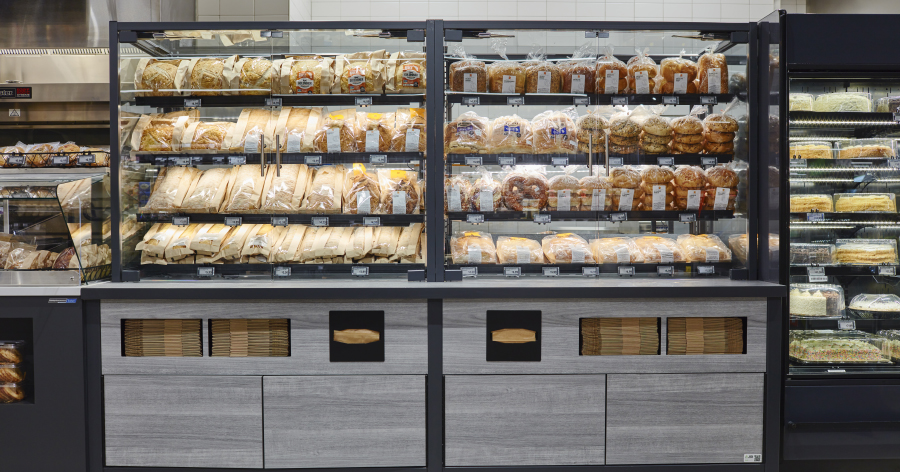 Helbling in his blog post heralded positive reviews of the quality of its prepared food offerings gathered during a three-week preview trial.

“Since opening to invited customers over the past few weeks, we have received positive feedback from customers who have enjoyed our freshly prepared foods, with our classic pepperoni and pesto chicken pizza slices being among our top sellers, along with our spicy tiger sushi roll and rotisserie chickens,” he wrote. “One customer shared, the prepared food offering is ‘a good value and so tasty … the best I’ve seen from a grocery store.’” 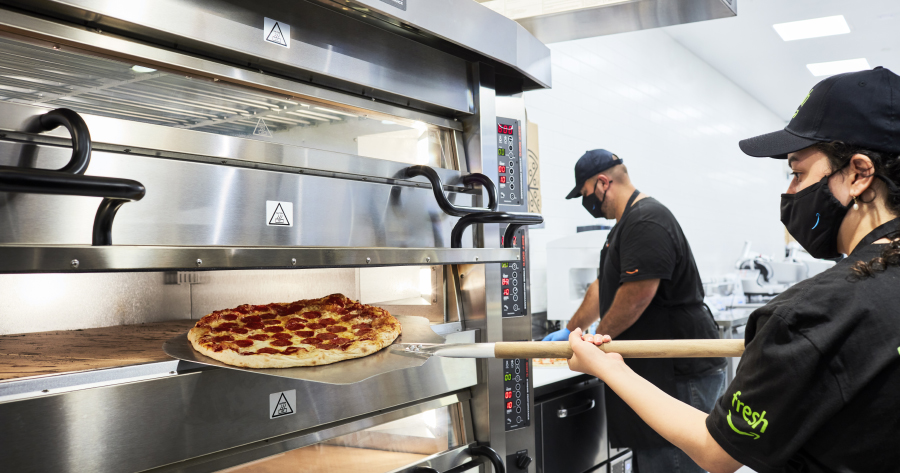 Amazon has acknowledged it is at work on a handful of additional Amazon Fresh locations in the U.S., but numerous local reports—many leaking from public applications for liquor license transfers filed by Amazon—indicate many more could be on the way. “Whatever you think is coming, it’s probably 10x more than that,” Stern said. “One store in Woodland Hills is sort of ‘So what?’ It will take hundreds of stores if not thousands, and some market concentrations on top of that, to be truly significant.”

The grocery industry has turned away some ambitious and innovative rollouts over recent years, including Tesco’s Fresh & Easy experiment that, like Amazon Fresh, first set up shop in California. An aggressive expansion into grocery by Walmart that began 30 years ago was ultimately a wild success—but costly for established industry counterparts who couldn’t adjust. Like Walmart, Amazon is thought to admire physical grocery for its ability to generate purchase frequency and deepen relationships with shoppers, who devote a larger share over the overall spend to the retailer. Food retailers, including Walmart, appear to be anticipating Amazon’s arrival in the physical grocery space for years, spending hundreds of millions to modernize their offers.