A new front in the grocery delivery wars is opening.

Amazon, which offers its paying Prime members the option of unlimited grocery deliveries through its Amazon Fresh business, said it is eliminating the extra fee for shoppers currently using that service and extending the free offer to all Prime shoppers in coming months. It also plans to speed deliveries to as little as two hours.

Amazon Fresh previously had a $14.99 monthly fee on top of its Prime membership, which costs $119 annually or $12.99 per month for most U.S. consumers.

The move marks a new signal of Amazon’s ambitions to expand grocery well beyond its Whole Foods Market business and the current confines of Fresh. It also appears to combine elements of newly launched capabilities that reduced delivery times on Amazon’s e-commerce offerings with services such as Prime Now, which offer one- and two-hour deliveries utilizing contract shoppers and delivery drivers out of Whole Foods stores. The move could also tie to Amazon’s reported interest in rolling out a new physical grocery chain, although the company has still not acknowledged that ambition yet.

“Prime members love the convenience of free grocery delivery on Amazon, which is why we’ve made Amazon Fresh a free benefit of Prime, saving customers $14.99 per month,” Stephenie Landry, VP of grocery delivery for Seattle-based Amazon, said in a release. “Grocery delivery is one of the fastest-growing businesses at Amazon, and we think this will be one of the most-loved Prime benefits.”

The new offering is available only to Prime members currently using Fresh, but shoppers in 2,000 U.S. towns and cities where grocery delivery is available can sign up online to receive an invite. Shoppers at a signup page may be asked to select among available stores (in Brooklyn, N.Y., Prime shoppers can request either Fresh or Whole Foods). 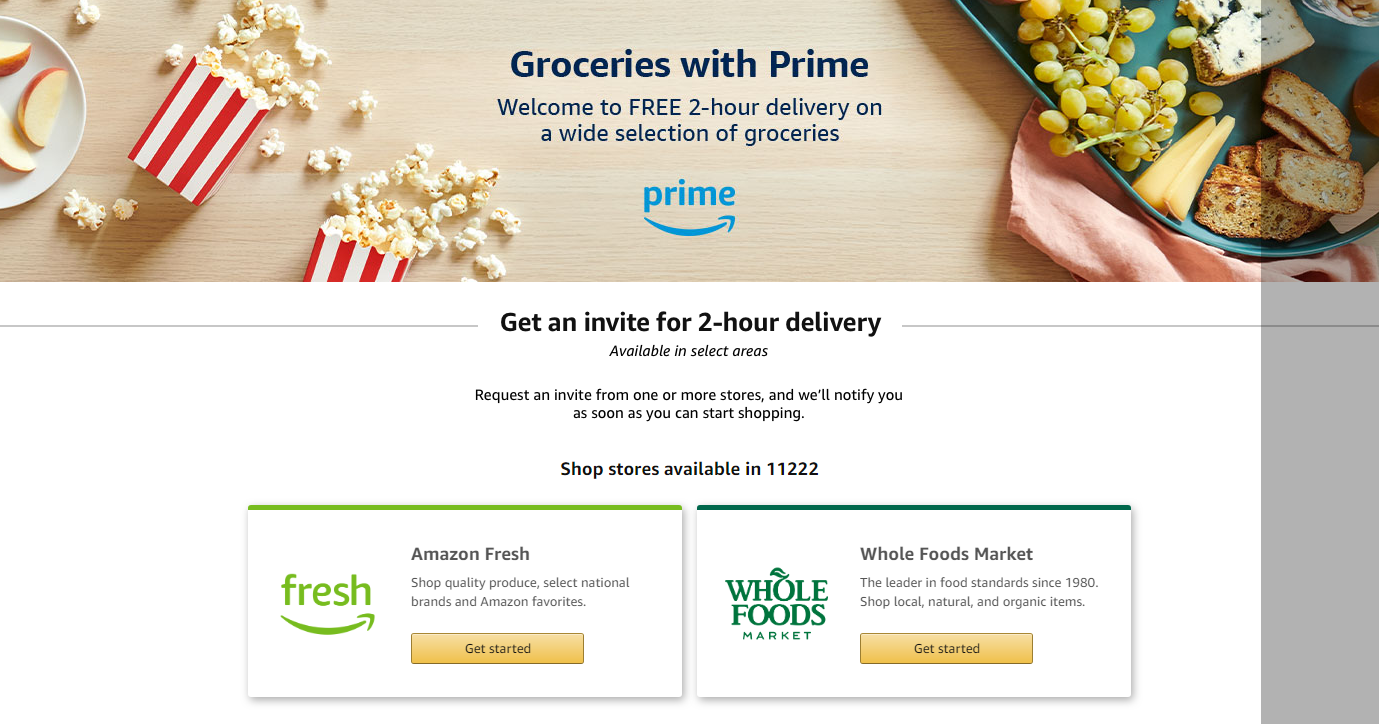 Amazon officials were not immediately available to respond to WGB’s request for further details of how the new offering would work. Amazon Fresh orders until now have originated in dedicated warehouses and were fulfilled by truck route drivers, utilizing thermal bags and typically at scheduled times. The new offering speeds delivery times to as soon as two hours.

Sources indicated it was likely the new Fresh offering would make use of the revamped warehouse infrastructure supporting next-day delivery, augmented with fulfillment from local Whole Foods stores.

“I think Amazon has built out its fulfillment infrastructure for Amazon Fresh, and will meld it with its other offerings,” Sylvain Perrier, president and CEO of Mercatus, a digital commerce platform serving food retailers based in Toronto, told WGB in an interview.

Providing free grocery delivery as part of Prime would also provide a powerful attraction for new members, Perrier said, while responding to moves by competitors such as Walmart and Target that are effectively using existing stores to support growing demand for delivery. Walmart last month said its Delivery Unlimited option, providing unlimited delivery of online grocery orders for a $98 annual fee, would expand to shoppers at 1,400 stores by year-end.

Amazon said it has more than 100 million paid Prime members who also receive benefits such as free shipping and streaming TV. It was not clear how many of those shoppers paid an additional fee for Fresh.

Adding grocery to other items available to online shoppers can also improve the margin mix on food sales. Walmart is similarly beginning to realize similar benefits of melding its “orange” (grocery) and “blue” (general merchandise) sides of its e-commerce offering, sources say.

Amazon has invested heavily in warehouse infrastructure to allow for its recent one-day delivery rollout and has shown a willingness to lose considerable money as the offering ramps up. In financial results released last week, Amazon said it expected costs of one-day delivery would total $1.5 billion in the current quarter. However, the speedier delivery was a factor in the company’s 28% third-quarter sales gain. Delivery also appears to have contributed to a decline among sales from physical stores: The company counts delivery orders in its online sales figure; customer purchases in physical stores fell by 1% in the third quarter.

Chris Perry, VP of global executive education for London-based Edge by Ascential, said the move had “huge potential” to disrupt the U.S. market. “By removing barriers for trial and repeat and adding immense value among such a large population of loyal Prime members, not to mention leveraging a naturally high traffic season to maximize visibility and consideration, Amazon is setting itself up to jump its market share baseline and leadership position heading into 2020.”

Perrier said the move would likely challenge Amazon’s grocery competitors to assess their need and capability to provide comparable services. “My advice to retailers is to ask themselves how crucial two-hour delivery is for their customer base, and ask themselves what the return on investment would be,” he said.

“Armed with Whole Foods and an endless amount of shopper data, Amazon’s expansion of Amazon Fresh makes the retail giant a major contender in the grocery space,” added Paul Milner, marketing director, of the electronic shelf label company Displaydata. “While traditional grocers don’t have the foundation of e-commerce data that Amazon does, it does have one thing: experience. This expertise in the space will give grocers an advantage over an Amazon grocery store, but the experience must be enhanced with investments in technology. Just as Amazon has moved the needle in so many ways, it will undoubtedly raise consumers expectations of what a 21st century grocery store should look like.”