Another study released as Lidl reaches its first birthday in the U.S. indicates the discounter is increasingly resonating with shoppers who are buying the “quality and value” combination that the discounter is selling.

Analyst Bill Bishop of Brick Meets Click this morning declared the firm was “bullish” on the concept in spite of real estate missteps resulting in suboptimal volumes at the 50-plus Lidl stores that have opened in the U.S. since last June. Oliver Wyman last week released a report similarly indicating that Lidl’s shoppers have taken well to the concept.

“Despite a rockier start than expected, there are good reasons to expect that Lidl and Aldi will grow their combined market share and increase pressure on both traditional retailers and name brands,” Bishop said.

The research included analysis by the Service Management Group, indicating that consumers rated Lidl higher than average on its overall “price for value” and that its shoppers were more likely to recommend the store than the average. Lidl’s reputation in these aspects has grown from below average perceptions as measured in its first months, the report indicated. 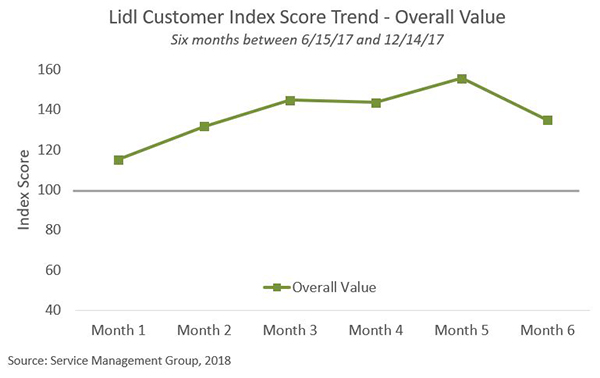 These perceptions are helping the company win increased share as baskets have grown, the Service Management figures show.

“Lidl customers spent less than they expected in the first three months compared to customers shopping at other stores in the market, but after that they began to spend more. This shows that Lidl was able to convince their core customers that they could satisfy an increasing share of their grocery needs. For those customers, Lidl became a more attractive shopping alternative.” 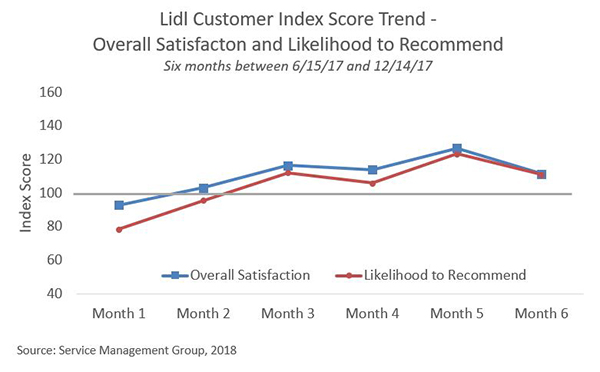 In an interview with WGB reviewing the new research, Bishop acknowledged Lidl still needs to turn these positive perceptions into additional store traffic and productivity. He said he anticipated Lidl could do this by reducing the size of new stores and paying closer attention to the quality of the sites where they are built—aspects the company has acknowledged it is working on.

“I think it’s clear that Lidl’s stores were too big for the volumes they generated,” Bishop said. “But I think the combination of shrinking the store and improving the sites would go a long way toward store productivity and sales per square foot.”

Lidl could also generate better store traffic by improving the “pizzazz” in the packaging and marketing of its private brands, Bishop added.

“I think Lidl believes they have perfected their products from a quality standpoint, but they need to work to strengthen the confidence in their brands, and advertise them.”

Bishop said the trajectory of Lidl—along with a concurrent growth in online shopping—would increase pressures on growth and profits for traditional retailers and branded goods.

“Traditional retailers may be able to slow—but not stop—this growth with aggressively priced private label products,” the report said. “Tesco has apparently been able to do that with their Farm Brand products in the UK.”