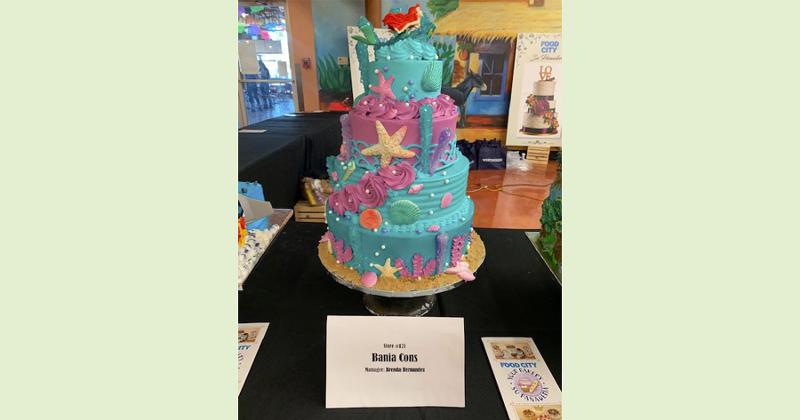 Bashas’ Food City customers now know where to go for cakes that wow. The Chandler, Ariz.-based grocer, which operates more than 100 stores across the state under a handful of local banners, recently sponsored Food City’s fifth annual Cake Decorating Challenge at one of its stores in Chandler.

In-store bakeries have much to gain by becoming a destination for cakes. Chicago-based big data provider IRI finds that fresh bakery cakes are one of the five fastest growing categories in fresh, up $26 million to $226 million for the 52 weeks ending June 16, 2019.

Shoppers were invited to watch Food City’s Food Network-style event on Aug. 23, during which six specialists from Food City bakeries across Arizona showcased their talent in real time.

This year’s event did not have a specific theme, heightening the competitiveness as bakery artists put their skills and imaginations to the test.

The winning cake design by Bania Cons featured Ariel from "The Little Mermaid" atop a purple and aqua fondant extravaganza. It will be offered to customers later this year and will become part of the cake line that Food City bakeries feature.

“Food City may be well-known for its everyday-low-price groceries, but the grocer also serves up exceptional quality and value when it comes to making cakes from scratch for birthdays, quinceaneras, weddings, baby showers and other special events,” said a Food City release. “Many of Food City’s cake designers have been honing their craft for years. As a result, brides and other party planners can confidently serve a Food City bakery creation that is as beautiful as it is delicious—at highly competitive prices.”