In a series of moves that follow the path of omnichannel merchants such as Walmart and Amazon, Ahold Delhaize said today its U.S. stores would soon launch an “endless aisle” providing an additional 80,000 to 100,000 food and general merchandise offerings to shoppers through a partnership with third-party marketplace Mirakl, and that its Giant Co. division would launch a paid subscription program offering perks to dedicated shoppers early next year.

The Dutch retailer also said its U.S. stores would further grow private label selections by more than 1,500 new items and that it would step up the pace of the ongoing brand renewal at its largest U.S. banner, Stop & Shop.

These initiatives accompanied a review of third-quarter financial results impacted by the coronavirus pandemic, showing its U.S. stores grew sales by 11.3% to $12.7 billion; that non-fuel comps increased by 12.4%; and that e-commerce sales grew nearly 115% to $583 million in the quarter, or to about 4.6% of its overall U.S. sales—all at constant exchange rates. Underlying operating income in the U.S. improved by 22.7% to $547 million, and underlying operating margin jumped from 4.4% in last year’s third quarter to 5%.

Ahold Delhaize, which also operates stores in Europe, reported a 10.1% overall sales gain in the quarter to 17.8 billion euros, and it raised its outlook for fiscal-year underlying earnings-per-share growth from the low 20% range to high 20% and reset U.S. omnichannel growth ambitions for the year from 75% to 90%.

“The operational execution by our teams remains outstanding and has continued to drive strong Q3 performance in both the U.S. and Europe,” Frans Muller, CEO of Ahold Delhaize, said in a release. “Our results reflected our ability to leverage our leading local digital and omnichannel platform, which generated nearly 115% net consumer online sales growth in the U.S. and nearly 50% growth in Europe in the quarter, at constant exchanges rates. While there remains a high level of uncertainty in the market, our strong year-to-date performance allows us to raise our 2020 underlying EPS outlook once again.” 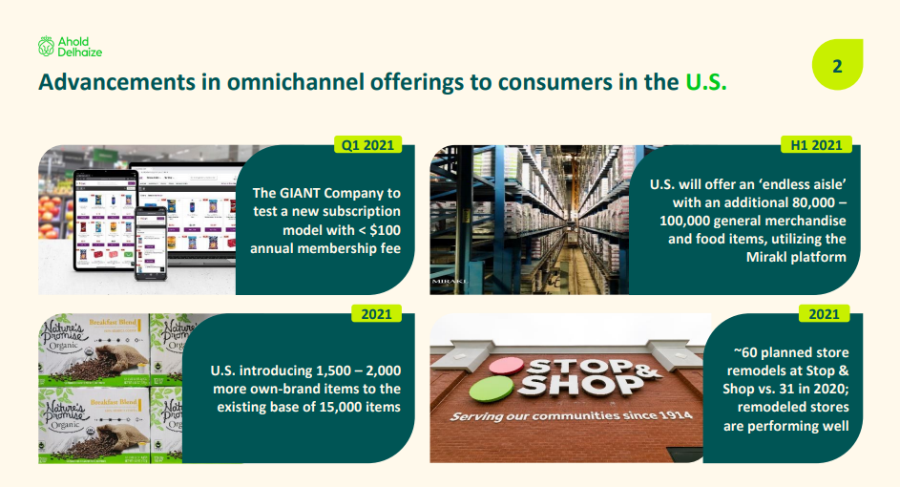 In a conference call discussing results, Muller described a bevy of initiatives he said would “solidify our position as an industry-leading omnichannel retailer in 2021 and beyond,” including the revelation of the Mirakl and Giant Co. news.

Details of the paid subscription program at Giant Co., the Carlisle, Pa.-based chain that operates 190 stores, are light at the moment, but Muller said the subscription would cost less than $100 a year and would include perks such as an improved value proposition and preferential delivery slots.

“As many of you know, our brands have offered subscription plans for years. And they have quite loyal following by consumers,” Muller said, according to a Sentieo transcript. “But we always look to improve our offerings. Therefore, the Giant Co. will test a new subscription offer in the first quarter of next year, with an annual membership fee under $100, improved value proposition and preferential delivery slots. We believe this improved subscription offering should lead to both increased loyalty and engagement.”

Subscription-based paid loyalty programs, epitomized by Amazon’s Prime program, have become something of trend among omnichannel retail players. Ahold Delhaize, through its Peapod e-commerce offering, had previously allowed its shoppers to pay for delivery subscriptions. With Peapod now integrated into its U.S. local brands, Giant’s forthcoming offer would presumably include a delivery component, but also likely to shine a light on changes to stores, including at Giant, a newly crafted brand platform called For Today’s Table that will introduce changes in store offerings like kombucha bars and prepared foods.

A separate brand renewal as Ahold Delhaize’s largest U.S. banner, Stop & Shop, will step up next year with at least 60 store renewals. First showcased at a handful of sites in Connecticut, the initiative has come to 31 more Stop & Shop stores on Long Island, N.Y. Like the changes at Giant, the “Reimagine Stop & Shop” campaign makes changes in merchandising offers at stores, highlights fresh and prepared foods and includes pricing investments and integration of technologies designed to modernize the store and emphasize an integrated omnichannel.

Muller said results of the conversions have been “performing well, with sales lifts in line with our expectations.”

The “endless aisle” partnership with third-party marketplace Mirakl will begin next year and add between 80,000 and 100,000 items for U.S. online shoppers. Mirakl, based in Paris and with U.S. offices in Boston, is a so-called “unicorn” startup fresh off a $1 billion valuation that also recently announced an integration with The Kroger Co. as an option to bolster its Kroger Ship direct-to-consumer business.

Mirakl provides a third-party platform—similar to those run internally by Amazon and Walmart—that retailers can link their sites to and generate more sales, entice store visits through click-and-collect offerings, and test new products and brands. According to Mirakl, its marketplace sales offer a higher profit margin than either “dropship” or owned product sales.

Muller said Mirakl would debut with one of Ahold Delhaize’s U.S. brands early next year, calling it a “logical next step” to bolster fast-growing e-commerce food business with items that may be related, like kitchen gadgets, available on the marketplace.

“[Mirakl] gives an opportunity for customers to have a more convenient full shop. And you can imagine that a lot of items close to food, if it's a food preparation, if it's culinary, if it is kitchen, but also a number of nonfood convenience items might be a very nice addition to our total offer,” he said, adding “it gives a nice opportunity to extend our offer and hopefully also have an even stronger margin mix. Partnering up with Mirakl means that it’s not our stock, it’s not our working capital, but is extending the offer in total with general merchandise.”

Ahold Delhaize’s financial performance in the quarter was aided by continued higher-than-normal volumes associated with the coronavirus pandemic and an associated consumer habit changes. Higher volumes are helping to drive better sales leverage, metrics around shrink and are helping to build volumes making e-commerce more effective, said Muller, who added he feels that the behavior changes will be “sticky.”

“We know a lot of you are wondering what the future holds for Ahold Delhaize. In short, we think the future is bright, and many consumers have found a new love for eating at home. Many households, including my own, discovered cooking skills they never knew they had, and they enjoyed it,” he said. “Others who are more challenged with time and haven’t quite yet developed their cooking skills, they discovered many delicious and convenient meal solutions we offer.

“Many households also discovered the strength of our assortment, particularly in fresh and healthy items,” he continued. “They have found ways to save money and extract even more value such as through our loyalty programs, our competitive price points and through our exclusive own brand offerings. They have found new ways to engage with us, whether that is in-store with contactless payment options or through our convenient click-and-collect and delivery options. We think a lot of these attitudes and behaviors will be sticky in the future, and we will continue to adapt as new behaviors develop. While 2020 will be a record year by nearly any financial measure, we know it’s also a time we have to lean into our strength to continue driving our business forward in the future.”

CFO Natalie Knight said Giant Food and Food Lion had the highest U.S. sales growth rates in the quarter, although she did not identify specific figures for its brands. Click-and-collect was a “significant driver” for sales as availability has grown from around 700 stores at the beginning of the year to 883 now and headed for 1,400 by next year

Asked about profitability of online, Knight said: “That ability to have better capacity and higher demand has definitely led to improved profitability, both in Europe and the U.S.,” Knight said. “We still have lots to learn. … but we’re very pleased with the development, and it’s a key focus as we look at e-com. It’s on the one hand about growth, but making sure that we’re doing really smart growth as we develop.”

Promotions were vs. last year’s third quarter as stock levels were still down, although stronger than in the second quarter, Muller said. “And for the fourth quarter, what we expect is that the promotions will further grow in line with the availability of products and also in line with commercial plans of vendors and ourselves. But they will still most likely be below last year’s promotion levels.”