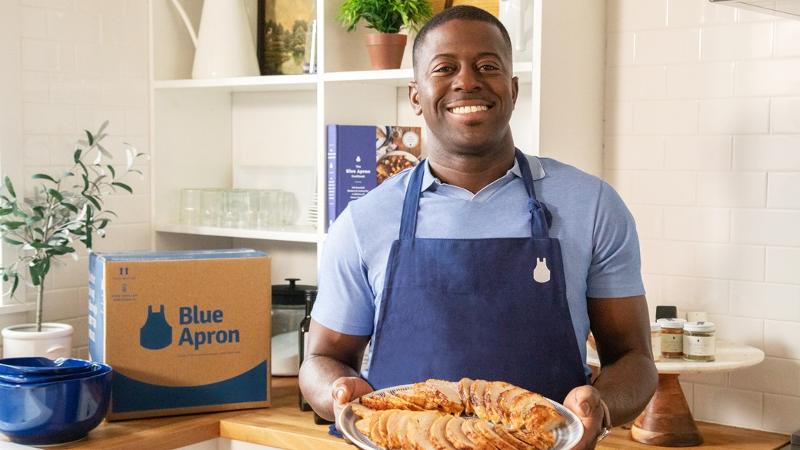 The New York-based meal kit company, in the meantime, said moves made to address capacity—namely temporarily reopening an Arlington, Texas, production facility it had closed last year in a cost-saving move—has helped to address some operational issues that had interfered with its ability to absorb as much demand as the trends might have offered.

For the period ending Dec. 31, Blue Apron said revenues climbed by 22% to $115.5 million, while its net loss narrowed to $11.9 million. The company lost nearly $22 million in the same period last year. Adjusted EBITDA in the quarter showed a loss of $1.7 million, an 80% improvement over last year’s fourth quarter.

The company is expecting sales growth would continue in the current quarter as it steps up marketing spend again. It is forecasting a 23% to 27% sales increase in the quarter and a double-digit sales gain for the fiscal year. Profitability, in the meantime, will remain elusive: Blue Apron expects a net loss of no more than $16 million in the quarter and an adjusted EBITDA loss of about $6 million.

In a call discussing the results with analysts, CEO Linda Findley Kozlowski highlighted what she called a "very active quarter” that resulted in improvements in key customer metrics, such as average order value ($61.43 from $58.14 last year) and average revenue per customer ($327 up from $269). Overall customers and orders per customer were also up slightly over last year’s fourth quarter but slipped slightly from the third quarter as Blue Apron pulled back marketing as it addressed capacity issues.

Kozlowloski also noted key executive changes made since that incident, with a new chief financial officer, Randy Greben, and Charlean Gmunder, who joined as joined as chief operating officer in late November.

The new customer capabilities include Blue Apron Customized, which launched nationally in December and provides what Kozlowski called a “bridge” between core menu and premium offerings giving customers more ability to swap or upgrade, and the ability shop by dietary needs and preferences. A more flexible ordering platform that also launched late last year now allows shoppers to ship orders to different addresses as needed, gain more control on the days of the week they receive orders, “double up” on recipes and purchase special occasion boxes like a Thanksgiving offering the company offered for the first time this year in partnership with chef Edouardo Jordan, which Kozlowski said drew “stronger than expected” demand.

Kozlowski declined to say how long she anticipated the Arlington facility would remain open. “We’re basically looking at that on an ongoing basis to see what makes the most sense with a combination of both consumer demand and also, of course, making sure that we have redundancy and capabilities as we continue to ramp up some of these new product initiatives across our lines to save labor there,” she said, according to a Sentieo transcript.