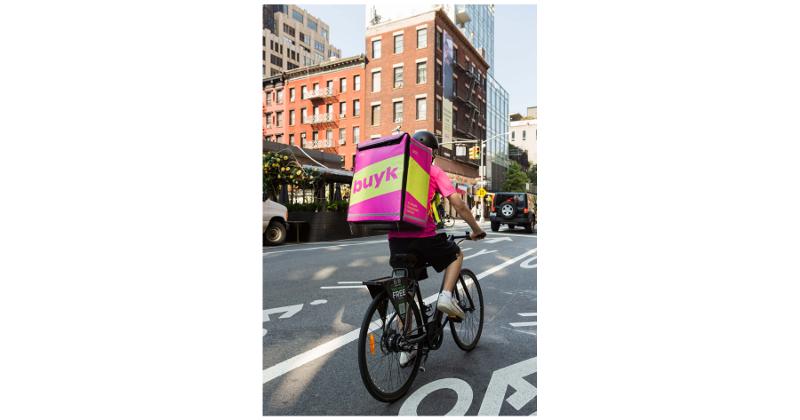 Note: This story has been updated Aug. 31 to clarify an earlier published version that incorrectly described Buyk as a division of Samokat. It is a separate company established by former co-owners of Samokat, according to a spokesman who reached WGB after this story was first published Aug.30.

The Russians are coming, by bike.

It joins a wave of newly established and soon-to-arrive counterparts offering shoppers on-demand ordering and delivery built on “dark-store” microwarehouses and a fleet of electric bicycles and scooters. These couriers travel no farther than addresses that can be reached in 15 minutes or less, creating what the retailers describe as a new level of convenience. WGB previously reported the company was on the way, joining counterparts like Gorilla, Jokr, Fridge No More and FifteenTwenty. Getir, a Turkish retailer recognized as a pioneer of the ultrafast delivery concept, is also planning a multicity U.S. launch, job listings show.

According to its website, Buyk is available now in most parts of Manhattan—roughly Harlem and all neighborhoods south. It was not immediately clear how many warehouses were in operation.

Buyk's co-founders, Slava Bocharov and Rodion Shishkov, co-founded Samokat in 2018 but sold their majority stake to a strategic investor last year before embarking on Buyk, which a spokesman said had global ambitions, starting with its launch in New York.

Samokat (“scooter” in Russian), is known of something of a “shooting star” in Russia, where it soared from less than 1% of the online market share to nearly 6% between 2019 and 2020, Sebastian Rennack, senior retail analyst for Central & Eastern Europe for Lebensmittel Zeitung, a trade news brand, told WGB earlier this summer.

According to Crunchbase, Buyk has raised $46 million in seed capital to support U.S. expansion.

A LinkedIn page lists several jobs available in New York and a description that reads in part:

“Our mission is to give our customers back the one thing they often lose the most of: their time. We feel that time is truly valuable and shouldn't be spent waiting in line to check out or spending hours a week running back and forth between different stores .

It adds: “Buyk is much more than a well-oiled genius of logistics; behind the curtain, a multimillion-dollar software system combines the buying experience with stock and delivery management, employing the latest programming approaches and marketing techniques. Coupled with artificial intelligence, our meticulously selected product assortment provides for the streamlined shopping experience, eliminating time-consuming browsing through the irrelevant items.”