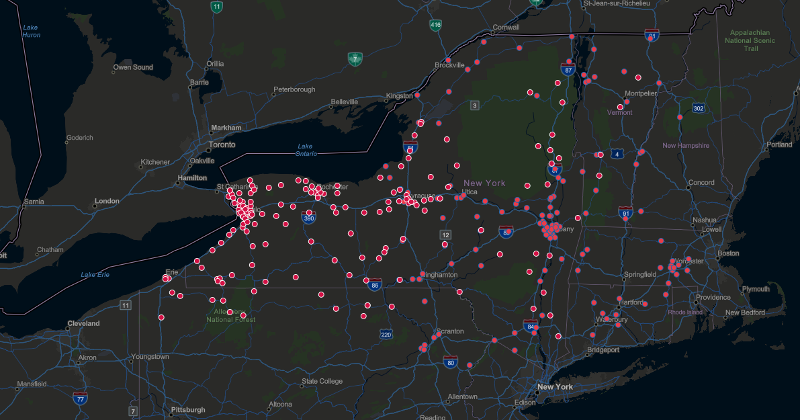 Let’s not call it a match made in heaven, but a meeting made in Syracuse.

Price Chopper and Tops Markets, the upstate New York supermarket brands each established nearly a century ago, agreed this week to instead join forces, a move that will bring much-needed economies of scale to the iconic but slow-growing brands in the Northeast.

The deal, which is expected to close in coming months, joins the leading retailers on either end of Interstate 90 as it passes through the Empire State, from Price Chopper’s Schenectady, N.Y., base near the capital region west to Buffalo, where Tops was established and maintains headquarters in nearby Williamsville, N.Y. Their footprints meet in the middle around the city of Syracuse. Price Chopper’s 130-store footprint extends east and north from Schenectady into Massachusetts, Connecticut and Vermont; Tops, with 159 units, also includes significant presence in the Rochester and Erie markets, some in Western Pennsylvania, and scattered units mainly in small towns in the Adirondacks and Vermont.

The companies in a joint a press release described the “almost perfectly contiguous footprints” of the respective brands, along with obligatory testimony to the similarities between them that make for a good fit, including their heritage, go-to-market strategies and “customer-first” approaches.

But make no mistake, this deal is primarily about the realities of surviving today’s food retailing climate, where being an estimated $2.5 billion (Tops) or $3.5 billion (Price Chopper) company in slow-growing markets is clearly no longer enough to ensure they can stay competitive on pricing and investment with larger scaled competitors, including in their cases common enemies such as Walmart, Target and Aldi, and larger regional combatants like Ahold Delhaize for Price Chopper and Wegmans for Tops. This reality—presumably to be addressed through savings from the elimination of duplicative back-office functions, which are to be consolidated at Price Chopper’s Schenectady base—should generate a better ability to invest in their concepts.

It is also evidently important enough to smooth over some significant differences between the organizations—namely Tops’ union-represented workforce coming together with Price Chopper’s historically hawkish perspective on organized labor in stores. Such a combination might once have unthinkable.

United Food and Commercial Workers Local One—said to have been among those that were looking for a long-term solution for Tops, which employs 10,000 of its members—issued a statement asserting its intention to “use every legal measure” to be certain workers are treated fairly and its contracts can be renewed as part of the new organization.

Also worth noting are differences in how Tops and Price Chopper distribute. Sources say they believe the plan will be to convert Tops away from an outsourced agreement with C&S Wholesale and extend the model of self-distribution Price Choppers employs, a move that would mirror that of larger scaled competitors such as Ahold Delhaize, a company that has also demonstrated that combinations of organized and union-free labor are possible.

Interestingly, it’s long been whispered that a so-called “gentleman’s agreement” between the families controlling the Wegmans and Price Chopper empires kept either from infringing upon the other’s territories. I’ve never verified this. But the Tops deal will put the organizations in more direct competition than ever before.

“As Amazon/Whole Foods, Walmart/Sam’s, Target, Costco, BJ’s, Aldi, Dollar General, Dollar Tree/Family Dollar, Walgreen, CVS and Ahold/Hannaford continue to use their enormous size, and very low cost of capital to make extraordinary investments in their powerful, ubiquitous store and online grocery ecosystems, it is ever more critical for regional grocers to build the scale required to enable them to also invest in price, people, marketing, technology and growth,” albeit far less given their relative size, said Scott Moses of PJ Solomon, which served as Price Chopper’s adviser in the deal. “This transaction is a clear reflection of that imperative.”

While Price Chopper has been said to be seeking financial partners for some time, the genesis of this week’s announced deal may have been more recent cries for help from Tops, its union, United Food and Commercial Workers Local One, and Silver Point Capital, the Greenwich, Conn., distressed debt specialist that helped see Tops through its 2018 Chapter 11 bankruptcy, said Burt P. Flickinger III, the Western New York-bred industry consultant for Strategic Resource Group. Flickinger speculates that “de minimis” cash would be involved in the transfer—that mainly for Tops’ inventory—with Price Chopper taking over debt service.

Flickinger said he sees the potential for the combination to deliver much stronger results particularly for Tops, noting its smattering of franchised stores are already strongly outperforming their corporate peers. The chain can benefit from Price Chopper’s historic focus on the shopper, bringing better pricing and more contemporary formats like Market 32; the expansion of Tops’ gas rewards programs to additional stores and a focus on energy savings attainable through a move to more solar, or what Flickinger called “cash registers on their roofs.”

That's one way of looking ever upward, or as they say here in the Empire State, Excelsior.