I pulled into the lot shortly before 10 a.m., gathered my resuable shopping bags and then realized: I didn’t have a quarter.

Rummaging through the console and between the seats of my car, I felt lucky to have unearthed a sticky one and proceeded, only to discover that the shopping cart corral beside the newly opened Valley Stream, N.Y., Aldi was an empty tunnel to nowhere. Every last shopping cart was out there on the floor of the store, or somewhere in the vast parking lot, and it struck me: Less than an hour since opening, this store had already jumped the guardrails of its legendary efficiency: With no quarter-deposited mate to lock to, the shopping carts were set free like animals.

I was pondering this thought when a gentleman returning his cart from the lot approached and I offered to take it the rest of the way. Sir, if you’re reading, I owe you a quarter.

Inside the new store were hundreds of carts, each pushed by a shopper exploring the newly opened store for the first time. For a veteran Aldi explorer, there was little that hadn’t been seen before. Aldi is a remarkable little grocery store with eye-opening pricing, surprising selections and an appeal that has long since outgrown a reputation as a store only for those who need it. Still, there was some noteworthy elements of its arrival. It marked Aldi’s first store in Long Island’s populous Nassau County, just a few miles across the border from New York City’s borough of Queens. 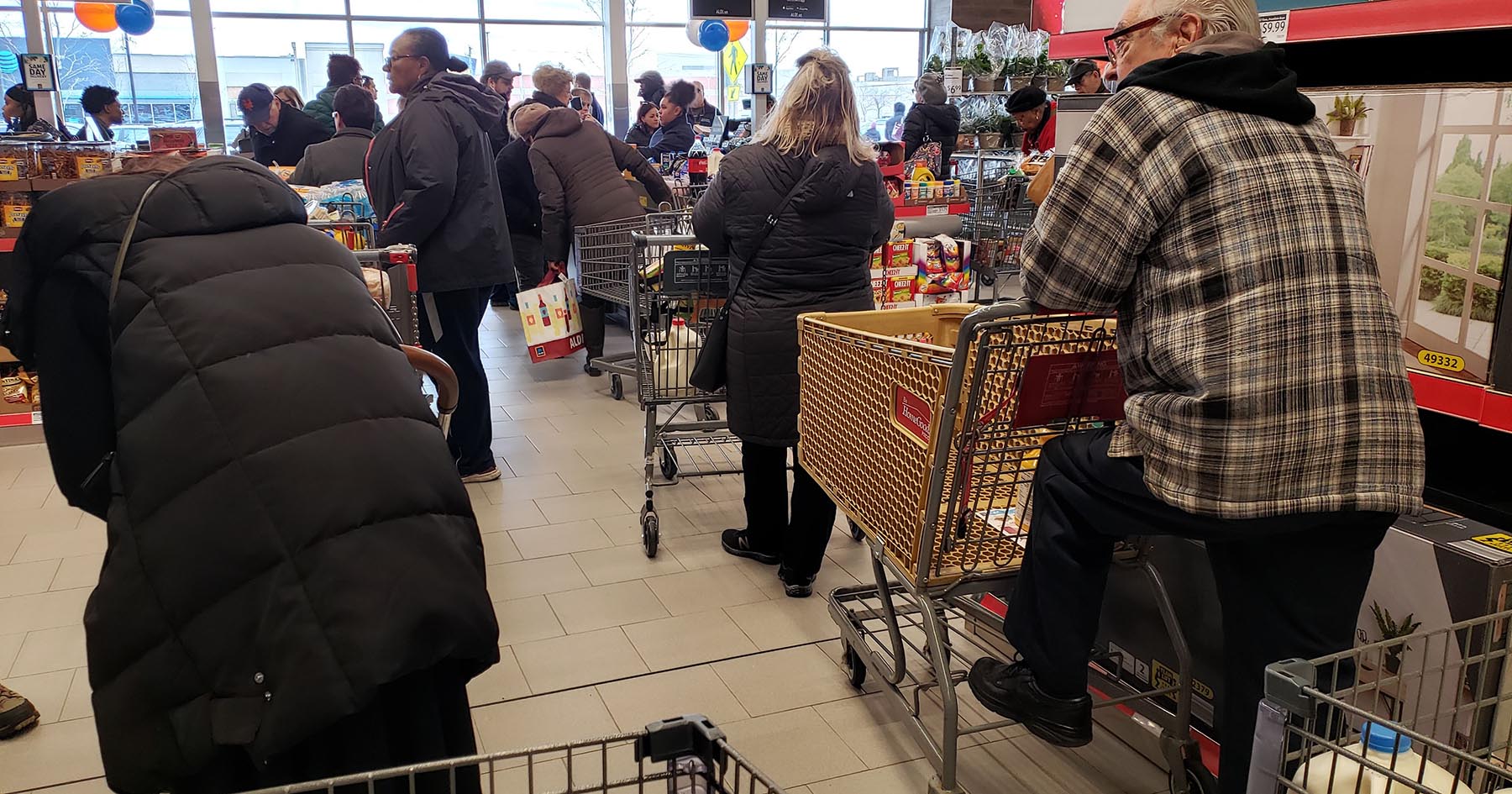 Long Island shoppers are witness to a radical turnaround in its food retail makeup. Aldi, which already has several stores further east in Suffolk County, has another on the way to North Babylon soon. Aldi’s discount rival Lidl is in the process of reopening about a dozen acquired Best Market stores while also pursuing new sites on the Island, its officials say.

These efficient grocers are popping up in a market that’s seen the brands it grew up with—A&P, Waldbaums and Pathmark—disappear, while waiting for the Federal Trade Commission to rule on the fate of the Island’s oldest supermarket brand, King Kullen. Stop & Shop announced plans more than a year ago to take it over. That deal, expected to close any time now, will undoubtedly result in some spinoffs, sources say, and no one should be surprised if Lidl and Aldi aren’t first in line to gather in sites, at least if they can be unwound from union obligations.

Stop & Shop, for its part, is simultaneously investing millions in each of its Long Island units as part of its corporate “Reimagine” campaign, modernizing a large but fairly uninspiring fleet behind new merchandising and click-and-collect offerings.

The new Aldi also resides in an interesting neighborhood. It occupies the nearest corner of a power strip center adjoining the venerable Green Acres shopping mall—itself a longtime destination for regional shoppers—with the opposite corner occupied by a Walmart Supercenter. That store represents the closest the Bentonville, Ark.-based retail giant has ever gotten to New York City, and its massive sales volume has been frequently advanced over the years as evidence of unmet demand for the brand in the five boroughs. In other words, many city shoppers flocking to Long Island for bargains will now encounter Aldi first.

Store openings can be useful events for people like me. It’s a chance to check the pulse of the industry, hopefully encounter some corporate folks to pump for insights and, finally, to get some midweek shopping done. I spoke briefly with two corporate people on the floor, but in true Aldi fashion, they politely referred specific questions to their PR agency in Chicago and offered little more than a tour and declined to be photographed. I totally get why Aldi does this for Aldi’s sake, even if creates inefficiencies for me.

The store opening traffic created lots of congestion approaching the eight checkout lanes, obscuring in particular the Aldi Finds aisles, which this week featured curtains, furniture, fire prevention equipment and kitchenware. (I had to awkwardly reach between shoppers to get a scented candle in my basket.)

Waiting in the checkout line provided an opportunity to observe how Long Islanders are simultaneously demanding and resourceful. I was beside a woman whose basket had two items: one bag of popcorn and 24 gallon bottles of milk. In conversation, she explained she had a catering business and shopped where the bargains were. Milk, she said, was $1.89 a gallon both here at Aldi and down the lot at Walmart, but the latter restricted quantities. For what it's worth, 24 gallons of milk is the perfect size order to cover the entire surface of an Aldi cart: five neat rows of four bottles each in the basket, and four across the child seat, beautifully snug. Wouldn’t an order like that be better served at BJ’s Wholesale Club? “It’s $2.39 there,” she said, and I don’t for a second doubt her.

In front of her was a guy who’d evidently had the same issue I’d had when entering—but he solved the problem by commandeering a cart from the Home Goods store next door. A woman in front of me told me it was her first visit to an Aldi. Her mother up in Rockland County, N.Y., swears by it, she told me, but a first impression left her undecided if this was where she wanted to shop all the time. Our conversation also revealed she held the common misperception that Aldi owned Trader Joe’s. Shifting into geek mode, I explained it’s more complicated than that—that Aldi is actually two companies, and one of them has a complex connection to a third company in Trader Joe’s, but they all profess to be separate entities. 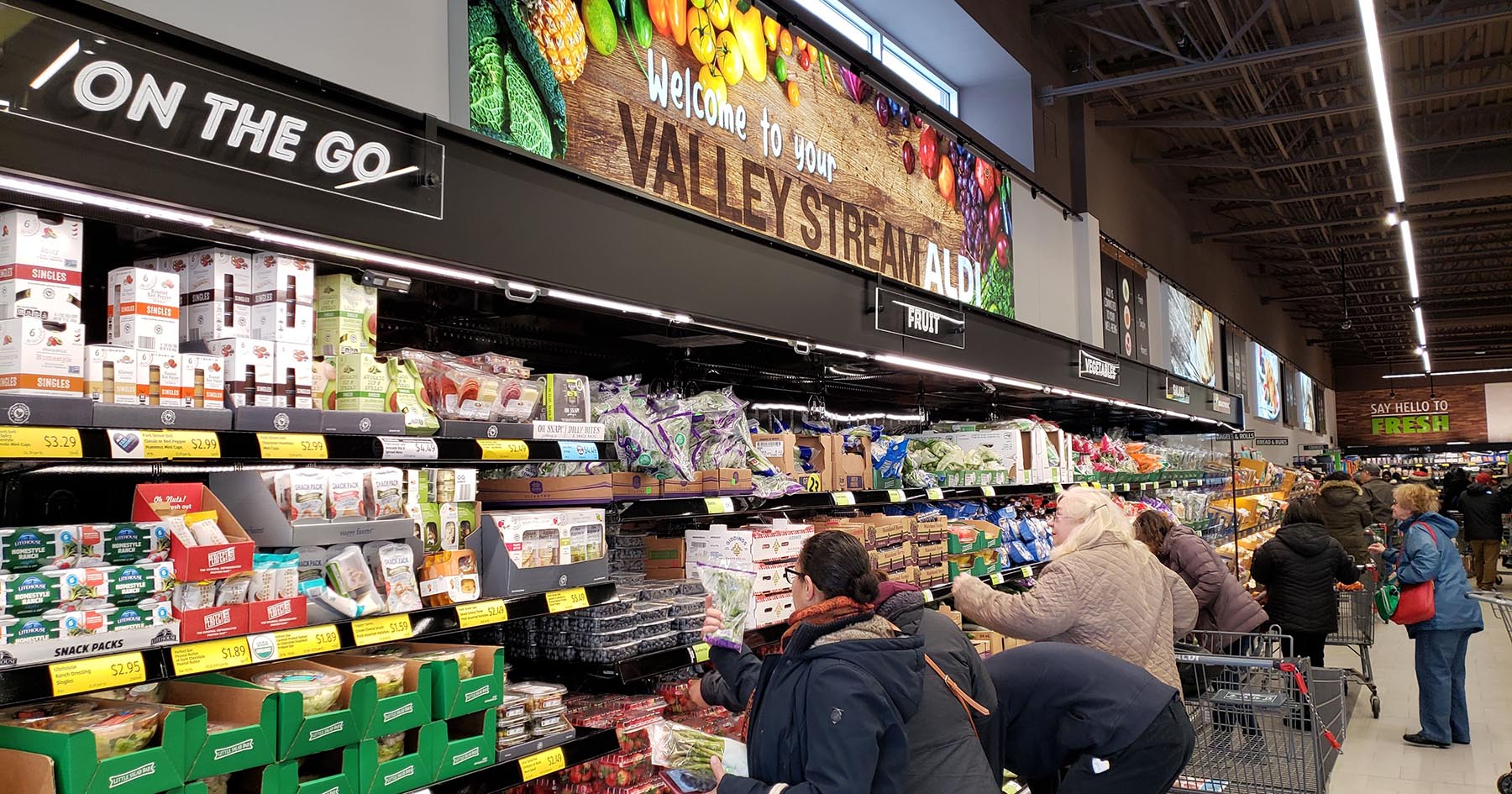 Until, at least, they’re not. Reports out of Germany this week are suggesting that Aldi Sud (the company that controls the Aldi brand in South Germany and in countries including the U.S., U.K., Australia and China) and Aldi Nord (the company that runs Aldi stores in northern Germany and in places like the Netherlands, France, Belgium and Spain and has a convoluted connection to Trader Joe’s) have discussed a plan to begin to reunite.

The report in Berlin’s Manager Magazine—unconfirmed by the companies—cites internal documents proposing they begin to cooperate in areas such as buying and private brands no later than 2022. That would mend a 60-year-old division evidently prompted over a disagreement between the founding Albrecht brothers as to whether they should sell cigarettes.

Should that come to pass, the elimination of duplicate structures and a potential U.S. melding of Aldi and Trader Joe’s could unleash the ultimate in efficiency: carts clicking together and returning not a quarter, but billions in savings. And there will be so much more to unpack about this fascinating and still very mysterious juggernaut.