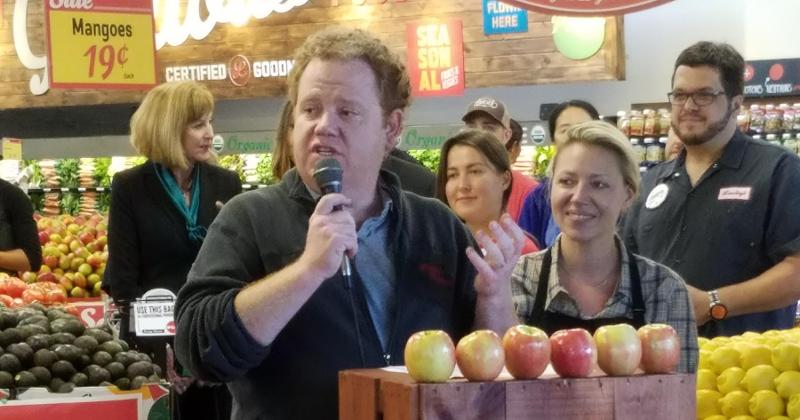 The husband and wife team that founded Lucky’s Market has entered into a purchase agreement with the company to take over the seven Lucky’s Market stores that will remain open following its parent company’s bankruptcy.

Bo Sharon, who also served as Lucky’s Market parent company CEO, and his wife, Trish, are leading a group of buyers for the remaining stores located in Traverse City, Mich.; Cleveland and Columbus, Ohio; Columbia, Mo.; Melbourne, Fla.; and North Boulder and Fort Collins, Colo., according to a statement from the company. The move would preserve about 600 jobs.

“We are grateful to our wonderful team members and customers for all their support, dedication and loyalty over the years,” Bo Sharon said in a statement. “While this is a difficult situation across our company, we remain passionate and optimistic that we can continue to offer our communities access to healthful foods in this smaller footprint, preserving hundreds of jobs.”

Lucky’s said last week it would close 32 of its 39 stores, and earlier this week, it filed for Chapter 11 bankruptcy protection to facilitate the sale of its assets, citing heavy losses, declining same-store sales and inadequate funding after benefactor The Kroger Co. withdrew its financial support. At that time Lucky’s acknowledged it was in negotiations to complete a sale of the remaining stores but hadn’t identified a buyer.

The purchase is subject to court approval. A price was not disclosed.

The Sharons met in cooking school and founded Lucky's outside Boulder, Colo., in 2003. An ambitious expansion focused on Florida followed, gaining financial support from Kroger.

As previously reported, Publix Super Markets and Aldi Inc. have separately entered into purchase agreements for groups of closing stores. Those deals will also be subject to higher offers in a court-approved auction.

Lucky’s said it continues to have active dialogue with various additional potential buyers.

At the time of the filing, the company had sufficient cash on hand and an agreement for the consensual use of cash collateral to meet financial obligations, including those to its employees and vendors.

PJ Solomon is Lucky’s investment banker. Polsinelli is serving as its legal counsel, and Alvarez & Marsal is serving as the company’s restructuring adviser. The case is being heard in U.S. Bankruptcy Court in Wilmington, Del.