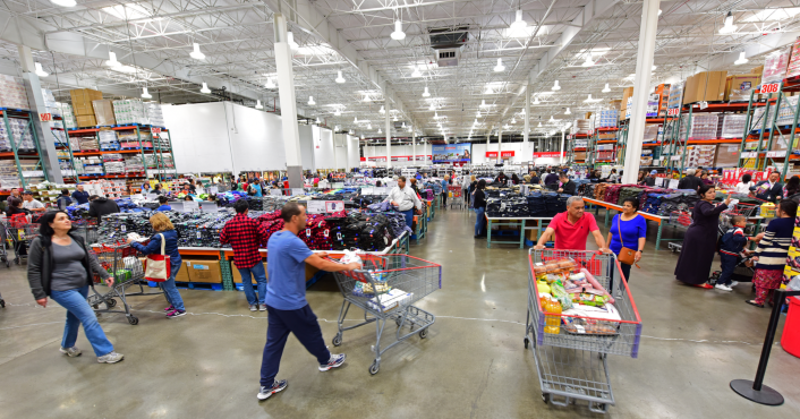 But in an "increasingly inflationary environment," said Richard Galanti, EVP and CEO of the Issaquah, Wash.-based wholesale club, gross margin in the quarter was down 32 basis points year over year. For core goods, margins were lower by 40 basis points, led by declines in fresh-food margins as Costco opted to delay or mitigate price increases on items such as fresh meat as costs spiked.

Overall, costs within fresh foods are up in the mid- to high single-digit percentages, he said, with meat costs up in high single to low double digits.

"It's a lot of fun right now," Galanti said on an earnings call with investors and analysts, ticking off the inflationary pressures Costco is seeing: "Higher labor costs, higher freight costs, higher transportation demand, along with container shortages and port delays, increased demand in certain product categories, various shortages of everything from computer chips to oils and chemicals, higher commodities prices."

And while "We're not going to change the price of muffins every week," Galanti said, continued rising costs have pushed the company to raise its estimates for sell prices to the 3.5% to 4.5% range, up from an estimated 2.5% to 3.5% at the close of the company's third quarter in May and 1% to 1.5% back in February.

Galanti noted that the club, which saw traffic up 8.8% for U.S. stores in the quarter, had re-instituted purchase limits on some items, including toilet paper, paper towels, select cleaning products and Kirkland Signature water as demand surged alongside a delta-variant-fueled nationwide surge in new COVID-19 cases. Those purchase limits also reflect supply-chain headaches that have changed in the past year, he said.

"A year ago, there was a shortage of merchandise," Galanti said, speaking specifically about a popular variety of national-brand disinfecting wipes. "Now they've got plenty of merchandise, but there's two- or three-week delays on getting it delivered because there's a limit on short-term changes to trucking and delivery needs." Those kinds of logistical challenges are "all over the board," he said.

For hardlines, rollout times have increased to 16 to 18 weeks from eight to 12 weeks, and clubs are generally selling merchandise within two weeks of when it's received, Galanti noted. Echoing comments made by other retailers, including Target, this earnings season, the company is also ordering "more and earlier" ahead of the holidays and bringing in some high-demand gifts, including toys, earlier. In an effort to gain additional control over its supply chains, Costco has chartered three ocean vessels for the upcoming year to transport containers between China and the U.S. and Canada, he said.

In brighter news for the company, renewal rates ticked up slightly to 91.3%, an increase of 0.3 percentage points from the third fiscal quarter. For the fiscal year, Costco opened 20 new locations and relocated two others. For fiscal 2022, the company is looking to open at least 25 new units and relocate five others. On the customer-facing technology front, digital payment using the Costco credit card is in test at several locations, Galanti said, with a full rollout expected by mid-October. Club members also will find a new landing page and improved mobile site by the end of next month, he said.

More members are auto-renewing, Galanti noted, and first-year renewal rates have improved, as well. Members' strong affinity for their clubs places Costco in a good position heading into fiscal 2022 despite the sundry supply-chain challenges and inflationary pressures the company is contending with, Galanti indicated—and Costco isn't taking it for granted. "Despite all these issues, we continue to work to mitigate cost increases in a variety of different ways and hold down and/or mitigate our price increases passed on to the members," he said.