Costco Wholesale Corp. is the new value leader among online retailers, surpassing Amazon, which held the No. 1 spot since 2010, according to the American Customer Satisfaction Index (ACSI) Retail and Consumer Shipping Report 2018-2019.

The ACSI determines customer evaluations of the quality of products and services available to U.S. consumers, with all measures reported on a scale of 0 to 100.

With its retail business growth slowing since its acquisition of Whole Foods Market, Amazon retreated 4% to an ACSI score of 82, matching the combined score of smaller online retailers, which are up 1% year over year, per the report.

Target Corp. trails Amazon in internet retail with an ACSI score of 80, while Walmart Inc. anchors the bottom of the category with a score of 74.

What’s more, the internet remains consumers’ preferred method of shopping, despite falling 2.4% to an ACSI score of 80.

Whether diving into e-commerce due to “fear of missing out” or approaching the category with a strategic initiative, grocers have been focusing on their online offerings, including delivery and curbside pickup, often with third-party vendors such as Instacart. Yet, customers reported no improvement in the online shopping experience compared to a year ago. In fact, most aspects have declined, including desktop checkout and payment process (down 2%), navigation (down 2%) and site performance.

However, the report found that mobile apps received high marks of 86 for quality and 85 for reliability.

Overall customer satisfaction with retail is down for the second year in a row, with the retail trade sector slipping just under 1% to a score of 77.4%.

“There is a slump in customer satisfaction in every category of the retail sector,” David VanAmburg, managing director, ACSI, said in a statement. “Internet retail versus brick-and-mortar retail, department stores versus specialty stores, it’s all down. Considering the importance of retail to overall consumer spending, this decline is a big deal.”

The report indicates that the widespread deterioration in retail customer satisfaction is due in part to underwhelming customer service as the industry is challenged with low employment and higher employee turnover. As such, retailers are tasked with finding and training new employees to offset staff shortages, which puts a strain on customer service.

“Historically, the ACSI has found that the more service typically required for a given industry, the lower the customer satisfaction, and it rings true for retailers this year,” VanAmburg said. “Things like courtesy and helpfulness of store staff, call center support and even availability of merchandise on the shelves all have a service element and have seen drops from a year ago.” 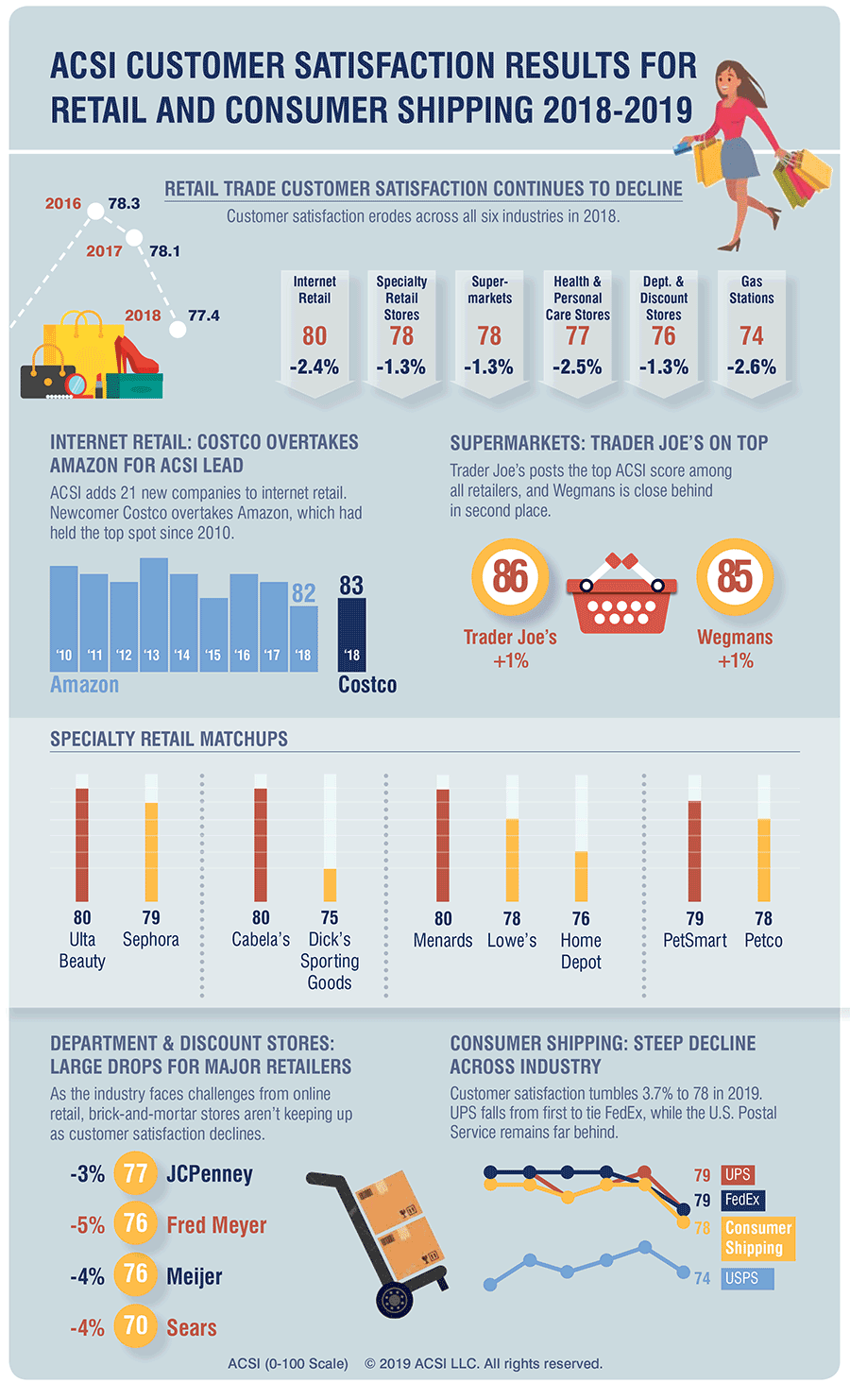 Customer satisfaction with supermarkets sank 1.3% to an ACSI score of 78, according to the report. However, Trader Joe’s Co. and Wegmans Food Markets showed 1% improvements over the last year, with Trader Joe’s rising to a score of 86—bringing it to the No. 1 spot across all supermarkets and retailers, including e-commerce giant Amazon (82)—and Wegmans rising to a score of 85.

After emerging from a Chapter 11 bankruptcy and a bout of store closures, Southeastern Grocers saw the biggest decrease, falling 3% to 76. Yet, Walmart remains at the bottom of the category, dropping another 1% to 72.

Publix Super Markets fell 2% to tie with Aldi, which remained unchanged, at 84. Costco also remained unchanged in the supermarket category, with a score of 83, while most other large chains declined. For example, H-E-B slipped 1% to 82, and Sam’s Club dropped 2% to 80.

Whole Foods also dipped 2% to 79, despite its acquisition by Amazon, bringing it to a tie with BJ’s Whole Sale Club (down 1%), Hy-Vee Inc. (down 2%), The Kroger Co. (down 2%), ShopRite (unchanged) and the combined score of smaller supermarkets (down 2%).

Customer satisfaction with department and discount stores fell 1.3% to an ACSI score of 76 as the industry struggles to adapt to the shift to online shopping, according to the report, noting that in-store customer service also fails to live up to customers’ expectations.

However, Costco leads the category with a stable score of 83, followed by Sam’s Club, which remained unchanged at 80.

ACSI measures and analyzes customer satisfaction of more than 400 companies in 46 industries and 10 economic sectors, with its scores based on data from interviews with roughly 300,000 customers annually. To view the full report, click here.