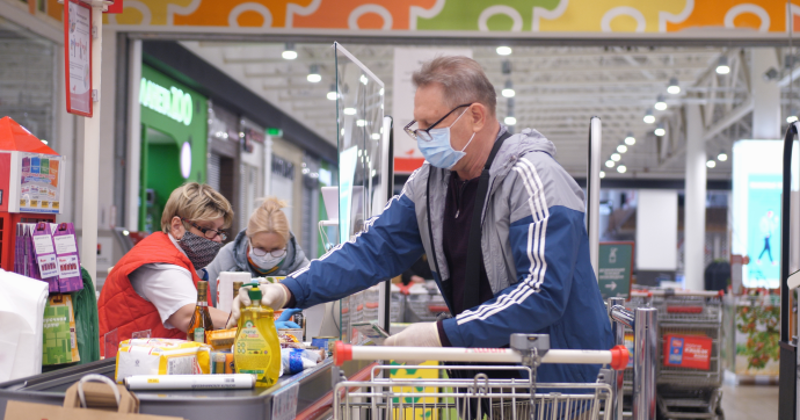 The prices that U.S. consumers found at the grocery store in April were up 1.2% year over year, a deceleration from the 3.3% year-over-year climb recorded in March, according to the Bureau of Labor Statistics' latest CPI report.

As more Americans get vaccinated against COVID-19, states relax capacity limits for food and drinking establishments and some workers return to offices, more consumers are venturing back into restaurants and other away-from-home eating venues—and that's limiting grocery retailers' pricing power, some analysts say.

In contrast, prices at restaurants (food away from home) were up 3.8% year over year in April after rising 3.7% in both February and March.

April's deceleration in price hikes for food at home comes as costs for producers and stores themselves are on the rise. The bureau's April producer price index, out May 13, will shed more light on inflationary conditions for producers, but as a snapshot, protein mega-producer Tyson Foods said earlier this week that it is seeing "substantial inflation" across its supply chain, with costs climbing for raw materials and animal feed, packaging, freight and labor.

"We certainly can't eat all the inflation that we're experiencing now," Tyson Chief Operating Officer Donnie King told investors and analysts in an earnings presentation, noting that the company is engaged in conversations with customers about the need to adjust their own pricing in light of cost inflation.

"Food at home's disappearing pricing power is a large problem, with input costs unlikely to relent," analysts with MKM Partners stated in a report following the release of April's CPI numbers. Retailers' fear of being unable to pass along higher costs to value-conscious consumers who are already beginning to decrease their dining-at-home occasions is likely to further stress thin margins in the industry. (In a webinar earlier this month, FMI–The Food Industry Association and market researcher IRI reported that 42% of households in March said they were preparing the vast majority of their meals (more than 90%) at home, vs. 58% who said the same in March 2020.)

Examining city and regional price increases for food at home can offer a better look at the situation for retailers as restaurants reopen, MKM Partners Executive Directors Bill Kirk and Brett Levy noted. "For instance, in the Northeast, where restrictions had been slower to lift, food-at-home inflation has fallen meaningfully from 2.5% [year over year] in 4Q to 1.2% [year over year] in March," they wrote. In New York, where the restaurant capacity limit rose to 50% in mid-March, they added, food-at-home prices rose 0.3% in April after climbing 2.7% in March and more than 4% as recently as November and December.

Delving further into April's CPI numbers, grocery prices rose the most within the fruits and vegetables category: Produce prices were up 3.3% year over year in April vs. 3.8% in March.

Regionally, grocery store prices climbed the most in the West in April (up 2.1% year over year), continuing a trend seen since August. By contrast, prices in the Northeast were flat in April and climbed a meager 0.6% in the Midwest. Price increases in the South, after being north of 3% for the past year, were up 1.6% in April.