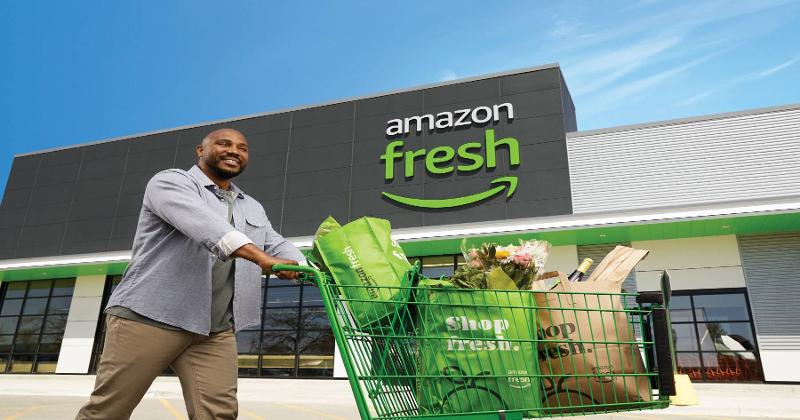 From plans to expand its Just Walk Out technology to Whole Foods Markets to the end of free grocery delivery for Prime members to competitive partnerships in Europe, Amazon continues to strategically tweak its presence and offerings in the food and beverage realm. The Seattle-based e-tailing giant, which acquired Whole Foods in 2017 and more recently, launched its own grocery chain—the rapidly growing and international Amazon Fresh—has tackled the grocery business as aggressively as it has scores of other industries. But has its might met with a cohesive brand strategy?

“Amazon needs to, as time goes on, greater harmonize the branding program of their overall grocery offering,” said Jack O’Leary, head of advisory, N.A. for Edge by Ascential during the technology and data provider’s recent Amazon Brief webinar.

O’Leary added that Amazon’s announcement last month that it would end free delivery from Whole Foods Markets on orders of $35 or more for Prime members and begin charging $9.95 on each grocery delivery nationwide beginning October 25, is a “step in the right direction.”

Given the cost of last-mile delivery, Amazon has shifted the burden of at least some of its operational expenses to the consumer, while at the same time offering an alternative: Free curbside pickup from Whole Foods Market.

“I think this is an effort by Amazon to somewhat harmonize their grocery delivery offering,” continued O’Leary. “They want to push more people into a singularly branded identified system that would be the Amazon Fresh program here, and then I think that they are going to encourage those shoppers that are really loyal to whatever differences in experience they can get from the Whole Foods brand—they’re going to try to push them towards doing things like pick up. We believe that’s the effort we’re going to see going forward.”

In perhaps another step toward a more cohesive brand approach in grocery, Amazon announced last month that it would introduce its Just Walk Out technology, already available at its Amazon Fresh and Amazon Go locations, to two Whole Foods Markets next year—one in Washington D.C. and a second in Sherman Oaks, Calif.

With Just Walk Out, shoppers can scan their Amazon account on a mobile device upon entering the store, shop, and thanks to Amazon’s computer vision and shelf-weighting technology, walk out of the store without going through the checkout line.

“You can imagine how seamless, and great, and transformational a shopper experience that is and how much it ups the table stakes against other retailers when Amazon is offering this to the market,” said O’Leary, who adds that while Just Walk Out was originally relegated to smaller stores, Amazon has met the challenge in expanding the technology to unpackaged product types like produce and broadened its capabilities across larger footprint stores.

Both the D.C. and Sherman Oaks stores are new, making installation of the Just Walk Out technology possible from the start. “I don’t know how readily Whole Foods could retrofit existing stores with this technology. It seems like a substantial investment,” added O’Leary. But its something to watch, particularly for the competition.

“I think the top takeaway is: One, if you’re a branded manufacturer with any sort of food, beverage, grocery-in-general relevance, Amazon is increasingly—at least from a customer experience perspective—an intensely relevant platform in the store-based environment right now. If you’re a retailer, Amazon has forever escalated shopper expectations around things like delivery speed. Well, think about Amazon’s new developments in the U.S. around elevating shopper expectations around removing friction from the shopping experience, i.e. the top friction point in a shopping experience—the checkout,” he noted. “[Amazon] is just upping the competitive table stakes here.”

The webinar also included an update on Amazon’s grocery expansion abroad, where the company is “a little less hands-on” than in the U.S., O’Leary observed.

“Amazon has opted in most European markets to partner with amenable grocery platforms who are looking to stand up their delivery/tap into the Amazon Prime member consumer base,” he said. From Monoprix in France to Morrisons in the U.K. to a few platforms in Spain, “it seems Amazon is looking to be the logistics of delivery [provider] from an actual branded grocery store to the shopper’s doorstep.”

Most recently, COOP in the U.K. has announced it will join other retailers, including Morrisons, as an Amazon partner. Initially launching in Glasgow and surrounding areas, COOP has said it will expand its Amazon delivery offerings to other parts of the U.K. before the end of the year, with the intention of eventually going nationwide with the service.

“This is a trend that’s here to stay,” said O’Leary. “It doesn’t seem that we’re seeing European grocers shy away from [these] partnerships with Amazon. So, I think … that the path forward for Amazon’s full basket, perishable grocery delivery program in Europe … is to be the intermediary, rather than wholly on their own like we see in the U.S.”

Calling it an expansion of the “Amazon ecosystem” through partnerships, O’Leary pointed to Amazon’s investment in Deliveroo as another example of collaborative relationships fueling a path forward. Amazon Prime members who sign up for Deliveroo can get one year free. The symbiotic relationship allows Deliveroo to attract more new trial and first-time customers, while Amazon can offer more enhancements to the Prime Membership value stake, said O’Leary.

“Competitively Amazon gets stronger and Deliveroo gets a boost,” he said. “It’s total ecosystem advancement.”