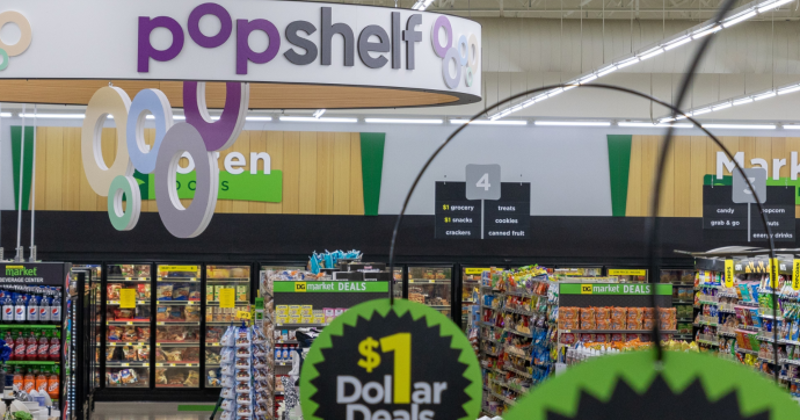 The store-within-a-store is Popshelf, a nonconsumables-focused concept that the Goodlettsville, Tenn.-based retailer introduced in October. Most of Popshelf's home decor, seasonal entertaining and health and beauty items are priced below $5, and Dollar General positions the concept as offering a “fun, joyful and guilt-free shopping experience.”

Since last fall, Dollar General has opened 16 standalone Popshelf stores in three states; the company plans to have around 25 hybrid DG Market + Popshelf stores open by the end of the fiscal year. Online ordering also is available at www.popshelf.com.

The first two combo locations are at 2907 Highway 31 West in White House, Tenn., and 4491 Lebanon Pike in Hermitage, Tenn. The new format, Dollar General CEO Todd Vasos said in a news release, gives DG the opportunity to “deliver the value and products our customers trust from a DG Market with the continually refreshed merchandise…[of] Popshelf.”

Across its growing number of formats—traditional Dollar General stores, Popshelf, hybrid stores and the urban convenience market DGX—Dollar General continues to be on a tear with store openings. In June 2019, the company operated around 15,600 stores. As of the end of April, that store count stood at 17,426, according to the company.

Back in December, Dollar General announced that it planned to open 1,050 new locations this year as well as complete 1,750 store renovations. The company earlier this month said it planned to hire as many as 50,000 new employees between July and Labor Day.

In Tennessee, grand opening celebrations are set for July 31 for both new DG Market + Popshelf locations. The first 100 adult shoppers will receive a $10 gift card, and free coffee, snacks and product samples from participating brands will be available while supplies last. Customers also will have the chance to enter to win $500 toward their Dollar General purchases.