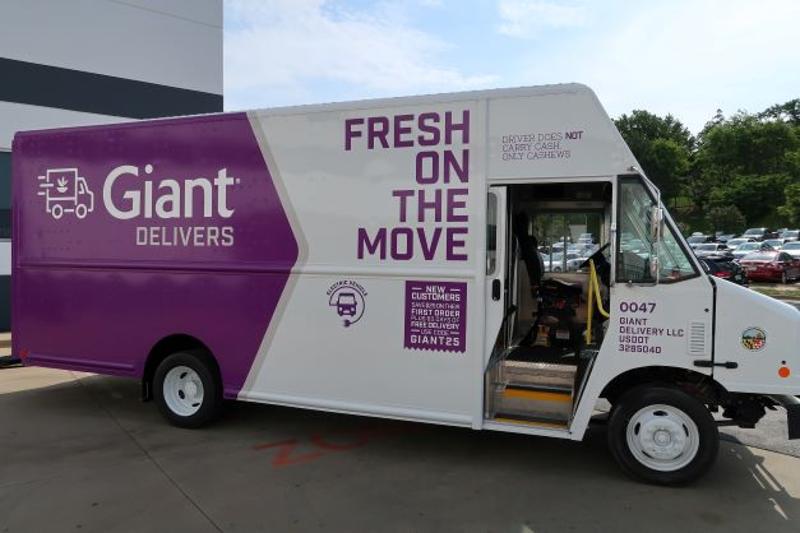 The Ahold Delhaize-owned grocer, which operates 164 supermarkets in Virginia, Maryland, Delaware and Washington, D.C., said the addition of the electric trucks was made possible by a grant awarded through the Maryland Energy Administration's Clean Fuels Incentive Program. In a news release, Giant Food said it plans to electrify more of its Giant Delivers fleet over the next several years.

"The deployment of these first two vehicles marks the next stage in Giant's commitment to making a positive environmental impact," the company stated. Operating out of Giant Food's Hanover, Md., warehouse, the two trucks—purchased from Motiv Power Systems of Silicon Valley—offer the same grocery storage capacity as gas-powered trucks and can cover 105 miles on one charge, letting drivers omit fuel stops during their daily deliveries, Giant said.

"Cleaner transportation is part of Giant's larger sustainability efforts and commitment to supporting the local environment," Giant Food VP of Distribution Operations Joe Urban said. "We are excited to bring these vehicles into our Giant Delivers fleet and kick off the transition to all-electric delivery."

Earlier this week, Walmart announced plans for adding electric trucks as well as natural-gas and hydrogen-powered vehicles to its fleet as the retailer seeks to reach zero carbon emissions by 2040.