Masks have become a hot button issue for retailers. Whether a state mandates them to be worn or it is company policy, the result is the same, employees are being put on the front lines of enforcement, often with little to no training on how to do it. A stock person may now be asked to act as a kind of “bouncer.” The situation is ripe for confrontation with videos of customers—and employees—behaving badly going viral on a weekly basis. One encounter was deadly, something that all retailers want to avoid.

Several retailers have developed suggestions for staff on how to handle the situation, but when one of the first suggestions is to smile at customers—a gesture that is rendered moot when your mouth is covered by a mask—some additional advice might be welcome.

Russ Turner, director of People Incorporated’s Training Institute, offers suggestions on how retailers can help prepare and train employees to start the encounters in the right manner and how to de-escalate situations should they become heated.

The most important thing is that employees check in with themselves first, because they have to remain very neutral and non-emotional, Turner said. “They’re really venturing into this world of mental health for which they’re not really trained and not prepared,” he added. “Because if someone with an anxiety disorder walks into your store, guess what? You’re a mental health worker now. So that’s fun.”

Paying attention to body language is also critical. Confrontational or defensive body language on the employee's part is a recipe for disaster. They need to look assertive, but keep their posture very neutral. Being aware of what their hands are doing also is key, Turner said, as people tend to let their hands come up high when agitated or exasperated. Supervisors should also be careful about who they select to stand at the door making the requests. They should have laid back and friendly personalities but able to handle pressure. If someone cries when yelled at, this is not the person to handle the job properly.

Employees also should role play how these conversations may work out, either with themselves or other staff members. Turner suggested role playing these scenarios in staff meetings so everyone gets used to handling many possible situations. Write down the common responses customers have to the request and role play how to react to those comments. He equates the role playing to asking someone on a date. “You prepare for things like that,” he said. “Like, ‘What am I going to say?’ The training is to get that strategy down so that you have something in your head. You don’t just wing it.” 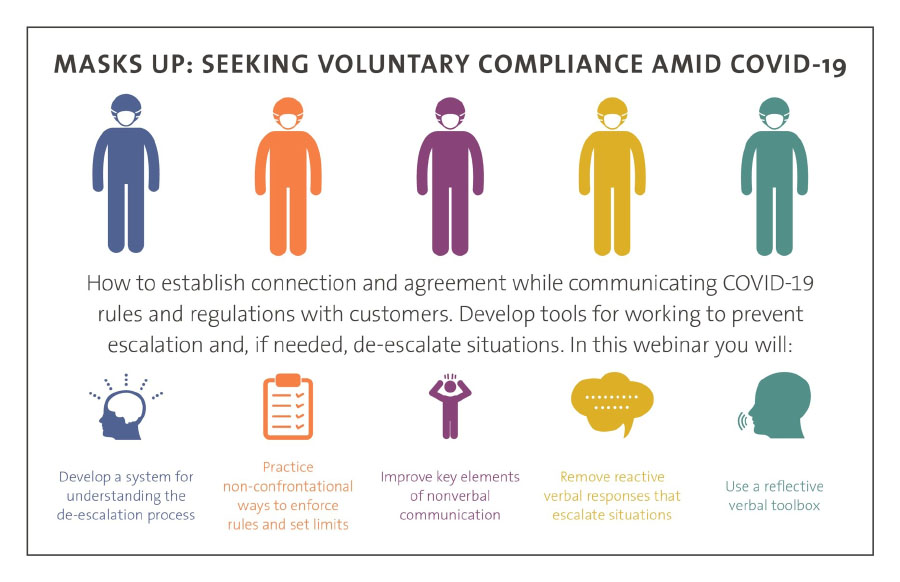 Turner has developed a three-step strategy that employees can use to help elicit positive reactions from customers when they are asked to put on a mask.

However, employees can use all these techniques and still run into a customer who absolutely refuses to comply. Rather than force the issue or not allow them access to the store, Turner suggested just letting the customer in. “It can’t be worth physical violence to make people comply,” Turner said. “It’s kind of like the 80/20 rule. If 80% of the people put a mask on, that is not bad.” Everyone would rather it be 100%, but “people get very stressed and emotional about the issue right now, but it’s not a character flaw to not want to wear a mask,” he says. “It doesn’t have anything to do with education and it shouldn’t have anything to do with politics. We’ve got to frame it as a stress problem, like the person is super anxious. If you frame it like that, it’ll be helpful.”

Also, encourage other staff members to pay attention to what is happening at the door. They should also be trained in these techniques so if they see the employee begin to lose their cool, they can step in to handle the situation without it escalating into a viral video of either the customer or the employee behaving badly.

If retailers want to learn more about Turner’s tips for handling this new, but delicate, mask-wearing situation, he offers a one-hour course called Seeking Voluntary Compliance Amid COVID-19.