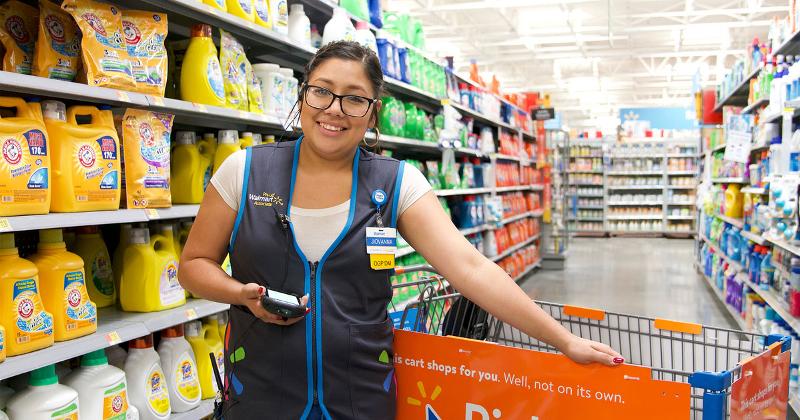 Walmart is maintaining a strong competitive position in the U.S., particularly behind grocery, where a combination of price competitiveness and omnichannel offerings such as delivery and pickup led to a 3.2% comparable-store growth in its fiscal third quarter. Comps, which increased by 6.6% on a two-year stacked basis, reflected increases in store traffic and average ticket and online sales, the Bentonville, Ark.-based retailer said.

While food powered a 41% boost in e-commerce sales in the quarter and contributed 170 basis points to the quarterly U.S. comp figure, it comes as something of a mixed blessing for CEO Doug McMillon, who, in prepared remarks, indicated impatience to bring the same momentum to the retailer’s general merchandise online offering, thereby improving the overall profitability of its big but costly online business.

“We need to translate this repetitive food and consumable volume into a stronger Walmart.com business that’s profitable over time, so that’s what we’re working on,” McMillon said.

“We’re making progress on many fronts, but we need to do more and move faster, especially with our assortment, including marketplace,” McMillon added. “I continue to challenge the team to drive a deeper, more sustainable relationship with the customer, better execute the fundamentals and improve the overall economics of the business.”

Walmart has effectively used grocery to build online sales, but the company needs shoppers to put higher-margin items in the basket to drive profitability. “Our strength is being driven by food, which is good, but we need even more progress on Walmart.com with general merchandise,” McMillon said. “We’re mixing the business out better to achieve better margin rates, but there is more work to do.”

For the quarter, which ended Oct. 31, Walmart posted overall sales of $128 billion, a 2.5% increase adjusted for currency. Operating income declined by 4.1% on a constant currency basis, reflecting effects of international investments such as the India-based retailer Flipkart and accelerated price and technology investments in Sam’s Club. The operating income decline improved by 1.7% vs. last year’s third quarter, Chief Financial Officer Brett Biggs said.

U.S. sales increased by 3.2% to $83.2 billion. Sam’s Club sales totaled $14.6 billion, a 0.7% increase, with comps improving by 0.6%. Transactions at Sam’s increased by 5.7%, but average ticket showed a 5.1% decrease, reflecting effects of a 32% increase in e-commerce growth for that division. International sales increased by 1.3%, or by 4.8%, excluding currency effects. That division was affected by negative comps in South America and in the United Kingdom, where Walmart was unable to complete a deal to sell its Asda chain. Overall net income of $3.3 billion was up by 92.3% as compared to last year’s third quarter. Earnings per share of $1.15 topped analyst estimates.

Walmart's U.S. sales were powered by a mid-single digit comp growth in fresh foods, where improvements in areas such as bakery and meat were resonating with shoppers. “We’ve focused on improving fresh presentation and product quality, and this has resulted in stronger sales and market share gains, according to Nielsen,” Biggs said.

Analyst Karen Short of Barclays in a note to clients this week indicated Walmart was positioned to accelerate grocery gains in the current fourth quarter and into next year by driving a better fresh profile through the emerging “Produce 2.0” merchandising initiative and continued price investments.