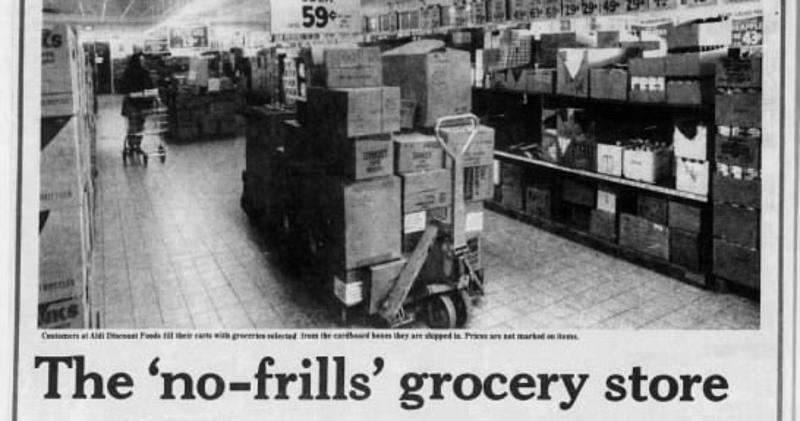 In late March of 1976, a Giant Food store in the Kmart Plaza in Iowa City, Iowa abruptly closed for renovation.

A little more than three weeks later, the store reopened as the first Aldi in the United States.

The conversion was among dozens of Aldi stores that would suddenly be popping up around Iowa, Illinois and Missouri in coming weeks and months. With the country recovering from a 16-month recession marked by high unemployment and high inflation, there were any number of  discount supermarket schemes in the works, but Aldi was a different animal entirely. It took some explaining.

An advertisement in the same newspaper dated April 26, 1976 detailed “10 Reasons Why Aldi Sells for Less” including some things that were revolutionary for its time and others that are still staples of the hard discount format today. “We have no bags. Bring you own box or bag—we pass these supply savings to you,” was one. “We have no fancy shelving. We sell right from the original carton—less handling means savings for you,” was another. 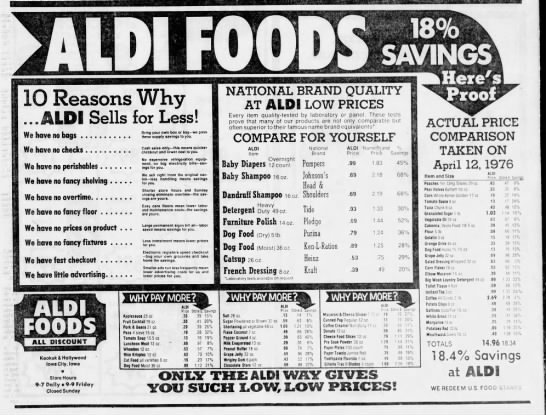 Back then, the idea that prices weren’t stamped onto every item but rather, indicated on signage alongside the display, took some getting used to—but Aldi cast it as “labor saved means savings for you.” The debut store carried just 450 items with prices for every one printed on paper sheets customers could take with them as they shopped. Early reports indicated cashiers would remember them all; in fact, it was modern electronic registers that sped checkout.

Other things would change. The original Aldi store included no refrigeration equipment or freezers, so perishables were limited to onions, potatoes, bread and margarine (another early store in Des Moines was said to carry just onions, potatoes, bread and grapefruits). The treasure hunt of the Aldi Finds section, coin-released shopping carts and payment by credit card were also still in the future, but the idea that U.S. consumers would shop for private label foods in a no-frills environment if only the price and quality were there had been established in a way that no store had before or since quite as successfully.

Aldi expanded to U.S. from Essen, Germany via an undisclosed investment in Benner Tea Co., a Burlington, Iowa grocer with origins in the early part of the century. That company had been first acquired in the 1960s by Charles C. Fitzmorris Jr., who himself would go on to noteworthy things.

A son of a former Chicago police chief, Fitzmorris, known as Charlie, was a 1933 Princeton graduate and former World War II battalion commander who first got into the grocery business unloading freight train cars for A&P. Fitzmorris was a brash and ambitious businessman who according to one source had actually proposed that Benner buy Aldi, and not the other way around. But he made enough of an impression upon Aldi’s founding Albrecht family that its Aldi Sud division sent scion Karl Albrecht Jr.—then on a jaunt gaining U.S. retailing experience with Sears—to check out Benner’s stores.

Fitzmorris in turn trained under Aldi executives in Germany and became the first president of what was then known as Aldi-Benner Tea Co., before leaving to further pursue the pioneering use of electronics in grocery. He founded World Wide Chain Store Systems, which specialized in food management software and counted among its clients nearly all of the largest U.S. grocery chains. It was eventually sold to IBM. Fitzmorris’ Benner Tea colleague, the above-mentioned Phillip Neally, succeeded Fitzmorris and served as Aldi’s U.S. CEO through 1999.

In an interview with the Des Moines Tribune newspaper in 1977, Fitzmorris described Aldi as “the first new merchandising idea since the supermarket was introduced in 1932,” but added, “it’s too early to say whether it will succeed or not.”

The original Iowa City store in fact did not succeed: It closed at the end of 1977, in part, reports said, because the building was too big to be efficient. Aldi returned to another site near the same intersection in 1985 and currently operates out of a replacement that opened about a mile away in 2014.

More than 40 years and nearly 2,000 stores later, it’s safe to say Aldi has succeeded, and quite presciently: Lean, private label focused, small stores are in style and the value shopping trend has never been stronger.