Southeastern Grocers, which positioned its five-year turnaround and COVID-aided sales momentum into an opportunity for some of its private holders to cash out in a public offering of stock, postponed those plans on the eve of its expected return to the New York Stock Exchange. The Jacksonville, Fla.-based parent of the Winn-Dixie, Fresco Y Mas and Harveys chains said it would “continue to evaluate the timing for the proposed offering as market conditions develop.”

To the extent “timing” was the issue, Southeastern picked the wrong week, but maybe even the wrong year too. The offering happened to come amid wild market volatility and controversy highlighted by the video-game retailer GameStop, whose stock reportedly soared with help of a pack of Reddit day traders evidently trying to stick it to hedge funds that made a practice of “shorting” its shares. Food retail industry stocks, in the meantime, were also doing their share of unusual bouncing about, as illustrated in the chart showing stock prices for the month of January. Giant leaps early last week that helped several companies reach 52-week highs were swiftly erased in a day, a signal of similar “short squeezes,” sources said. Take a closer look at the below chart, thanks to data from Sentieo, here. 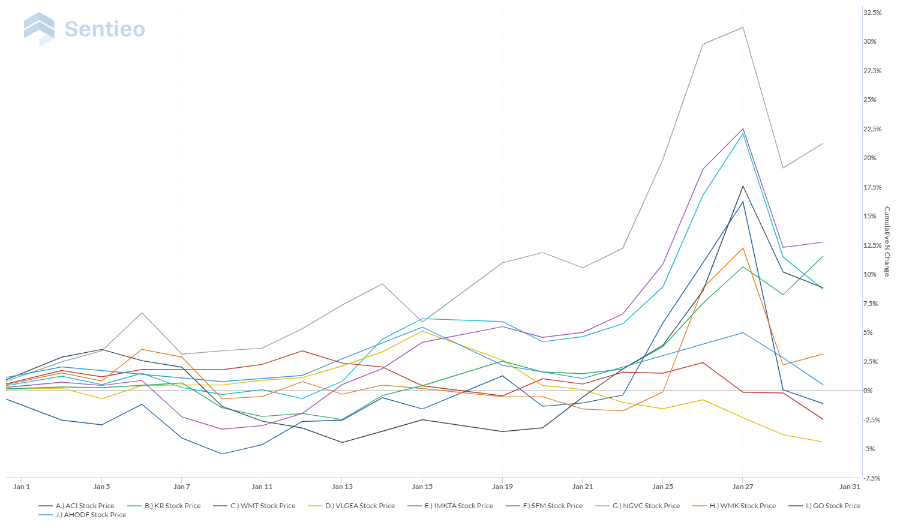 But while we learned last week (once again) not put to anything past what a bunch of angry people online can do, we’re also reminded that timing isn’t everything. One financial pro I asked about Southeastern’s failure to take off didn’t mention GameStop at all, but rather the $14-$16 per-share range the sellers were seeking.

That supports growing sentiment among analysts that supermarkets for all their current momentum are hurtling headlong into tricky times: impossible-to-beat comps (more on that below), plus an damaged economy that’s eventually going to play out in yet another flight to value among shoppers leading to price wars and pressure on their cost structures.

So where does Southeastern go from here? Industry consultant Burt P. Flickinger III told me he believes the company could take another shot at the markets in a month or two noting the last industry IPO, Albertsons Cos., also encountered poor timing when its offer happened to coincide with the onset of the pandemic before finally getting off the ground in June. But that price point may need to change.

In the meantime, the narrative laid out by Southeastern in its prospectus—we turned big losses into profits and negative comps into positive ones by cleaning up stores and getting better at fresh foods, private label, personalized marketing and data, while dumping our laggards to concentrate on faster growing markets—may eventually capture the attention of strategic rivals as much of that could describe their game plans too. But they too may view Winn-Dixie as something of a fixer-upper still, and may want to see how Winn-Dixie survives the coming year.

Ahold Delhaize (Kash n Karry/Sweetbay), Kroger (Lucky’s Market) and Albertsons have all abandoned the Sunshine State in recent years. Flickinger notes that both Kroger and Ahold Delhaize have unofficial policies to only acquire “thoroughbreds” at least when charting new markets, and it could be “three to five years” before they’d strongly consider Southeastern. Kroger, only months away from a virtual reoccupation of Florida via its Ocado launch there, has got to have it mind.

There’s no getting around the certainty that year-over-year industry comps will suffer this year but Albertsons CEO Vivek Sankaran at least has a plan to introduce some perspective. The company—which has one easy quarter left to beat (last year’s 1.8% Q4) before looking at a COVID-sparked 21.4% mountain to climb in Q1—is going to approach it as a supermarket merchant might.

“We love positive comps, right? [But] looking at next year … it won’t be positive,” Sankaran said in exchange with an analyst while reviewing the company’s third-quarter financials last month. “So we’re going to think about a two-year stack, and we’ll talk to you about a two-year stack. That’s how we’re thinking about modeling next year’s business.”

By presenting two years of comps together—in a hypothetical case, subtracting the negative number likely to be encountered this year from last year’s big gains and asking investors to consider that sum as a more accurate gauge of progress while accounting for the once-in-a-lifetime COVID sales windfall—Sankaran said he hopes to send a message that the business is “healthier than what would have been pre-pandemic levels.”

Expect to hear a lot about stacks this year: the BOGOs of retail health indicators.

Craig Jelinek may not be Colonel Sanders, but he’s turning out to be a pretty good chicken salesman. The CEO of Costco Wholesale oversaw the sale of 101 million rotisserie chickens globally during Costco’s fiscal year, one among a bunch of head-spinning figures from the high-volume club shared by Jelinek in an address to shareholders last month and relayed by my colleague Jennifer Strailey.

Several chief financial officers are settling into new digs, or more accurately these days, didn’t necessarily leave their home offices but are drawing paychecks from a new source.

Randy Greben, whose prior experience included a stint as CFO of Tesco’s memorable but short-lived Fresh & Easy concept, took over this month at another arrow-collecting food retail pioneer, Blue Apron. Michael Lockard, who since 2012 has been CFO of privately held Food City parent K-VA-T Foods, in March is moving to the same role at publicly traded counterpart Weis Markets.

And in what looks to be further indication that Instacart will try a public spinoff, Goldman Sachs veteran Nick Giovanni took over as CFO last week. Gionvanni has advised clients on hundreds of deals, including some of the largest financial public offerings of the last two decades for companies such as Airbnb, DoorDash, Square, Twitter, Snap, Dropbox, Yelp, Zynga, eBay, Meituan and Baidu, as well as direct listings for Spotify and Slack. For Instacart, reportedly looking at a $30 billion valuation, the timing and market appetite could be just right.

Reports this week from Amazon (Feb. 2) and Natural Grocers (Feb. 4) kick off a new earnings season. Before the short month is out we expect to hear results from Blue Apron, Ocado, Ahold Delhaize, Walmart and Sprouts.