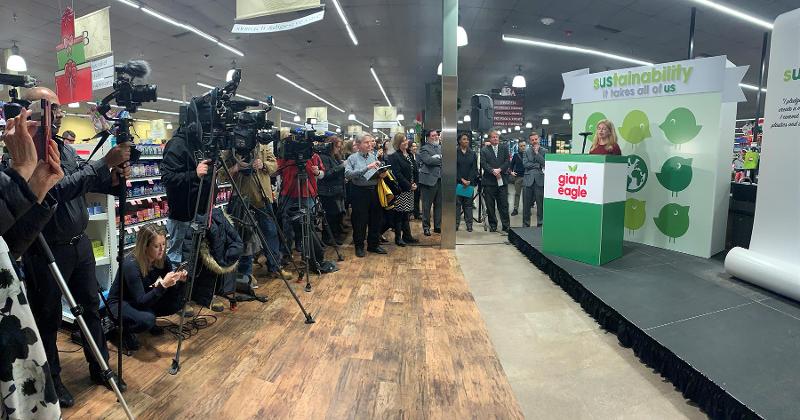 Giant Eagle President and CEO Laura Karet detailed the retailer’s move to eliminate single-use plastic bags from all of its stores within five years at a press conference at its Waterworks Market District store, which will serve as the pilot store for the initiative. Photograph courtesy of Giant Eagle

The Pittsburgh-based retailer said it will reveal specific goals related to each of the focus areas throughout the coming months, beginning with phasing out single-use plastic bags, as well as single-use plastic straws, fresh food containers, bottled beverages and more.

During a press conference on Dec. 17, Giant Eagle officials detailed the company’s move to eliminate single-use plastic bags from all of its stores within five years, preceded with the launch of separate plastic bag pilot programs beginning in January in three of its geographic markets, including Pittsburgh, Cuyahoga County in Ohio and Bexley, Ohio, a suburb of Columbus.

While Giant Eagle’s 2025 commitment is chainwide, company spokeswoman Jannah Jablonowski told WGB the 470-store retailer “will be executing against it differently in each of our operating markets. In Pittsburgh and Bexley, Ohio, this will come to life in single-store locations,” with plans “to paint with a broader brush in northeast Ohio, specifically Cuyahoga County.”

Giant Eagle is launching its Pittsburgh pilot in its Waterworks Market District store located nearby its corporate headquarters in Ohara Township, Pa., in partnership with Allegheny County, the city of Pittsburgh and Sustainable Pittsburgh. The store will remove single-use plastic bags at its registers for the six-month test that will launch on Jan. 15. In place of single-use plastic bags, the store will encourage the use of reusable bags with a limited-time “one perk per reusable bag used” promotion. The perk will be available for a limited time at all Giant Eagle supermarkets chainwide beginning on Dec. 17. All Giant Eagle supermarkets will also have reusable bags available for purchase at 99 cents each.

To reinforce the use of reusable bags, Giant Eagle’s Waterworks Market District store will charge a 10-cent fee per paper bag used, ensuring that paper bags continue to be available for interested customers. Customers paying with forms of government-funded food assistance (SNAP, WIC, etc.) will be exempt from the paper bag fee. 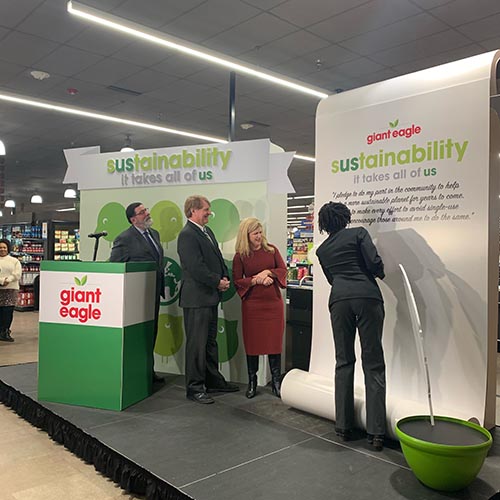 “When my great-grandfather and the four other founders started Giant Eagle nearly 90 years ago, they wanted to improve life for people in their communities,” Giant Eagle President and CEO Laura Shapira Karet said in a statement. “Protecting our planet for future generations is a critical way we uphold this commitment today.”

The collaborative effort was encouraged by Pennsylvania legislation passed earlier this year that put in place a one-year moratorium on plastic bag bans so the environmental and economic impacts of such ordinances could be vetted.

“Consumers have power, and this move invites every shopper to have a positive impact,” said Joylette Portlock, executive director of Sustainable Pittsburgh. “Giant Eagle is demonstrating leadership in identifying solutions for how to reduce plastic waste here in the Pittsburgh region, and is considering the right factors during this pilot. We also applaud and support the company’s larger sustainability commitment to our community.”

Allegheny County Executive Rich Fitzgerald also expressed gratitude “to Laura and her team at Giant Eagle for this commitment to eliminate single-use plastic by 2025. We thank the company for its leadership and are thrilled to see so many taking active roles in doing their part to reduce our ecological footprint.”

Giant Eagle said it is also committed to phasing out the use of its signature blue single-use plastic bags in all city of Pittsburgh stores in the coming months, which coincides with Pittsburgh’s rollout of free recycling bins to all households serviced by the city.

Pittsburgh Mayor Bill Peduto also commended Giant Eagle on its “bold pledge to eliminate single-use plastic by 2025—a major advancement toward tackling our challenges with litter and recycling quality in Pittsburgh.”