While independent contractors such as delivery drivers and personal shoppers have become familiar fixtures in retail stores in recent years, it’s becoming more likely today that stockers, merchandisers and other workers in the store or distribution center might also be there on a freelance basis.

Meijer, the Grand Rapids, Mich.-based superstore operator, is finding some of those tasks today can be best served through a flexible marketplace of gig workers. The 245-store retailer is working with a newly launched company called Hyer, which uses an app to summon, train and account for “taskers” who are given specific jobs on an on-demand basis in the style of Uber or Instacart. This arrangement is assuring stores remain fit for shoppers at key moments while providing a more cost-effective means of temporary labor than traditional agencies as well as productivity gains over the long term, says Chris Acquaviva, chief strategy officer of Rye, N.Y.-based Hyer.

“What we really are focused on is trying to provide the most efficient, cost-effective workforce in a truly on-demand manner for these large retailers and CPG customers who’ve used their old workforces to stock shelves and to do their own direct retail logistics,” Acquaviva tells WGB.

Hyer is among hundreds of companies now tapping into mobile and other technology advances with the promise of helping retailers and brands take a new look at how they hire and deploy labor. At the same time, companies are rethinking their approach to work itself, because these technologies can help guide training and consistency; reduce or remove inefficiencies associated with menial or time-consuming tasks; access talent marketplaces; and ultimately support workforces that are flatter, smaller and more versatile than workforces of a few years ago but also more engaged and better paid.

Walmart, for example, is in the early stages of testing its “Great Workforce” initiative, building on the gains it has made over recent years behind tech-enabled training and tools for workers. The test, which reportedly was underway in 500 stores early this year, offers higher pay for new workers but accompanies a move to broaden their responsibilities, reducing the variety of roles in a store in a manner not unlike hard discounters such as Aldi, whose efficiency-based model is gaining a lot of followers.

Labor productivity is a sensitive issue for retailers, who tend to shy away from quantifying results in detail and prefer to couch gains in context with improvements to the customer experience and service, and in better deployment of capital.

Mike Graham, SVP of supply chain and manufacturing for Meijer, put it this way: “Customer experience is always top of mind at Meijer, because as Fred Meijer once said, ‘Our customers don’t need us, we need them.’ There are many responsibilities at the store level that can be fulfilled quickly and easily by individuals looking for flexible work arrangements.” 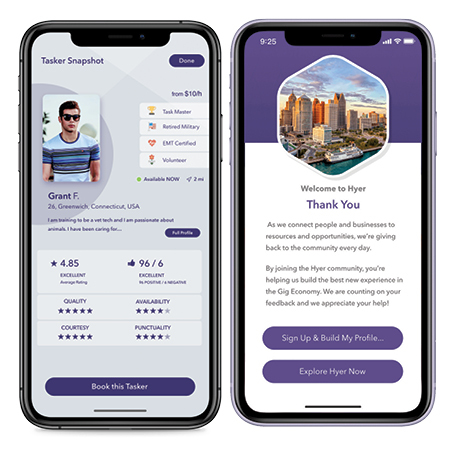 Hyer was founded last year by Dave Dempsey, a PepsiCo veteran who had long worked on transformation efforts at the CPG giant. “I think through that work, he realized at the retail level that there are a lot of pain points and certain level of inefficiency in workforces within the retail and CPG fields,” Acquaviva says. Hyer maintains it has an advantage over other on-demand labor apps behind a quick turnaround—stores can source a workforce in as little two hours—and abilities to identify preferred freelancers, offer them additional gigs as needed and expertise in retail and CPG “pain points.”

On-demand labor is a promising solution because of the “ebb and flow” nature of the supply chain and associated issues with worker turnover and hiring, Acquaviva says. “You’d spend a lot of time training a workforce and enhancing the workforce to have that workforce then turn over and having to go back in and do that again,” he says.

Not all hourly retail jobs will go this way.

“The reality of it is, I think there are probably certain skills within the store, like behind the meat counter and things like that, that may require a little bit more training around some of the equipment and just a deeper knowledge of certain aspects of the store,” Acquaviva says. But jobs that are going that route tend to be “a lot of stuff that keeps the consumer experience moving. The last thing that any retailers want is to have a consumer walk in and something be out of stock, or not take advantage of the proper products in terms of the right resets and the right flow within the store. I think we’re seeing a lot of focus on that. For us, that’s where the biggest opportunities lie,” he says.

A recent report released by Troy, Mich.-based Kelly Services shows that close to one-third of the global workforce is forgoing traditional employment for the flexibility and freedom offered by the gig economy. However, the gig economy only works when individuals and businesses can connect quickly and easily.

“Something like 70 million people in the United States are part of what would be called the gig economy at this point,” Acquaviva says. “I think the idea is, you have the millennial generation and Generation Z, which love the idea of being able to do something for four hours and then maybe go home for a couple of hours [and] do something else for four more hours.

“I think a lot of these taskers have multiple [gig job] apps on their phone, and they’re just looking for the best opportunity.”

Since it began working with Hyer, Meijer says it has been able to better manage the volatility of demand—having the right number of resources that match their needs. “Across the system, the user experience is fast and simplifies the overall resource management at store level, saving us time and increasing efficiency while simultaneously improving the customer experience,” says Todd Weer, SVP of stores for Meijer.

“Intelligent workforce solutions” is something of a thread stitching together any number of emerging practices in food retail, where trends such as gig jobs, a need to generate investment in new shopping modalities and low unemployment figures are pressuring payroll. Vendors at the recent National Retail Federation Big Show in New York each seemed to have a solution but, as one exhibitor confessed, “it’s a nut that’s been very hard to crack.”

Managing a non-gig workforce is also getting a hand from technology. At the Big Show, exhibitor WorkJam showed off what it referred to as a “Slack for wage jobs,” which can efficiently orchestrate functions such as scheduling, shift swapping, messaging and even training. The system is now in place at some Kroger Co. distribution centers (DCs) “because they felt their customer experience really starts in the DCs, because in grocery, it’s all about being in stock,” says Adam Hatch of Montreal-based WorkJam, which has U.S. offices in Cincinnati.

“If we’re selling out of a special product, or there’s a shortage in a store, what I’d have to do before was make a bunch of calls and beg, borrow and plead for a bunch of people to work. Now I can just broadcast shifts and I get them filled because people want the hours. That’s a multithreaded benefit,” Hatch says. “You save time for the manager, you’re adding a shift and helping to keep in-stock. There’s a retention factor here as well. We hear nightmare stories about turnover in the DC world. There’s so much labor demand, they’re walking to work at a site across the street for 20 cents more an hour. But people value flexibility, maybe more than they like an extra 20 cents an hour.”