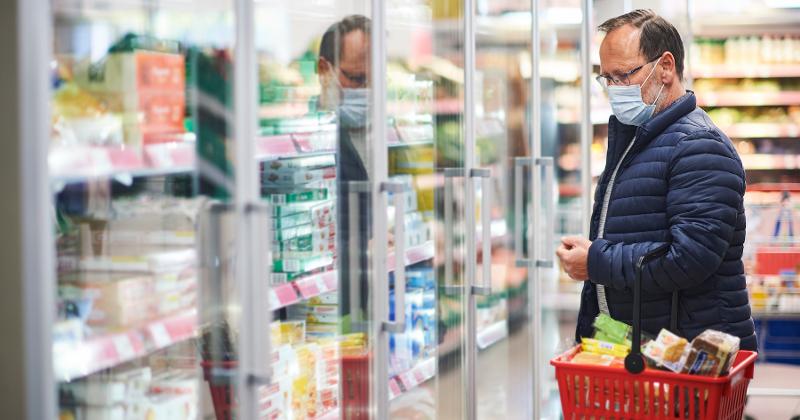 Grocery store retail sales edged up 0.1% month over month in December and were up 7.3% year over year. / Photo: Shutterstock

December retail and foodservice sales came in at $677.14 billion (seasonally adjusted), down 1.1% from $689.44 billion in November but up 6% from December 2021, the U.S. Census Bureau reported in advance estimates on Thursday. Retail trade sales for December—excluding motor vehicles and parts stores, gas and repair stations—fell 1.2% month over month to $588.81 billion yet climbed 5.1% year over year.

The retail sales performance for December continued decreases from November’s performance, when total retail sales dipped 0.6% month to month and were up 6.5% year over year, which marked a notable downturn from October. Retail trade sales in November declined 0.8% month over month to $599.05 billion but rose 5.4% year over year, compared with monthly and annual gains in October.

Grocery store retail sales for December inched up 0.1% month over month to $72.95 billion (seasonally adjusted), below the 0.8% sequential gain in November but up 7.3% from December 2021, less than the 8.6% year-over-year uptick in November. 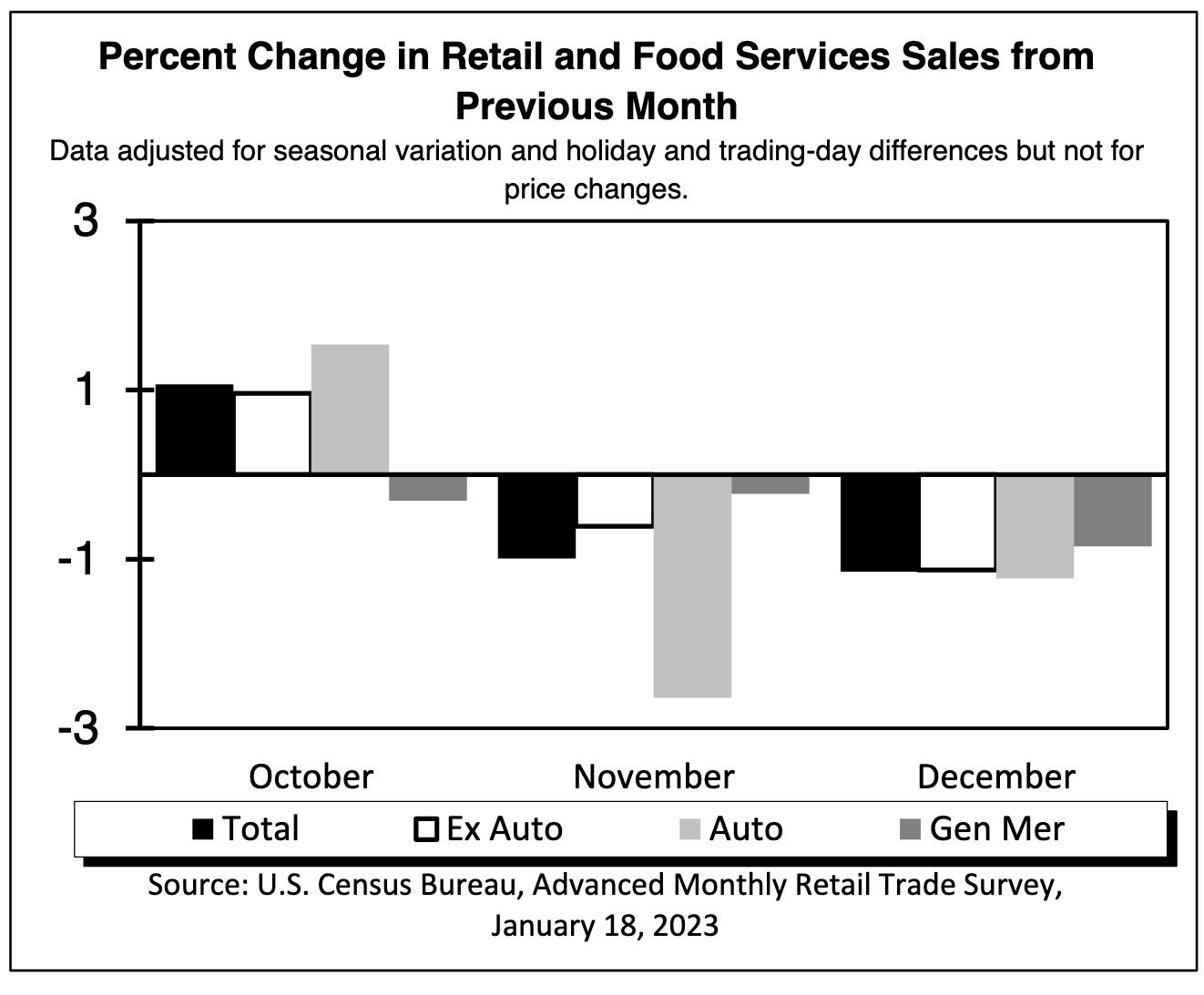 Sales at all food and beverage stores were flat in December on a sequential basis and grew 6.9% over 12 months to $81.32 billion, versus increases of 0.8% month over month and 8.1% year over year in November, the Census Bureau reported.

“The final retail sales report of 2022 was the weakest of the year, aligning with monthly declines across a broad range of categories captured by Morning Consult’s proprietary spending data. In real terms, retail sales declined year over year—a development that is especially disappointing given that last December was being impacted by the spread of the omicron variant,” Bruun said in an emailed statement. “Weaker spending on core goods affirms that growth in the broader consumer spending measure—personal consumption expenditures, released later this month—will need to be driven by services, though Morning Consult’s data suggests demand may be losing momentum for these purchases as well.” 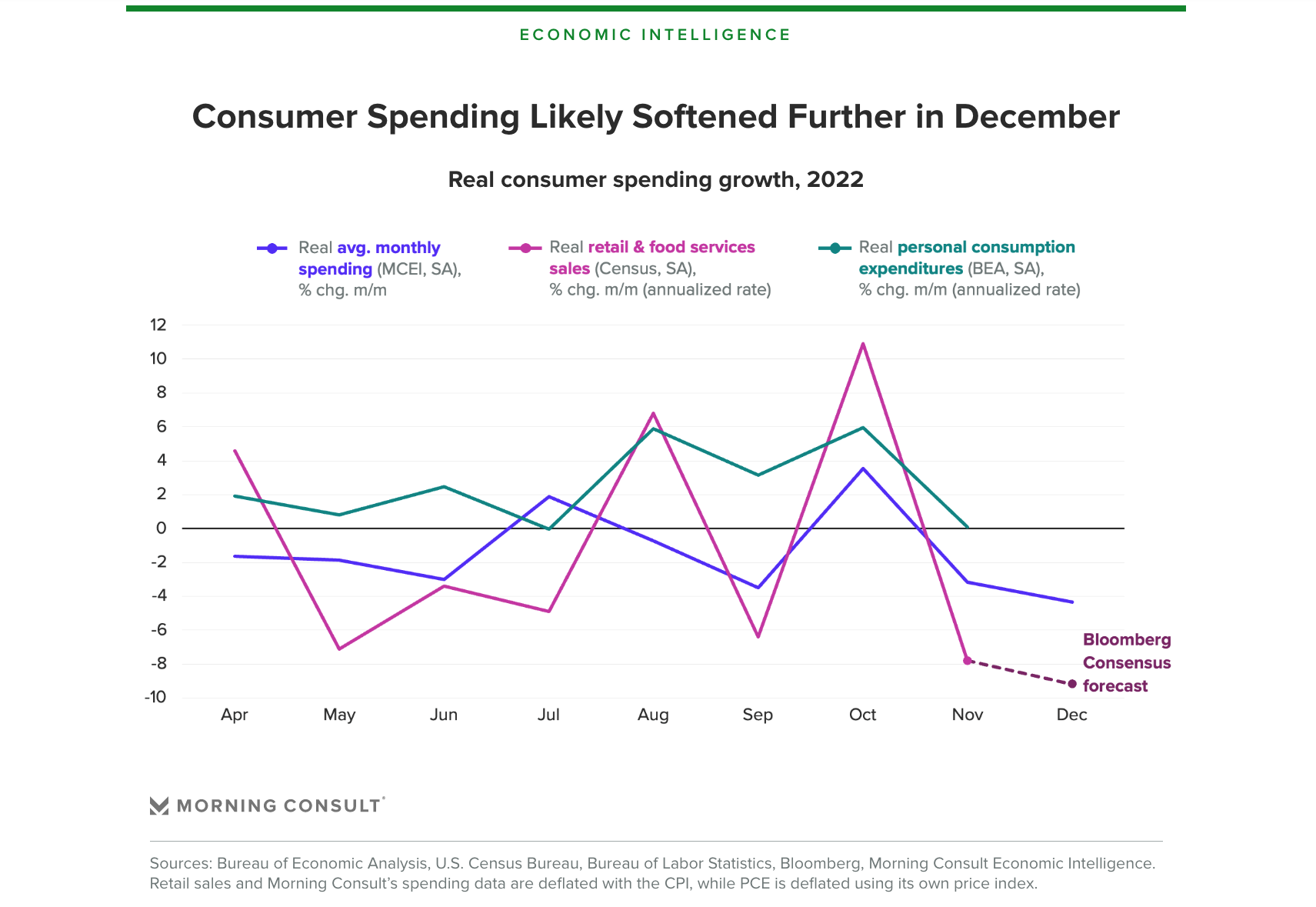 “There are bright spots in today's report, with non-store retailers growing 13.7% from December 2021,” commented Claire Tassin, retail and e-commerce analyst at Morning Consult. “While inflation in gas and groceries strained budgets, Americans continued to spend.”

Of the 11 retail trade store categories, eight had month-to-month sales decreases for December, with food and beverage stores (flat), sporting goods/hobby/musical instrument/book stores (+0.1%), and building material/garden equipment and supplies dealers (+0.3%) being the only exceptions, according to the Census Bureau.

“Although retail foot traffic rose by double digits in December for practically all categories, it wasn’t enough to counter the effects of inflation combined with deep discounting for the holidays. Inflation was up 6.5% from year-ago levels,” stated Naveen Jaggi, president of retail advisory services at commercial real estate firm Jones Lang LaSalle (JLL). “While this is lower than the peaks seen mid-2022, it was enough to dampen consumer confidence heading into holiday shopping. Furthermore, food prices continue to climb, meaning consumers still had to devote more of their dollars to necessities rather than discretionary goods.”