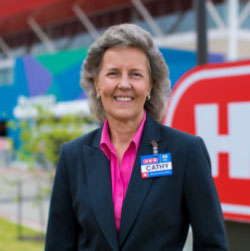 Harm entered the role in early 2020, just weeks before the COVID-19 pandemic began. “Taking the reins during this tumultuous time, Harm used her deep industry knowledge and steady presence to navigate the crisis, leading 55 stores in Central Texas as they continued providing the world class customer service and community support Texans expect from H-E-B,” the company said.

“No one started this year anticipating being a front-line worker in a global pandemic,” said Harm, in a statement. “But when a crisis hits, there is no organization better equipped than H-E-B to manage and lead through it. It has been my privilege to work alongside 20,000 talented H-E-B partners in Central Texas as we creatively served our customers through these uncertain times.”

Harm began her 35-year H-E-B career in Central Texas store operations shortly after graduating college. She moved to San Antonio to take on multiple corporate roles, including category manager for general merchandise followed by importing buyer where she sourced, developed and procured products from Thailand, Taiwan and Hong Kong.

Moving into the director of Own Brand, she led development efforts and teams for some of H-E-B’s most iconic brands, including H-E-B Creamy Creations Ice Cream and H-E-B Cafe Ole Coffee. She then advanced to director of merchandising and marketing in the San Antonio region and then took on the role of director of retail operations which subsequently led to her new position.

In addition to her resume as a leader for H-E-B, Harm also takes an active role in her community. She is a diversity advocate award recipient who embraces H-E-B’s “Helping Here” and “Spirit of Giving” philosophies. Through her work with H-E-B’s Women in Leadership programs she aims to inspire, empower and develop female leaders to significant leadership roles within the company and community.

Her efforts, however, are not limited to women, as she is known for talent development throughout the company. Harm serves on the board of the United Way for Greater Austin. In this capacity, she successfully led H-E-B’s first virtual Partner fundraising campaign this fall, which raised more than $1.4 million in pledges from Central Texas Partners.

Harm has an MBA from Our Lady of the Lake University and a Bachelor of Arts degree in business management from Texas Lutheran University. She has been married to her wife, Tracey Blackwell, for 30 years and they have two sons. She has a passion for cycling and enjoys supporting fundraising rides and advocacy campaigns for nonprofit organizations such as the Alzheimer’s Association and the Multiple Sclerosis Society.