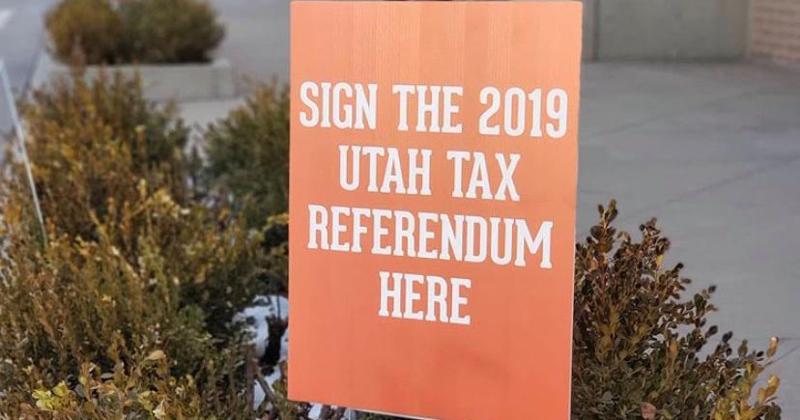 Harmons Grocery has taken a leading role in a citizen campaign aimed at overturning recent changes to the state’s tax laws, which would increase the rate on groceries from 1.75% to 4.85%, by opening its 19 statewide stores for people to sign the Utah 2019 Tax Referendum.

The West Valley City, Utah-based grocer invited customers through Jan. 21 to sign the 2019 Tax Referendum in opposition to the looming 177% food tax increase. Volunteers for the Utah 2019 Tax Referendum were on hand to staff tables in the stores, along with Harmons associates, who were available at the in-store business centers to assist with signature witnessing. Utah’s referendum law requires that supporters collect more than 115,000 signatures by Jan. 21, including 8% of registered voters in at least 15 of Utah’s 29 counties, in order to qualify for the ballot.

Utah lawmakers convened in a special session in December to approve the tax changes as part of a reform package to cut taxes by $160 million and expand the services-based businesses that will be subject to sales taxes while increasing the per-child dependent exemption and creating new tax credits for low-income residents. In addition to higher grocery taxes, the package also increases fuel taxes by 5% and adds new taxes on previously untaxed services, along with slashing $680 million from education funding.

Utah Gov. Gary Herbert issued a statement saying it was “disappointed in Harmon’s actions. … As a corporate citizen in the state, they have a right to engage in the political process, but they also have the responsibility to do so in a way that elevates the public’s discourse and is based on facts and not emotion.” Herbert’s statement further suggested that Harmons’ opposition, as well as others who are opposed to the tax reform package such as Associated Food Stores, was based on lack of understanding.

Harmons Chairman of the Customer Bob Harmon said the company strongly believes that Utahans should vote on the tax changes before they take effect and called the massive food tax hike “simply unreasonable.”

In an interview with WGB, Harmon said while it’s not often that the regional retailer weighs in on heavily political or partisan subjects, “this case is different. Every citizen of the state will be directly impacted, and that’s why we felt very strongly that this is something that we needed to” take a stand. “In doing so,” he continued, “we’re very proud to be a part of this effort and are very passionate about the fact that it will mean a huge change to economically challenged people that are struggling but who are making it through today.”

Harmon said he was “impressed by the overwhelming support of the community” to step in and make their voices heard on a grassroots level, and more so because of the short time frame needed in order to obtain sufficient signatures for the referendum, which he said, “is simply to stop the progression of this legislation and to allow the public to weigh in and hear what this truly means to them, and then take it to vote in November.”

Contrary to the governor’s characterization, Harmon said, “We’re really encouraging people to understand what it means for them. This isn’t an up or down vote that’s for or against it at this point; this is simply a way for customers’ voices to be heard by signing [the referendum petition] so that you can hear and understand for your own well-being what this means, and then vote for it or against it when it gets to that point in November.”

Harmon said he’s been “quite overwhelmed by—but not shocked—at the attention” the issue has received in the local media. He said he also visited the state capitol over the weekend as a part of the coalition to speak about opposition to the pending grocery tax increase and advocate for the referendum, which he said was only possible to pursue since the tax package didn’t pass by a majority vote.

Harmon said the in-store referendum stations have “made a big difference” in getting the word out. “While I’ve been in the stores during the last week, thanking the volunteers, I’ve run into hundreds of, if not thousands, of customers” who were unaware of the issue, which had “already been signed and set to go into effect. That, in itself, is the point: That people have to understand what they’re going to be paying for through taxation, and why it’s happening.”

Harmons has had the support of other local grocery retailers, “who have also come on board, opened up their doors and allowed the referendum to be signed in their stores as well. And so I applaud them all.”

“Food is essential and should be affordable,” Harmon added. “Increasing the tax on food hurts everyone, but especially those in our community who are already struggling. As a company, we do not believe groceries should be taxed. We feel strongly that Utahans should have an opportunity to vote on the issue before the tax goes into effect.”