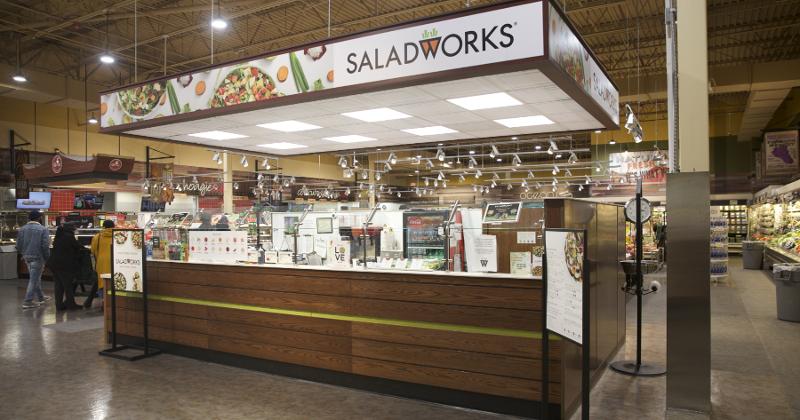 Will the labor issues for grocery, restaurants and foodservice that plagued 2021, specifically the challenge to hire and retain talent, linger in 2022?

WGB recently sat down with Kelly Roddy, CEO of WOWorks, parent company of the fast-casual outlets Saladworks, Frutta Bowls, Garbanzo Mediterranean Fresh and The Simple Greek, to discuss the company’s ambitious expansion plans with both in-store (grocery) and standalone locations during a labor shortage.

Last September, Saladworks parent company WOWorks signed an agreement with Ghost Kitchen Brands for 60 U.S. locations. And while labor shortages have impacted the speed with which these locations roll out, the company says it could lead to 1,000 Saladworks Walmart locations by the end of 2022. This year, WOWorks has already confirmed 28 Walmart Saladworks and/or Frutta Bowls locations are underway.

The St. Petersburg, Fla.-based WOWorks is continuing its strong partnership with The Giant Co. with plans to open four new locations that include two Saladworks and Frutta Bowls co-branded restaurant store-within-a-store sites.

Most recently, WOWorks opened the doors to its first standalone Frutta Bowls in a Giant store in Doylestown, Pa.

“There have been labor issues in every one of these stores,” says Roddy. “It’s definitely a challenge. But once we got to Christmas, we started to get staffing. Prior to that it was terrible—it was 90 days of constantly hiring. Now it feels like the first time in three or four months that staffing is more manageable. Maybe we need one or two people here or there, but two months ago, we had difficulty even opening a new restaurant because of staffing.”

But while labor shortages, supply chain issues and COVID outbreaks have hindered a faster-paced rollout of WOWorks concepts in grocery stores and standalone locations, Roddy sees the company poised for tremendous growth.

“Saladworks and Frutta Bowls work really well in grocery stores,” notes Roddy, who says consumers are looking for freshly prepared, clean food more than ever before—a good fit for WOWorks concepts, where everything is prepared from scratch, he adds “With grocery, we’ve got the business model down to where we know what it takes to be successful.”

Even the footprint of an in-store Saladworks, Frutta Bowls or co-branded restaurant is sized to maximize efficiency and profitability, says Roddy.

A recently opened co-branded restaurant inside Giant “showcases how we can open our two great healthy-halo brands together needing only 200 square feet—a perfectly sized restaurant for grocery stores,” Roddy said in a statement. “This grocery-store model is gaining traction because they are quicker to build out and open, have attractive back-end efficiencies and give customers more menu options covering all dayparts to help increase store foot-traffic.”

And while Garbanzo, WOWorks’ Mediterranean concept, is “growing like crazy” on college and university campuses, at airports and in cities across the country, Roddy sees the brand as an untapped opportunity for grocers, particularly those that are willing to embrace the cooking stations that are needed to bake freshly made pita bread, fry falafel and grill meats—core dishes on the Garbanzo menu.

“Garbanzo in a grocery store is a no-brainer,” he asserts. “The restaurant sells items that complement what is being sold in a grocery store. We want to be a true partner to grocery with Garbanzo, and we see opportunity for growth with the brand.”

Standalone and ghost-kitchen-operated Garbanzo locations are also “a big initiative” for WOWorks, continues Roddy, who points to three new Garbanzo ghost kitchens expected to open in the next 30 to 60 days in Denver, Colo. The brand is actively partnering with third-party order and delivery companies including Uber Eats and DoorDash in cities like downtown Denver, where WOWorks doesn’t have a physical location.