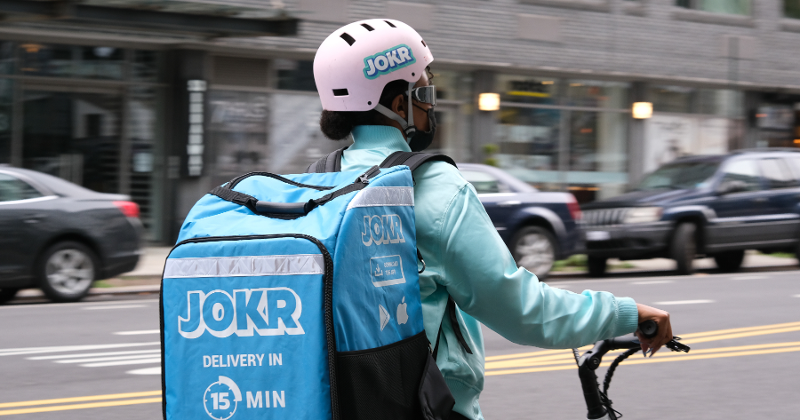 Funny how things change in a year.

Remember last June? Remember the chatter about a "hot vax summer," before the delta variant shut down that party? I know, almost hard to believe that was only a year ago.

Also happening in the sultry days of summer 2021: Money was pouring into ultrafast grocery delivery startups, with a growing roster of players vowing to change the grocery game by getting customers anything from pasta to paper towels (from a limited assortment of SKUs) in 15 minutes or less. By Memorial Day last year, Berlin-based Gorillas had raised more than $330 million across two funding rounds and was going head to head (or pedal to pedal) on the streets of Brooklyn with Fridge No More, which had wrapped a $15.4 million Series A investment round in March.

In June, Istanbul-based Getir said it had raked in $550 million in a Series D funding round, putting its valuation north of $7.5 billion—and the company didn't even make its U.S. debut until November in Chicago.

Later in the summer, Buyk, whose founders got their start in so-called instant delivery in Russia, hit the streets in Manhattan, having raised a reported $46 million in seed capital.

And then, among others, there was Jokr. In an interview with WGB last summer, Jokr co-founder Zachary Dennett, a former Walmart VP by way of Jet.com, described his company's raison d'etre this way: "The idea is, we are removing the need for planning to change the paradigm of shopping."

No longer did consumers need to plan one big weekly shopping trip; now they could get what they need exactly when they needed it, whether it was a necessary ingredient for dinner, a replenishment of chips for a party or a pack of baby wipes. They could get necessary items throughout the week without having to set foot in a grocery store.

But was that really what they wanted all along?

This week, Jokr became the latest casualty in a so-far brutal 2022 for "ghost grocers." Jokr's valuation had reached $1.2 billion in December, but on June 15, Bloomberg reported that the company had told employees it would end delivery operations in New York and Boston to focus on its Latin American business.

In backing out of the U.S. grocery market, Jokr joined Buyk, whose ride ended in March, not long after Russia's invasion of Ukraine. In a news release, Buyk cited "subsequent restrictions in funding" following the invasion as a reason for its decision to seek Chapter 11 bankruptcy protection. Fridge No More, too, shuttered in March after failing to secure necessary additional funding.

And what of the biggest (newer) players? Gorillas and Getir both announced layoffs in May, with Getir saying it was planning to lay off 14% of its global workforce and Gorillas saying it was letting go 300 people, according to CNBC.

The reasons the wheels have come off ultrafast grocery delivery—at least for now—are varied. Inflation and persistent economic unease play a major role, to be sure, with investors getting skittish about ventures that have struggled to demonstrate a path to profitability and consumers looking to rein in their spending a bit and avoid unnecessary fees where they can.

A recent Stor.ai survey of about 1,000 U.S. consumers found a majority saying they wouldn't pay premium fees for ultrafast grocery delivery, with less than 2% saying they'd be very likely to shell out extra cash for extra-speedy service. And research by Barrington, Ill.-based Brick Meets Click in May found continued share gains for pickup as an online grocery fulfillment method last month, with pickup capturing 45% of online grocery sales in the month vs. 36% for delivery.

"Customers appreciate the convenience of ordering online, but they are also becoming more cost-conscious," said Sylvain Perrier, president and CEO of Toronto-based Mercatus, which sponsors Brick Meets Click's monthly research. When grocery prices are 11.9% higher than they were last May, who can blame them?

But also, beyond inflation and lingering supply-chain snarls and rising interest rates and geopolitical uncertainty, there's this: It turns out that a lot of consumers still like going to the grocery store.

Nearly 4 in 10 Americans (39%) said they like or love the experience of grocery shopping, FMI–The Food Industry Association said in its May 2022 U.S. Grocery Shopper Trends report, prepared in partnership with The Hartman Group.

"Food shopping may be a household 'responsibility,' but, like cooking, it shares aspects of leisure and enjoyment for many Americans engaged with food," the report's authors noted.

Steve Markenson, director of research and insights for FMI, said the COVID-19 pandemic "has not diminished the appeal of grocery shopping, particularly for younger shoppers," and that shoppers' satisfaction with their primary store remains high.

Consumers in particular like to pick out their own fresh-perimeter items—to hand-select their apples, onions and boneless skinless chicken breasts. (A wider variety of pack sizes in fresh items, potentially not offered in a microgrocer's assortment, can also help them control their spend per trip or per serving.) And for those high-frequency, center-store items they don't want to run out of? Subscriptions may be shoppers' way forward.

"Subscriptions I believe in," said Frans Muller, CEO of Ahold Delhaize, in a conversation with WGB last month.

With subscriptions, he said, "We can plan, we can forecast, we can look at your family size and your basket and know that you have two kids who are still in the diaper age, so we can send [items] automatically to you, or you can pick it up, or we can send an offer to you in the right moment." And getting out in front of customer demand to simplify the weekly grocery shop is where real opportunity lies, he suggested.

"We talk about next-day, same-day, two hours, half an hour, flash. ...We are not into the flash business. It might develop into a customer demand, sustainably ... but we at the moment say, 'It’s so extremely dilutive; it's so loss-leading.' " Ahold Delhaize, he said, sees "opportunities for an hour, two hours, which we already have," but beyond that—there's no rush, so to speak.

"We know enough to know that we are supercreative as human beings, but 80% of your grocery shopping is routine," he said.