Food retailers are looking to fill thousands of jobs as demand ramps up for their services during the nationwide coronavirus pandemic, with many reaching out to workers displaced from counterparts in the hard-hit restaurant and hospitality industries.

Retailers, in the meantime, are preparing for the possibility that absenteeism increases as the virus spreads.

Amazon this week said it was looking to fill 100,000 new part-time and full-time positions in its fulfillment centers and delivery teams to help the massive e-tailer deliver on goods and services. It also said it would reward workers staying with the company with a $2-per-hour temporary raise through the end of April.

That $350 million investment to meet the temporary raises includes workers at all Whole Foods markets stores. “As a grocer, we believe serving customers and the community during this time is essential,” the Austin, Texas-based company said in a statement.

The changes come as Whole Foods makes a number of changes to stores, including closing all hot bars, salad bars, soup bars, self-serve pizza stations and self-serve offerings such as olive and antipasti, acai machines and poke bowls. Whole Foods is also transitioning seated restaurants and taprooms to takeout-only. Changes are anticipated to be complete by March 18.

Among the jobs Whole Foods is looking to fill include outsourced bicycle delivery people in New York.

“We know many people have been economically impacted as jobs in areas like hospitality, restaurants and travel are lost or furloughed as part of this crisis,” Amazon said in a blog post this week. “We want those people to know we welcome them on our teams until things return to normal and their past employer is able to bring them back.”

The Kroger Co., Cincinnati, put word out over the weekend that it had immediate positions available across its retail stores, manufacturing plants and distribution centers. Candidates could be placed for employment within several days of applying. 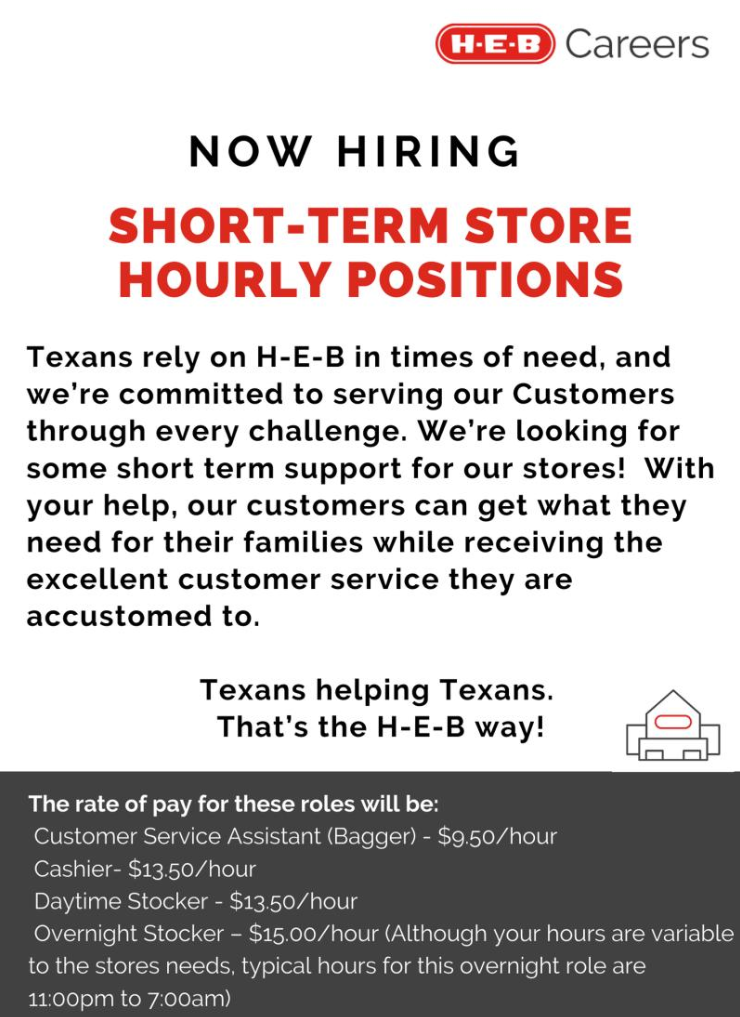 Lakewood, Colo.-based Natural Grocers has announced companywide hiring activity for temporary stocking and cleaning positions at all 157 stores across 20 states.

These new positions—which, according to public job listings, would be one per store—would work alongside Natural Grocers’ “good4u Crew” in keeping shelves stocked with household essentials, supplements and healthy foods, and regularly cleaning the most frequently touched surfaces in the stores, including checkout lanes, payment terminals, conveyor belts and cleaning shelves when restocking, the retailer said.

The Isely family, founders and majority owners of the company, said it takes pride in having been rated as one of the nation’s cleanest stores. “We are diligently focusing on these standards even more so until the coronavirus passes,” the family said in a statement. “On top of our daily cleaning procedures, we’re adding new processes to make our routines even more rigorous. This means more time will be spent cleaning our stores, including cleaning commonly used areas more often, including checkout lanes, credit card terminals, conveyor belts and cleaning shelves when restocking.”

Other companies spotted advertising new positions in recent days include H-E-B, Aldi, The Giant Co., and Albertsons Cos. and its banners.