At the risk of spilling one of my most closely guarded secrets, the best way to drive from metro Washington, D.C., to New York City is to skip Interstate 95 in Maryland, and instead head east/northeast on Route 50 and then 301, and then pick up I-95 in northern Delaware. It’s not necessarily any more direct, fast or fuel-efficient, but unless you get caught in summer beach traffic or the bottleneck approaching the Chesapeake Bay Bridge, it’s typically a much more picturesque and considerably less stressful, lower-traffic-volume trip over the great blue bay and through bucolic Eastern Shore farmland. It also allows you to avoid the dull and often traffic-choked I-95 and all its ugly Baltimore-Washington ring-road exits, all at a cost of maybe 10 or 15 minutes. A stressful drive awaits on the New Jersey Turnpike, no matter which route you take to get that far.

The farms of Route 301 give way to suburban density once you reach Middletown, Del., where you’ll find two terrific roadside convenience stores – Royal Farms and Wawa – where you can fill your tank and your belly, depending on whether you prefer fried chicken or a hoagie, respectively. Either one far outclasses the quality and experience typical of a highway rest stop.

On that very same mile of road, crammed between the Royal Farms and the Wawa, in fact, you can also witness a compact display of food retail’s existential struggle. There’s an Amazon fulfillment center, which is next door to a Lidl, which is directly across the street from a Walmart Supercenter, which is next door to an Aldi. Middletown is one of those fast-growing, once-underdeveloped exurban crossroad towns where people who don’t mind tacking an extra 30 minutes onto their daily commutes can find big, new, affordable homes. Most of its retail is brand new as well, and a good match for that bargain mindset.

I made it inside only Lidl (and also Wawa) on my most recent drive-by. This was my first visit to a Lidl in about a year. This particular store opened last September.

My Saturday-afternoon drop-in was not unlike a recent visit to a nearby Aldi store, where ravages of the Saturday-morning crush and a versatile but thin staff were evident in shopped-down merchandise – at least in some parts of the store – and frequent P.A. announcements as to whether checkout lanes four and five were now open or closed, as cashiers were redeployed to the sales floor and back again as needed. 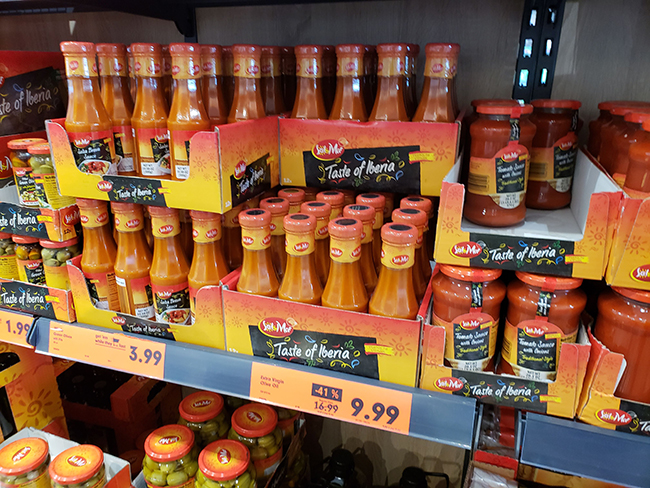 One meat case merchandising a weekly special, for example, had been completely emptied and not yet refilled. The parking lot was not full, but it was difficult not to park alongside another vehicle. And the prices, based on my New York City perspective, were ridiculous. Without a shopping list or a cooler in the car, I collected a bunch of nonperishable stuff in my cart I thought we might be able to use back home: a ball of twine, a barbecue brush, a jar of ibuprofen, a pineapple, chips and salsa, a snack and a cold bottle of water, a package of imported Italian extra-long spaghetti noodles, and two bags of single-origin ground coffee. My bill was less than $21.

Based on eavesdropped conversations, Middletown shoppers know they have it pretty good here. One shopper was explaining to her companion, evidently new to Lidl, that she typically shopped this store first, then filled out the rest of her needs across the street at Walmart, using the latter’s “Savings Catcher” app to win back any price differences on branded goods, then applying the discounts to the subsequent trip.

This culture of saving, where multiple players are in close proximity (there’s a Food Lion right around the corner from the big three in Middletown), matches what I’ve been hearing has been happening in other small towns around the country, where discounters are exerting local influence well in excess of what their size might suggest. One source told me last week that in Indiana, where Kroger’s Ruler Foods is the would-be Lidl to the existing Aldi and Walmart beasts, conventional milk was 95 cents a gallon, eggs were 46 cents a dozen and bananas were 27 cents a pound. “Aldi’s attitude there is, ‘You started this fight – we’re going to finish it,’” he said.

That Lidl is considering smaller units makes sense especially in Middletown, which due to state law lacks the beer and wine departments that take up so much space in its Virginia stores (and is a sorely lacking element, but one that sadly applies to all food retailers in the Blue Hen State). There were lots of places throughout the store where the same inventories appeared more than once, and much of the rear of the Middletown store consisted of sloppy mixes of in-and-out specials that weren’t quite “out” yet (a lot of apparel, but also kitchen gadgets, tools, school supplies and home goods), some deeply discounted to move. Specialty imported foods under Lidl’s Italiamo line were joined by previous week’s Asian, Greek and Spanish import specials. It was hard to tell which of them was supposed to have been the week’s feature.

That said, I hope for Lidl’s sake the new compact store model they’re evidently at work on doesn’t detract too much from its handsome appearance and bright, roomy interior feel. All else being equal (and it may not be), that – and the bakery – are the clearest advantage I can tell that Lidl has on its more established discount counterpart, from an experience standpoint, anyway. 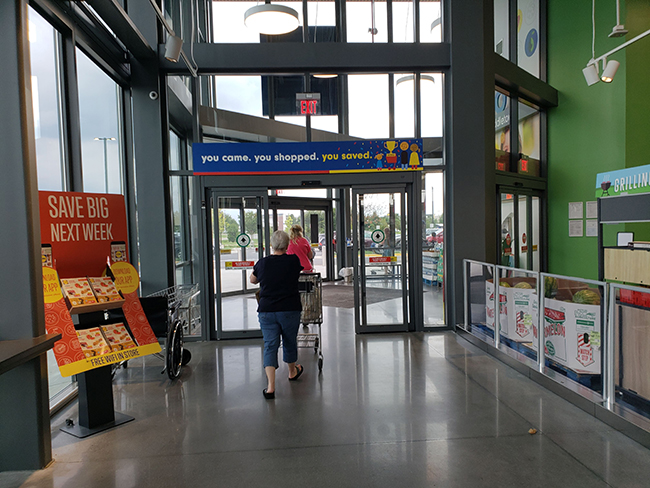 Which brings us back to secrets. For all the things they’re doing well in the shopping world, discounters – not to mention Amazon – remain remarkably opaque, which I suppose is all a part of the efficiency. Lidl’s spokesman politely declined a recent request for an interview with its new CEO, or to update continued expansion plans beyond what it's ready to share with shoppers.

In the meantime, Aldi just held a rare press event to show off its new store – which it’s been rolling out now for more than a year – and the new offerings inside (read Phil Lempert’s coverage for WGB here and here). But officials at that event would not share specifics on, for example, the number of SKUs in the store, how store sales have trended with the new format, or its daily transactions. By the way, does anyone remember Save-A-Lot? That discount chain has all but gone underground since its acquisition by private equity and installation of a new (Lidl-bred) management a year ago.

Want to see what’s really going on? Take the back roads.

What’s going down in your town? Let me know at jspringer@winsightmedia.com or @_JonSpringer on Twitter