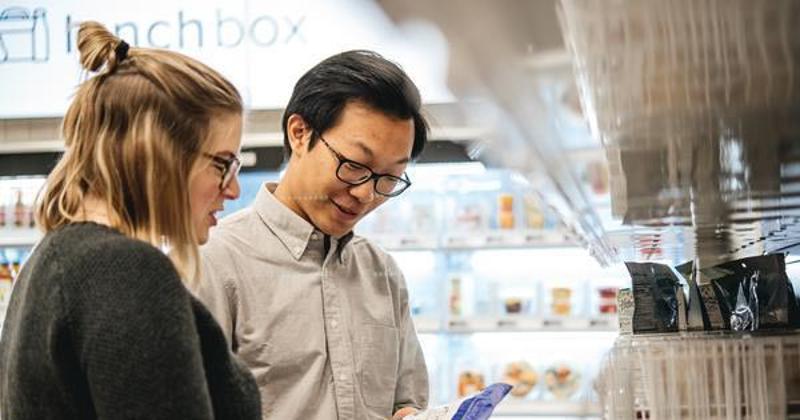 Ahold Delhaize’s Retail Business Services (RBS) thinks it has a winning proposition with its newly launched checkout-free store called Lunchbox. But don’t think of it necessarily as a concept destined for the company’s own retail stores.

Indeed, the real potential for Lunchbox—a small-store concept built in the style of the groundbreaking Amazon Go store, but at a fraction of the reported cost—is not just augmenting supermarkets but also taking food to places that supermarkets cannot reach, Paul Scorza, chief information officer of Retail Business Services, said in an interview with WGB. That prospect presents RBS with the opportunity to pursue selling or licensing the unit to outside businesses, potentially benefiting the parent company with a new revenue stream outside of the supermarket—a key tenet of Ahold Delhaize’s overall business strategy.

“We could put this in any forum: universities would be an example, or office parks,” said Scorza. “Now that we’ve seen how successful it could be, it’s ‘OK, where else can this go?’”

Lunchbox quietly opened over the summer inside the Quincy, Mass., offices shared by Retail Business Services and Stop & Shop. The 300-square-foot store sells food to go, such as sandwiches, salads and drinks, and has a similar approach of Amazon Go: Shoppers scan an app at a turnstyle entrance, sensors and cameras track their purchases by the items they remove from the shelf, and they are billed automatically as they depart.

If RBS has its way, “frictionlessness” could become something of a new hot seller for Ahold Delhaize. The company’s proprietary ScanIt Mobile checkout solution is also being offered outside the organization as are various shopper apps. The Kroger Co. has made a similar effort to market its developed technologies to other stores, such as its Edge digital shelving.

Scorza said Lunchbox was developed in about six weeks though RBS. Partners include UST Global, a digital transformation solutions company based in Aliso Viejo, Calif.; the processor company Intel; and an equipment provider in China. Ken Bolick, director of IT innovation for RBS and the leader of the unit’s innovation lab in Quincy, headed up the project, which included contribution from a team of code-writing students participating in a co-op program. This approach kept costs of the new store “under a half-million,” Scorza said.

That would be, at a minimum, about half what of Amazon has been said to have spent building its Go stores. (Published estimates for the cost of Amazon Go stores vary from $1 million per unit and up; Amazon has not commented publicly on its cost.) Scorza said it was his understanding an Amazon Go store he’d visited in Seattle had “about $4 million of technology in it.”

Similarly, Amazon is reportedly pursuing licensing its Go technologies to other retailers, with the prospect of 3,000 Amazon Go locations in three years looking less likely given there are fewer than 20 today.

“A $4 million solution is never going to be done: Who is ever going to spend $4 million for 500 square feet? Or 1,000 square feet? You wouldn’t. It’s ridiculous. It’s unaffordable,” Scorza said. “So that’s why, when we were able to do with this cheap of a pilot, we put it in place and within less than a week we had most of the building all signed up and using it.

“I'll give credit to Amazon” for developing Amazon Go, Scorza continued. “But I believe let somebody else be the bleeding edge, and I’ll be the fast follower.”

Much of the cost of the store was in refrigeration systems and shelf hardware, not in software or its underlying technology.

The Lunchbox in Quincy—the name, Scorza confessed, is a kind of working title that might not be appropriate for all potential rollouts of the frictionless technology—is stocked through a local Stop & Shop store. That chain is discussing possibilities of adapting Lunchbox for other stores in the chain. RBS in the meantime has plans to build a similar unit at its main offices in Salisbury, N.C.

“We believe that [Lunchbox] could easily be in our brands because we could service it out of our supermarkets, out of our brick-and-mortars. You could put it anywhere near a store. That's how we would do it,” Scorza said. “And the discussion as well is, could we sell it beyond that? Could we sell to somebody else right now? That’s an absolute potential.”