HelloFresh Group executives take no small measure of pride behind the notion they’ve developed a disruptive business that has tapped into consumer trends toward convenience, personalization and simplicity, providing meal kits that doubled in sales to about $2.5 billion in U.S. during its last fiscal year.

Hidden inside those boxes are other advantages for the business that U.S. consumers may or not realize: A highly efficiency approach to sourcing, selling and packaging, backed by a corporate commitment to sustainability that its officials say is good for the business and even better for people and the planet, the company said.

“I think a lot of our customers are very interested in sustainability, and are wondering what it means to them. But frequently, exciting flavors and appropriate costs for the budget are the first things that come to mind—and then we have to have a sustainable offering on the backend,” said Jeff Yorzyk, HelloFresh’s U.S. director of sustainability, in a recent interview with WGB.

Yorzyk, who is based in Boulder, Colo., joined HelloFresh upon the Berlin-based company’s acquisition of the Green Chef natural/organic direct-to-consumer food business nearly three years ago. He is leading the company in its pursuit of what he calls a “classical approach to sustainability,” that builds on a strategy he said creates significantly less food waste in its facilities and in the home than other food retail models, and is moving on what he calls “aggressive” plans to address greenhouse gas and carbon footprint impacts.

HelloFresh is expected to detail those efforts and share specific goals in an annual sustainability report to be published this week.

A lean supply chain representing a radically more sustainable way for people to feed themselves is at the heart of HelloFresh’s approach to reducing food waste, Yorzyk said.

HelloFresh buys food from the same pool producing items in grocery and other channels of trade, he noted, but the direct model provides precise demand, and proven recipes reduce waste in facilities and homes, cutting into sources of food waste that are more difficult for traditional channels of the food trade to address.

We’re designing recipes that have a high likelihood that people are going to like them and order based upon volumes that we expect to receive.

“We’re designing recipes that have a high likelihood that people are going to like them and order based upon volumes that we expect to receive—we can forecast small bumpers there—but we have a very high efficiency of usage,” he said. “And then as that material comes through our system, you turn over these recipes every week, so our quality team is able to go through our warehouse, find the food that we know we are not going to need in a week or two, and get it out through a charity donation scheme very quickly at a high level of quality—we have great food rescue partners in the areas that we do production.”

When HelloFresh’s food gets to the consumer, it’s already in quantities that meet the recipe, addressing what Yorzyk called “over-portioning” typical of packaged food and raw ingredients consumers obtain at retail. That reduces the amount of food that’s thrown away—and by a degree that consumers are probably underestimating.

A survey commissioned by the company in 2019 indicated that HelloFresh customers believe they waste about 24% less food using meal kits vs. making the same meal using ingredients sourced at stores. Yorzyk said the actual figure is likely much higher than that.

Experts estimate that about 40% of the food supply in the U.S. is wasted, with about 9% of that at harvest and transport; 10% in retail and distribution; and 20% in the home. “Those are staggering numbers,” Yorzyk said. 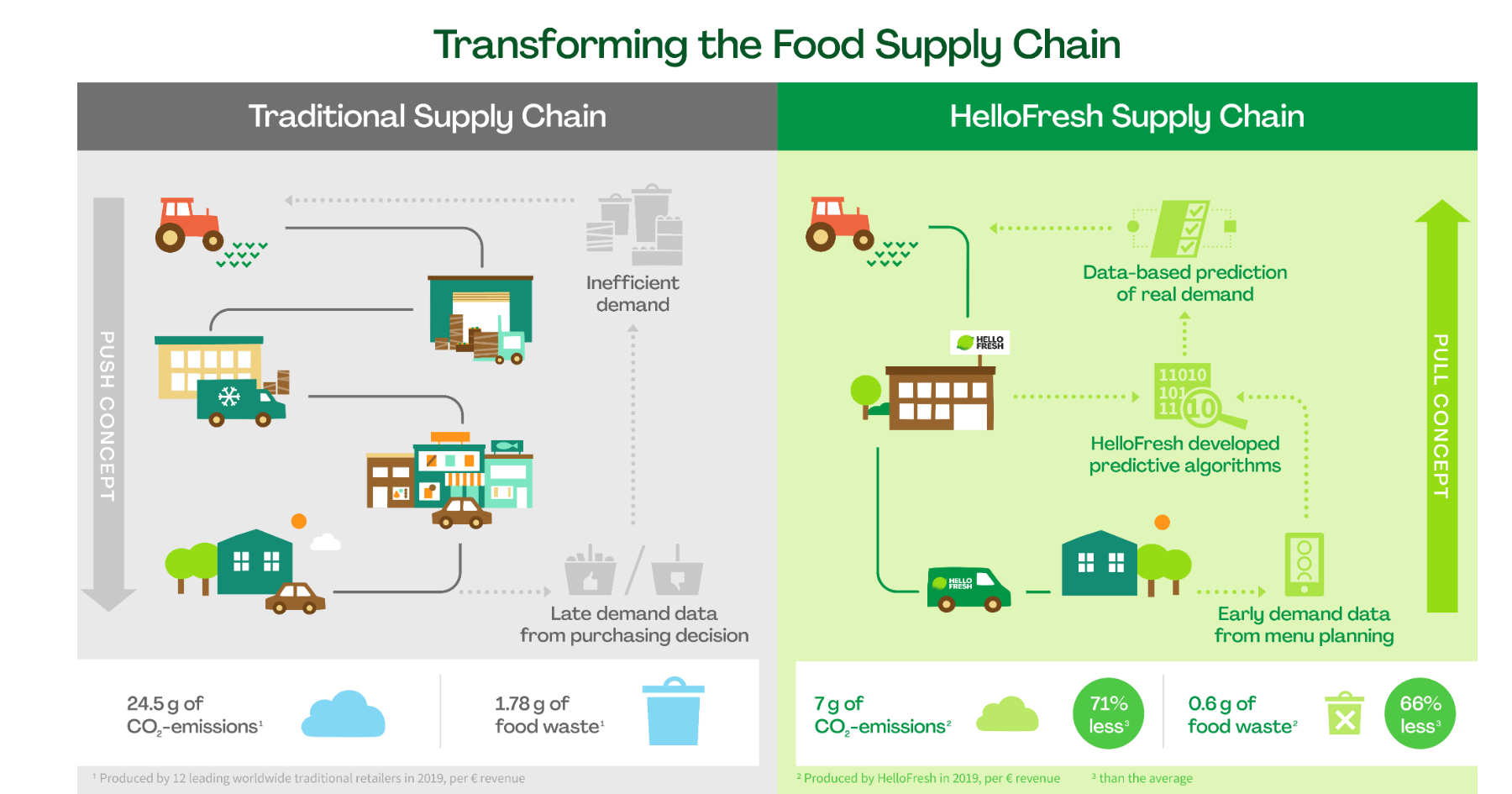 Yorzyk acknowledged a strong move toward sustainability in the food trade overall—for example, companies such as Kroger and Ahold Delhaize have made high-profile campaigns in recent years to engage suppliers and other stakeholders in pursuit of ambitious sustainability goals.

“It’s exciting to see how retailers are engaging and doing good work,” he said. “But frankly, there are fundamental flaws in their business models that our disruptive model solves for.”

Perhaps trickier for HelloFresh to address but also contemplated in its sustainability ambitions are packaging and emissions.

“One of the weaker points we hear about meal kits are concerns from customers about packaging,” Yorzyk said.

Although the model can bypass some “hidden packaging” in retail distribution—cases and cans for example—“in meal kits customers have to handle each item personally so they have a personal pang of guilt seeing plastic waste.”

The company has made strides in insulation for cold items—it works with a supplier utilizing an insulator called CyrdaCell, which Yorzyk described as a bio-based foam sandwiched between sheets of paper that is curbside recyclable. The company is also working internally to develop a more sustainable ice solution “when we realized the greater ice pack industry didn’t have incentives to move that themselves.”

We go recyclable where we can; and where we have to, we wind up with plastics for which there isn’t a good solution yet. ... I think packaging will be a never-ending effort for us.

HelloFresh endeavors to pack items that come in their own “packaging”—a lemon for example—freely in the paper “kit bag” that contains recipe ingredients. Items such as peas are more problematic. “Our approach is to minimize material,” he said. “We go recyclable where we can; and where we have to, we wind up with plastics for which there isn’t a good solution yet.” The company participates in industry groups such as the Sustainable Packaging Coalition as it looks for better solutions.

“I think packaging will be a never-ending effort for us,” he concludes.

Another area of vulnerability to meal kit sustainability in the minds of consumers is seeing delivery trucks on the streets, Yorzyk said. The company is addressing this with electric vans in some countries where it handles its own last-mile, but uses third-parties in the U.S. This is contemplated in a newly launched program of renewable energy credits, intended to set off 100% of its greenhouse gas and carbon footprint generated by its facilities, including offices, facilities and distribution centers, and its outbound shipping. He acknowledges there are varying opinions on the topic of carbon offsets but said the decision to monetize those issues has been a powerful incentive to further address them.

“By doing that, we learned a couple great lessons by actually monetizing carbon within the organization,” Yorzyk said. “It allowed us to very quickly move to a carbon-neutral stance. It very quickly incentivized us to be working on efficiency projects and doing things like sourcing renewable energy directly so we don’t have to spend later. That’s a great lesson for companies, that you can get into carbon neutrality very quickly.”

Yorzyk describes HelloFresh’s overall approach to sustainability as “materiality,” or looking at impacts in terms of how it intersects with critical parts of its business across a broad group of stakeholders. It’s also good business.

“From a business perspective, we can say we can save money by doing it. Also, it’s risk management,” he said. “Things like climate change, the science is pretty solid, and it looks like if we don’t take action, we are going to have severe problems. So it’s managing those risks, and making sure we’re getting out in front of them. In the world of ESG (environmental, social and governance), companies that take this seriously and take action tend to  have more robust results in general. So it manages risk, it helps us think in different ways and [changes] the way we look at the supply chain. And for HelloFresh, it helps us execute on our mission, which is to change the way people eat forever.”