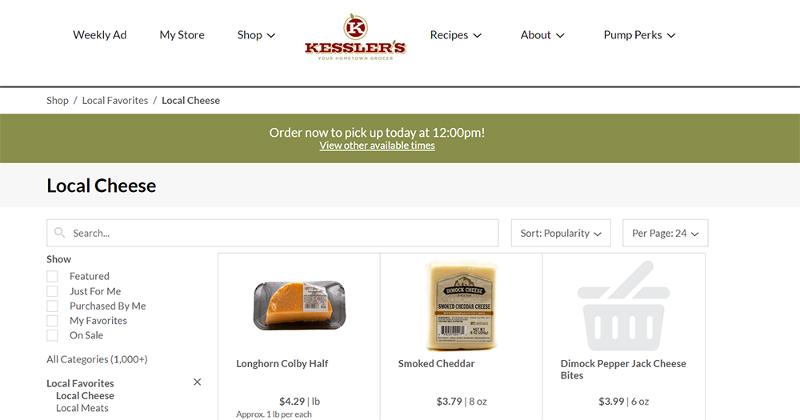 When the Walmart Supercenter located near Kessler’s Food and Liquor in Aberdeen, S.D., revealed it would launch a personal shopper service at the same time as the single-store independent was in the midst of developing its own, the retailer took it as an advantage rather than a setback.

Kessler's officials, in partnership with Freshop, kept an eye on how local customers were reacting to Walmart's personal shopper-driven grocery pickup service to better understand what its shopper base wanted and also added some features that the competition could not provide.

For example, Kessler's does not charge additional fees for orders over $25, and it offers the same price online as it does in-store. To further add to the retailer's small-town feel, personal shoppers send text messages to update customers as they pick their orders, along with in-app updates, and personalized thank-you notes are included in each order.

“They’re paying attention to what people are ordering and leaving personal notes," said Colleen Griffin-Underhill, Freshop’s director of customer experience. "It’s a very smart way to make a connection and build trust with their customers."

At launch, Kessler's promoted its new service through Facebook posts, live events, flyers and radio ads. Through these platforms, the retailer educated customers on how to use the service and app and even helped customers download the app in-store.

As such, the service was met with major interest from the retailer's shopper base, exceeding $100,000 in sales within the first 90 days of its Oct. 15 launch, with average basket rings of about $99 per order.

Kellie Bauman, who leads the team of personal shoppers, said she trains them to pick orders as they would when shopping for their own families. The high level of training, Bauman said, has allowed the retailer to better help its customers "give us the most information in their orders so we can best serve them."

Kessler's also offers its personal shoppers an above-average hourly rate, which Bauman said has caught the attention of local shoppers.

"I think that gave them a feeling of comfort and security that they can trust the people who are doing their shopping," she said.

In the future, Kessler's plans to expand its operations to include more personal shoppers and delivery options.