An analysis of six months of location-based data tracking shopper visits to physical underscores the enormous gains traditional supermarkets have made as a channel of trade during the coronavirus pandemic—and suggest why some alternative food venues (like Trader Joe’s) have recovered from early struggles to participate in that boom while others (Whole Foods Markets) have not.

The pandemic brought a sudden 30% increase to grocery store foot traffic during the second week in March, when shoppers rushed to stock up amid fear and uncertainty, according to the report from Placer.ai. Those figures subsequently slowed when social-distancing and capacity measures to mitigate the virus spread took hold, but rebounded again in June as supermarkets experienced patterns of less-frequent but longer visits suggesting shoppers spent more on every trip they made.

Placer called this behavior “mission-driven” shopping that was well-suited for the wide selections and relatively dense and convenient geographic locations of traditional supermarkets, and is likely to have increased loyalty of those shoppers that have turned to them for such trips.

“Mission-driven shoppers will try to get as much done as possible in a single visit and will be more willing to spend added time in a single store than to add other tops to their shopping trip,” the rpoirt said. “This behavior means stores are getting less visits, but those visits are more substantial. The ramifications of these changes are crucial to grocery brands. If a consumer is willing to spend nearly 9% more time in a Trader Joe’s, even if he pays 7% fewer visits, the likelihood of the basket size increasing significantly grows.”

Separate research from Acosta research found that 37% of consumers now spend more on each grocery trip versus their pre-COVID-19 food shopping purchases. Of those spending more on groceries, 59% claimed their higher grocery bills were due to eating at home more, 52% cited higher prices, and 50% said they’re stocking up more.

When comparing the past six months to the same period the previous year, the average number of visits per visitor decreased, but the number of visits by customers considered “loyal” grew by 9%, Placer’s data showed, defining loyal shoppers as those who visit the same chain twice or more over that period. There was also a 9% decrease in casual visits, or from customers who visited a particular grocery store only once during that period, an effect Placer related to declines in trips and tourism. 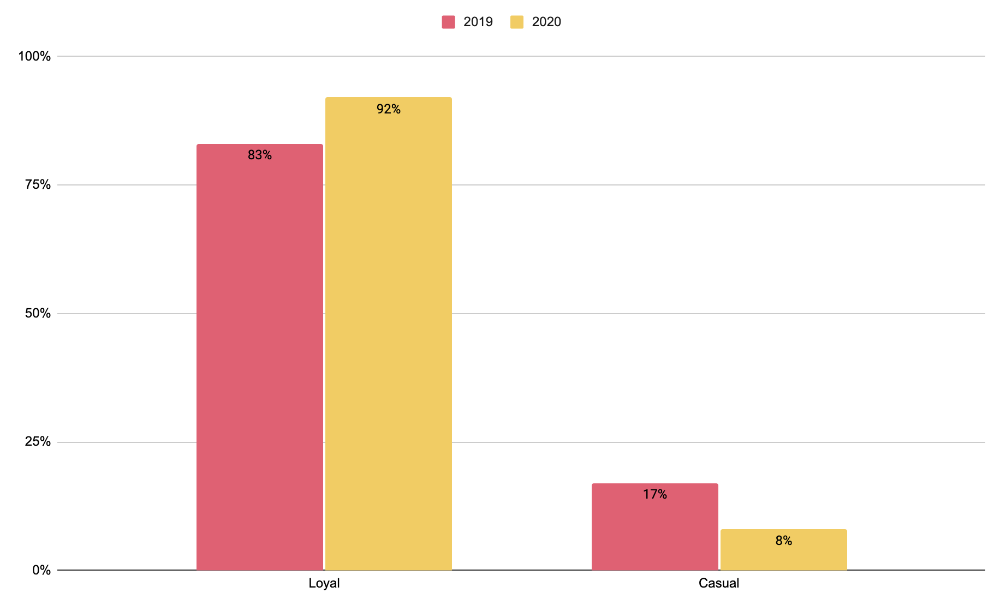 Some grocery chains—notably Winn-Dixie, Albertsons and Kroger—have managed to buck the trend in trip frequency as well, providing a double lift in the last six months, according to Placer data. They were the only of 14 brands to have experienced frequency increases as measured by Placer data, while their counterparts with a sharper specialty focus, like Trader Joe’s and Whole Foods, performed worse in the metric.

Although Trader Joe’s was among the retailers that took a “huge hit” in the early stages of the pandemic, the much-loved Monrovia, Calif.-based store also bounced back better than many of its specialty peers such as Whole Foods, Placer data showed.

Trader Joe’s and Whole Foods, both dropped dramatically during the first two weeks of April with visits down 60% year over year. “Initially, it seemed as though Whole Foods and Trader Joe’s were facing similar challenges where a more expensive product line and niche approach were damaging their ability to thrive in the unique pandemic environment.”

Placer attributes Trader Joe’s superior recovery from this trough to the passion of its shoppers that has helped it be treated like a “mission-driven” counterparts.

“Trader Joe’s customers love the experience there enough that they are willing to come back again and again,” the report said. “On the other hand, Whole Foods is going to need to identify a connection with customers in order to boost their loyalty.” 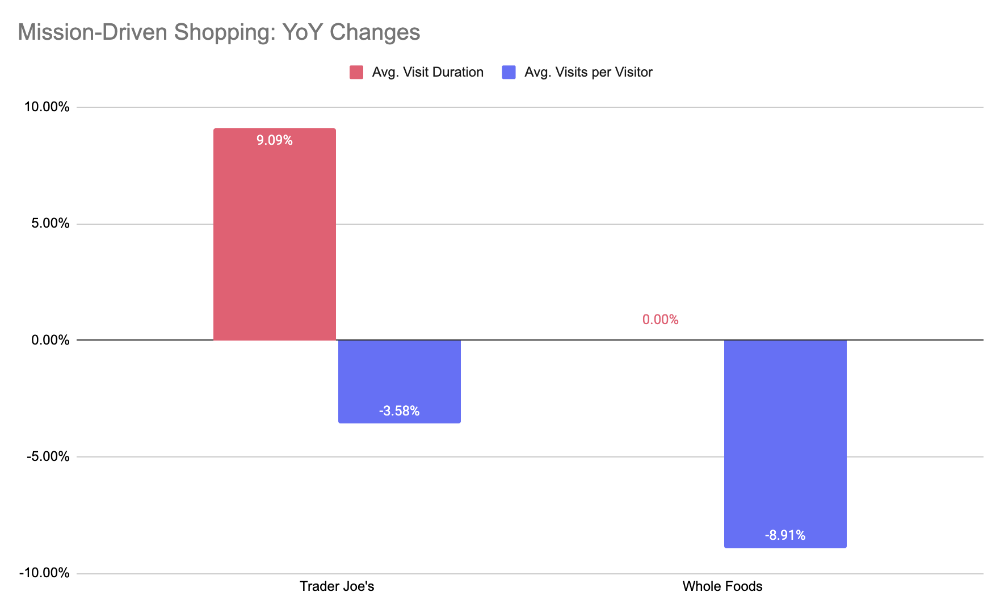