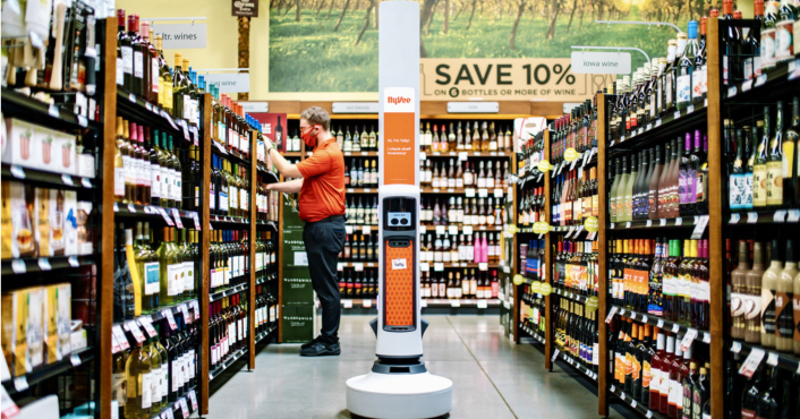 West Des Moines, Iowa-based Hy-Vee has become the latest grocer to try out shelf-scanning robots as it seeks ways to more efficiently track inventory levels and manage restocking, all in service of a better customer experience.

The employee-owned chain, which has more than 280 stores across eight Midwestern states, announced it's deploying San Francisco-based Simbe Robotics' Tally robots in five stores in Iowa, Nebraska and Missouri. Two Hy-Vee stores—in Ankeny, Iowa, and Lincoln, Neb.—already have the robots up and running as of earlier this month; stores in Omaha; Altoona, Iowa; and Lee's Summit, Mo., will add them in the coming weeks.

In late August, St. Louis-based Schnuck Markets announced it would roll out Tally robots to all 111 of its stores after testing and gradually scaling up use of the 'bots in select locations since 2018. Schnucks found better luck with its 'bots than Bentonville, Ark.-based Walmart did: The retail giant pulled the plug last November on its test of shelf-scanning robots from San Francisco's Bossa Nova.

Simbe touts that the data its robots provide as they scan thousands of items up to three times a day can help stores reduce out-of-stocks by up to 30%. That kind of improvement can make a compelling impact on the customer experience, Hy-Vee CIO Luke Tingley said in an interview with WGB. "Any time we have an out-of-stock, it impacts our customer experience," he said. "If they come in and want a product and we don't have it, especially if it's in the backroom, then we've failed the customer."

Beyond helping to minimize those customer-frustrating scenarios, Tingley said he sees potential for the robots to improve store associates' experience, too, by letting them avoid dead-end product searches and use their time in more-productive and customer-facing ways. "Our employees are super-busy throughout the day, and this frees them up to really focus on the customer a little bit more," he said. "Now they get real-time alerts if something is out of stock, and if it's in the backroom, they'll get it."

Tally is designed "to really be the single source of truth of what's happening on the store shelves," Simbe co-founder and CEO Brad Bogolea said in a WGB interview. More-accurate data also supports stores in prioritizing restocks based on sales data and traffic patterns, he added.

Simbe wasn't the only robot provider Hy-Vee considered, Tingley noted, but the retailer found the Tally 'bots to have "a little bit friendlier" footprint and appearance than other options. In their first weeks of trial, the robots have seen a decidedly positive reception from store teams and customers, Tingley said.

Hy-Vee notably did not introduce the robots in its recently opened flagship store in Grimes, Iowa, and its upcoming similarly designed store in Eau Claire, Wis., will not have them yet, either. That was a matter of timing, Tingley stated, and a need to get the new stores' other moving pieces, including a food court and several shop-in-shop concepts, up and running.

Simbe, founded in 2014, calls Tally a "power tool and productivity driver" for stores. "By gaining greater visibility into store conditions, Tally helps streamline operations and ensures that retailers can provide the best customer experience in-store, in addition to making better, more informed business decisions—like more-accurate order forecasting and optimizing the store layout to support sales," the company stated in a news release about the partnership with Hy-Vee.