I typically wait until it’s already raining to buy an umbrella but skies were sunny Thursday afternoon when I popped into the new Amazon 4-Star store in Manhattan’s SoHo neighborhood and did something I rarely ever do.

I’d come to see whether Amazon’s latest foray into physical retail stores would be offering food (spoiler alert: it doesn’t) but stayed to find an eclectic mix of about 2,000 different items. It’s probably the only store in Manhattan where you can buy a greeting card, a blender, a home security system, a Lego set and a laptop in the same place. What connects those items isn’t a trip mission but that they all share the common characteristic of having been rated “4 stars” or more by online shoppers of Amazon’s virtual store. 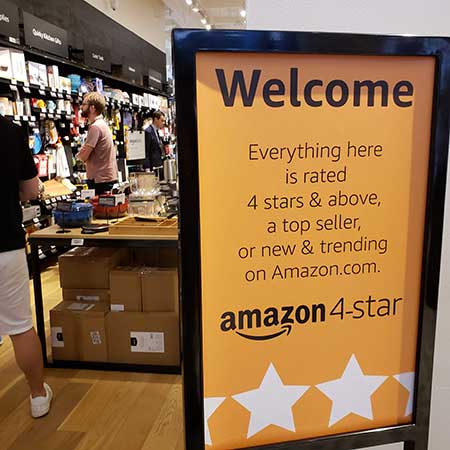 And it was that stamp of approval in the back of my mind—plus the seeming bargain of being offered a 24% discount over the price some non-Prime member would have to pay for the same thing—that compelled me to take an umbrella off the rack. In one transaction, the store made perfect sense.

Amazon has done a clever thing with 4-Star. I was impressed with the authenticity with which the company brought to life the elements of its now-familiar virtual storefront: The vertical shelves along the walls echoed the same categories you’d click online, while the table displays showcased items merchandised with Amazon’s online flair, such as its familiar “Frequently Bought Together” and “Trending Around NYC” reminders, among others, using the same graphics. Many items were displayed alongside a tag quoting an actual product review. 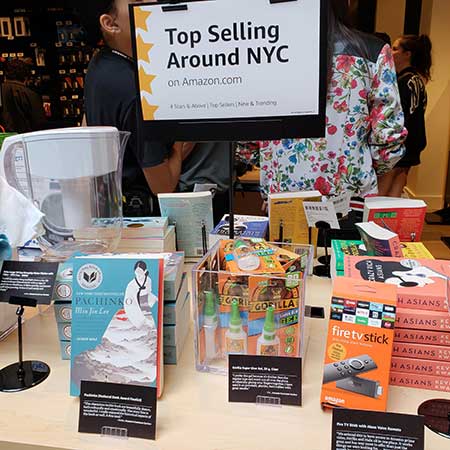 As I browsed, I realized how the store addresses many of the frustrations I encounter during my own online shopping trips, particularly how to browse when you’re not sure what it is you want to buy; how to cut through the clutter of millions of items on the site; and how can I can be sure I’m buying what I think I’m buying.

Many of the high-end items, like Amazon’s home security systems, could be tested and demonstrated in the store in the style of supermarket sampling. Other things that might get lost online have a focused place for discovery. Mostly, though, I’d describe it as a gift store you’d go to when you’re not sure what to buy. The selection is just wide enough to meet a variety of needs, and the question of whether it’s good or not has already been decided for you in a triumph of crowdsourced data. You don’t need to be an expert in kitchenware, for example, to buy a kitchenware enthusiast a gift.

While the store likely won’t approach the wild ambitions of Amazon Go, there’s no reason 4-Star couldn’t work in more locations. Put one in a place where there’s high foot traffic and where people want to shop—a shopping mall, for instance—and it would probably do pretty well, especially as the holidays approach. Given how hard the shopping mall industry has fought Amazon over the years, it would be an ironic kind of savior. 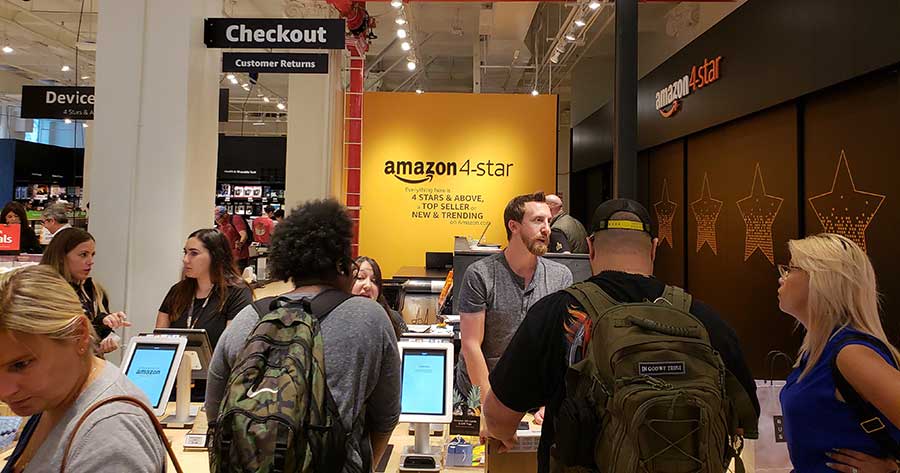 Amazon isn’t necessarily rolling on all its physical retail stores yet. My last substantial shop at Whole Foods, for example, was a disappointment on many levels—beginning with an out-of-order parking-garage elevator. I was also dismayed to see service departments pushing shoppers to self-service (a deli worker directed us to a cooler of presliced and wrapped cold cuts, but they weren’t cut as thin as we’d have liked). Similarly, there appeared to be more fresh seafood in packages on ice and fewer fishmongers behind the counter than usual. And it was difficult to tell whether the Prime benefits on sale items made a real difference, as it seemed fewer things we typically buy—and customarily pivot based on the week’s deals—were on sale in the first place.

They can’t all be five-star ratings.