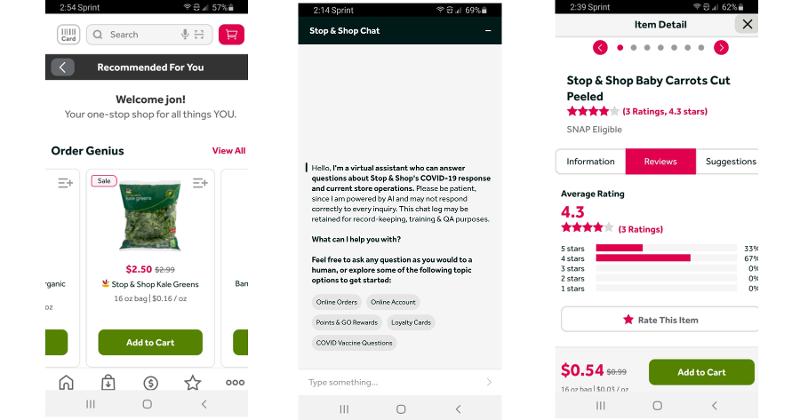 The digital backbone supporting Ahold Delhaize USA’s retail brands—popping up in the form of new apps, retooled websites, behind-the-scenes processes and the overarching omnichannel strategies at brands like Stop & Shop, The Giant Co. and Giant Food over the last year—goes by the names of their respective brands externally, but is referred to around the company as “Prism.”

“Internally at PDL, we take naming and symbolism pretty seriously,” Taneja said in an interview. “So believe it or not, we actually had an internal contest to come up with a name and a logo. There was several entrants, and Prism won, because it had a lot to do with its symbolism.

“A Prism takes an ideas from everywhere. You’ve got the brand strategies coming in. We obsess on the customer feedback. We look at the competitive marketplace. That’s the light coming in,” Taneja said. “And then we’ve got a quantitative standardized prioritization model that really follows what’s best for the customer and what’s best for the business, and that’s the refraction: With all these ideas coming in, Prism gives them their own hue.”

This approach to building gets to the heart of Ahold Delhaize’s U.S. strategy, devoting central efforts to big, scalable ideas that, in turn, are influenced by, and ultimately deployed by local brands in a way that looks and feels like their own. Prism, for example, has an accompanying logo conveying the refraction described above, also utilizing strong lines symbolizing the decision-making that went into it, but officials said they couldn’t share it with WGB because it has not been approved for public viewing. Picture a mix of a stylized illustration from a physics textbook and a Pink Floyd album cover—but to consumers it looks and feels like a virtual interpretation of Stop & Shop, or Giant, and coming soon: Hannaford or Food Lion.

Whatever its look, the principles behind Prism are intended to drive what Taneja described as a “cohesive and congruent” omnichannel experience for shoppers, backed by a connection to internal processes, and adjusting as needed. “Prism follows the online journey of the customer, and then hands the baton to some of our other internal systems that handle, picking and warehouse management and all of that.”

Taneja joined Peapod Digital Labs two years ago, having previously held key tech roles at other retailers such as Walgreens, where he led its online pharmacy business; Abercrombie & Fitch; and American Eagle Outfitters. While COVID pandemic sparked maturity in grocery e-commerce more suddenly than expected, “it was pretty clear even then [in 2019] that in the entire spectrum of e-commerce, no subsector was as ripe for disruption quite like grocery was,” Taneja said. “I think those projections came true, and then some, last year, so very glad that I got the opportunity and that me and my team have been able to make an impact here at PDL.”

As he had had experienced in other retail channels disrupted sooner by the online consumer migration, Taneja said the cohesive and congruent experience—an environment that “feels like” the actual one in stores—was the goal. This fosters deeper relationships and stronger loyalty with shoppers.

“When you think of the role online has to play in maintaining the continuity of the experience—delivering the same kind of loyalty programs as customers experience in the store, the same kinds of coupons and promotions, and product philosophy, and merchandising philosophy that they experienced in the stores, all of that can truly be delivered by your own proprietary platform. And that that’s the vision behind Prism.”

The developers behind Prism were divided into seventeen teams, each focused on a certain mission within the product, and built to adjust based on how the products are received and customers change, or what Teneja called “an agile, continuous delivery model.”

The COVID-19 pandemic exploded in mid-launch last year—Prism was already live at Giant Food and Giant Co., but yet to be deployed at Stop & Shop—testing the flexibility and responsiveness of those teams to adapt their products to resulting macro and consumer shifts.

“What we learned through last year as COVID hit is of course there was a surge in demand, but the kinds of things that customers were looking for have been different from what they were from a pre-pandemic,” he said.

“We accelerated things like chat bot and live chat to be able to meet the customer where they had questions about policies and what click-and-collect and pickup would look like. Customers wanted to know where the driver was as they made their way to the customer's doorstep. And so we built real-time driver tracking on a map to give customers that visibility.”

And as shoppers visiting stores also changed their behavior—pursuing a new kind of trip based on a purposeful mission to gather specific items and curtail the time they might have once spent browsing aisles—Prism swiftly rolled a product location capability that helped shoppers find where items where located in stores.

“We measure these outcomes, both qualitative and quantitative, and we react to it,” Taneja said. “If we put something out and it isn’t doing as well as we expected, then we dive deeper, figure out what we could do better, than go out and release another version of that till we get to a level of satisfaction.”

"When the pandemic hit, we were able to accelerate vs. trying to invent a new playbook."

So while COVID wasn’t on anyone’s radar when Taneja first arrived at Peapod, that Prism was able to adjust was by design.

“I think we did a lot of hard work in the early days of PDL. Uh, so that when the pandemic hit, we were able to accelerate certain areas vs. trying to invent a new playbook and a new structure from the ground up,” he said. “I’d say there have been some micro-moments of learning—things we hear from the customers that are important to them that we hasn’t expected to, but nothing I’d say that came as a major surprise, or one that we couldn’t handle.”

Prism is built to give brands room to experiment. For example, Stop & Shop’s recent launch of a self-service pickup locker is activated through the app, and so includes associate-facing instructions and training, and capabilities offered currently only to the orders they may use it. Elsewhere, the company is piloting a test of a capability allowing shoppers to use the app to alert the stores when they are departing  for a pickup order in some locations. PDL in turn will analyze the efficacy and customer reaction to these tests and update the apps as needed updated based on plans to proceed with or expand these tests. This helps to smooth larger scale rollouts, and present new offerings in a way that is consistent with the brand.

This ability to adjust and express authenticity in the experience speaks to the value of developing and controlling Prism vs. outsourcing those capabilities—although certain third-party features are integrated when they make sense, he said.

"The cohesion of experience is much harder to deliver when you don’t have the power to customize, and control how your merchandising philosophies show up."

“The cohesion of experience is much harder to deliver when you don’t have the power to customize, or control how your merchandising philosophies shows up, the savings and couponing, and your loyalty philosophy shows up,” he says. “That's a big component of our proprietary platform, providing an integrated congruent experience across all of our channels. That said, we do have elements of our tech stack, where it makes more sense to partner vs. building something. So we’re always looking at what is a strategic component, offline experience back our technology stack, where it makes sense to build something and where we would benefit by a third-party innovation.”

The digital rebrand at Stop & Shop, introduced last summer, accompanied a new reward program run through the app called Go points. Users browsing for items can today see product ratings they once saw only on store shelves, like Guiding Stars (health and wellness) and How Good (sustainability), in addition to detailed product descriptions, reviews and suggested for those that may not be available.

Customers are responding. App ratings for Prism-created products have increased by 66% over the last year—from an average on Apple’s iOS of 2.6 stars to 4.3. “That’s a pretty big jump in my experience,” Taneja said, “and there’s no one thing that I can point to and say, ‘Hey, this is what did it.’ It’s a combination of a lot of factors, and [a result of] continually improving the customer experience. That’s a notable accomplishment, in the face of major disruption.”