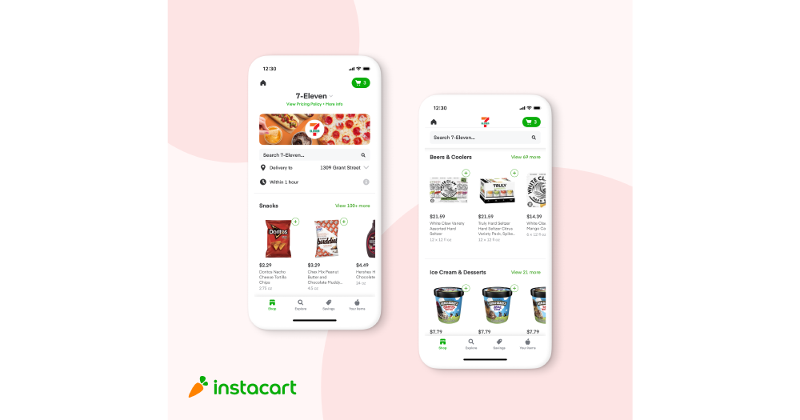 Imagine Slurpees delivered to consumers’ doorsteps in as fast as 30 minutes. While it’s not a reality yet, America may be one step closer, as today Instacart and 7-Eleven launched a partnership to offer same-day delivery to customers on thousands of convenience, alcohol (where available), grocery and select prepared foods items. The multiphase launch is now live in more than 750 stores in Dallas, Miami, Baltimore and the greater Washington, D.C., area, with plans to expand nationally to more than 7,000 7-Eleven stores across the U.S.

The collaboration marks a first for San Francisco-based Instacart, as 7-Eleven is its inaugural national convenience partner. And while Slurpees won’t be among the initial offerings, the companies say they plan to expand the 7-Eleven catalog on the Instacart marketplace in the coming months.

“We view the 7-Eleven partnership as just an extension of the mission we’ve been on from the beginning, which is connecting consumers to the retailers they love and enabling brick-and-mortar retailers to better serve customers online in this new e-commerce economy that we’re all living in,” Instacart President Nilam Ganenthiran told WGB.

Ganenthiran believes 7-Eleven, the world’s largest convenience retailer, offers unique benefits to Instacart customers. “7-Eleven is a beloved brand. Most of us grew up with a 7-Eleven in our neighborhood, and remember our first Slurpee,” he said. And given the c-store’s expansive reach, with more than 7,000 locations across the country, the partnership will enable Instacart consumers to get their convenience items delivered in as little as 30 minutes, he added.

“We’re back at pre-pandemic levels, and we have been able to add hundreds of thousands of personal shoppers during this time,” Ganenthiran told WGB. “One hundred percent of our orders are same-day and two-thirds of those are within two hours.”

7-Eleven delivery via Instacart is available as early as 8 a.m. and as late as 10 p.m., with expanded delivery windows launching in the months ahead. Given the speed with which Instacart personal shoppers will likely navigate a c-store vs. a traditional grocery store or mass merchant, shorter delivery times may also prove an added benefit of the partnership.

“This is really a new chapter for us both in terms of speed of delivery and the number of hours offered,” Ganenthiran told WGB. “Our hypothesis is that just like every other retailer [with whom we’ve worked], we’re going to bring a whole new set of consumers online with this partnership.

“It’s also a new set of occasions and very different occasions than when buying a whole cart and planning for the week. Sometimes people need a full fridge or pantry restock, and sometimes they just want a snack. Sometimes you need a late-night delivery of batteries for the remote. We want to be there for consumers for any of those occasions.”

“7-Eleven got its start 93 years ago because of its forward-thinking innovation that forever changed the way people shop,” said Chris Tanco, chief operating officer of Irving, Texas-based 7-Eleven, in a statement. “Our success then, and today, is built on continued innovation that ensures we continue offering our customers exceptional products and services when and where they want them. Adding 7-Eleven to Instacart’s platform was a logical step; we are able to offer even more customers the 7-Eleven conveniences they know and love.”

With an increasing number of players in the grocery delivery game—and retailers such as Walmart, whose newly launched membership program is poised to compete with Amazon Prime—can Instacart continue to expand with the same velocity?

Ganenthiran sounds confident that there’s enough business to go around.

“First and foremost, we love when brick-and-mortar retailers offer ways for consumers to connect with the online experience,” Ganenthiran said. “The North American grocery business is very large. It’s a trillion-dollar business, and in the U.S., it’s regionally fragmented with customers who love the brands they’ve been shopping. Our mission is to empower brick-and-mortar retailers to come online, and the way we have approached that is to be an ally not a competitor to our retailers.”

Instacart currently partners with more than 400 national, regional and local retailers, providing consumers across the U.S. and Canada with same-day delivery of groceries and goods from over 30,000 stores in more than 5,500 cities in North America. It is available to more than 85% of households in the U.S. 7‑Eleven operates, franchises and/or licenses more than 71,100 stores in 17 countries, including 11,800 in North America.

Customers in Miami, Washington D.C., Baltimore, Dallas and the surrounding areas can begin shopping from 7-Eleven on Instacart today by visiting www.instacart.com/store/7-11 or downloading the Instacart app on their mobile device.