Jeff Bezos, the visionary founder and CEO of Amazon who grew an online bookstore into arguably the world’s most creative, disruptive and influential retailer, will relinquish his role of CEO later this year and become its executive chairman. 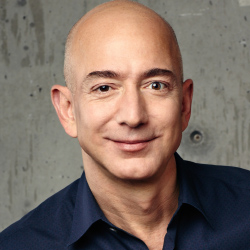 Andy Jassy, currently CEO of Amazon’s Amazon Web Services division, will become CEO when that transition occurs in the third quarter, the Seattle-based company in a surprise headline to its fourth-quarter and 2020 fiscal-year financial results released late Feb. 2.

“Amazon is what it is because of invention. We do crazy things together and then make them normal,” Bezos said in a release. “We pioneered customer reviews, 1-Click, personalized recommendations, Prime’s insanely-fast shipping, 'just walk out shopping,' the Climate Pledge, Kindle, Alexa, marketplace, infrastructure cloud computing, Career Choice, and much more

“If you do it right, a few years after a surprising invention, the new thing has become normal. People yawn. That yawn is the greatest compliment an inventor can receive. When you look at our financial results, what you’re actually seeing are the long-run cumulative results of invention. Right now I see Amazon at its most inventive ever, making it an optimal time for this transition.”

Amazon, which posted $386.1 billion in sales and net profits of $21.3 billion for the fiscal year ending Dec. 31, has disrupted entire industries, including grocery, which was set on its ear when the company acquired Whole Foods Markets but has been even more influenced by its leadership in online shopping that has raised the standard of shopper expectations for online service and deliveries, and pressured competitors to invest hundreds of millions behind programs such as marketplaces, paid subscriptions and higher-paid hourly workers.

Its technology innovation, in the meantime, helped to make things such as cashierless physical shopping a reality while a newly launched chain of physical grocery stores, known as Amazon Fresh, are threatening to disrupt supermarket business in the “real world” through pricing power and a powerful loyalty program and what’s expected to be hundreds of new locations. Though still young in the grocery business, Amazon took the top spot in dunnhumby’s annual Retail Preference Index, which ranks grocery retailers on a combination of preference drivers including quality, value and speed.

“I don’t know of another company with an invention track record as good as Amazon’s, and I believe we are at our most inventive right now,” Bezos said in a memo to employees shared by the company.

“Being the CEO of Amazon is a deep responsibility, and it’s consuming,” he added. “When you have a responsibility like that, it’s hard to put attention on anything else. As exec chair I will stay engaged in important Amazon initiatives but also have the time and energy I need to focus on the Day 1 Fund, the Bezos Earth Fund, Blue Origin, The Washington Post, and my other passions. I’ve never had more energy, and this isn’t about retiring. I’m super passionate about the impact I think these organizations can have.”