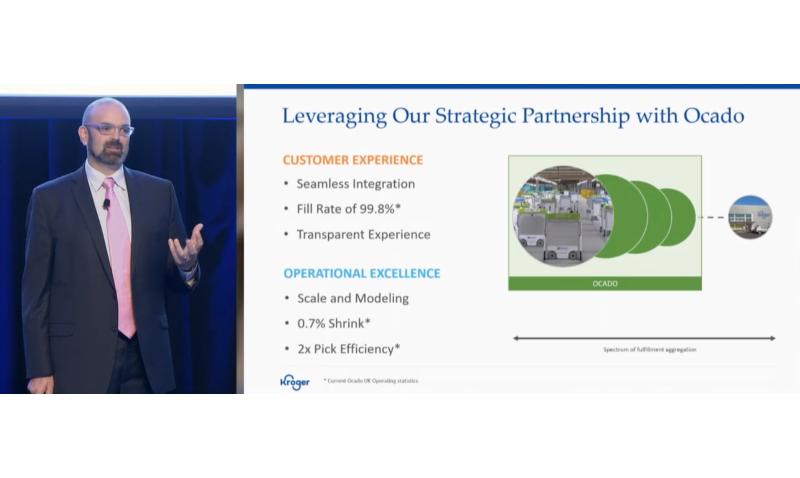 The sophisticated grocery e-commerce facilities now under construction in the U.S. through a partnership of The Kroger Co. and Ocado won’t necessarily serve the same purpose as Ocado-run counterparts in Europe, and for that matter, may not need to resemble one another in terms of the roles they will play.

Flexibility, in fact, is not a shortcoming but a strength of the Ocado-Kroger partnership, according to Yael Cosset, Kroger’s chief information officer, speaking during a presentation at the retailer’s investor conference this week in New York. In keeping with themes of the event, during which the Cincinnati-based retailer provided investors a closer look into its strategies, Cosset’s addressed some—but not necessarily all—of the lingering questions around the partnership.

Ocado, based in the United Kingdom, has developed vast robotic warehouses it uses in part to run a pure-play internet grocer in England. Kroger announced in 2018 it had signed a deal with Ocado Services to license its technology and software exclusively in the U.S., and it has already begun work constructing three U.S. “sheds.”

“I think part of the assumption in the industry is that Ocado is only one model, because they have optimized their model in a market like the U.K., where the geography and the distribution of population is such that you can actually satisfy the demand as an e-commerce pure-play retailer,” Cosset said in a Q&A session. “That is not the approach we have been taking with Ocado in the U.S., [and] definitely not the innovation they have brought to the table since day one.”

Instead, Cosset said, Ocado will be one part of an online ecosystem that can flex with demand, and therefore align with the retailer’s “seamless” ambitions and a customer base that varies from market to market in terms of their engagement to online shopping and their demands for immediacy. Ocado, Cosset said, will play a role in that seamless ecosystem, but not the only one.

“The only way to really, truly support all of these experiences is by evolving our distribution network,” Cosset said, taking advantage of Kroger’s store footprint and other small and medium-sized distribution points. Ocado, he said, could support profitable e-commerce when demand reaches a point at which Kroger can scale. As in the U.K., that could be next-day delivery focused, but he said Ocado could also bring benefits to assembling orders for store pickup, for example, citing superior order accuracy and benefits of software updates based on Ocado’s lengthy experience. As WGB previously reported, Kroger is also building an immediate-fulfillment app called Kroger Rush in some markets based on the Ocado Zoom capability in the U.K. Zoom, among other things, is experimenting with a robot chef that builds meals-to-go.

This is all important, Cosset said, because online offerings bring what he called “massive incrementality” to Kroger, with more than 50% of its online revenue coming from competitors.

“Equally important, that incrementality actually increases over time,” he continued. “The more customers engage with us, the more they use different modalities, the more they get exposed to that personalization, to that special experience, and the more they bring to the Kroger ecosystem.”

Kroger officials acknowledged Ocado facilities underway in Monroeville, Ohio, where Kroger has significant market share and a maturing e-commerce offering, would have a faster budgeted ramp-up than a counterpart also being built in the Kroger-free city of Groveland, Fla. But Cosset noted that beyond the cost to build, operating costs would vary based on demand, and he hinted—but didn’t quite reveal—plans for partnerships to tackle that white space, “taking advantage of a few levers which we will remain silent about for now.”

An industry analyst, Andrew Wolf of Loop Capital, told WGB recently that he suspected that drug chain Walgreens could be one of those, noting the companies are now testing partnerships of in-store shops and pickup in several U.S. markets.