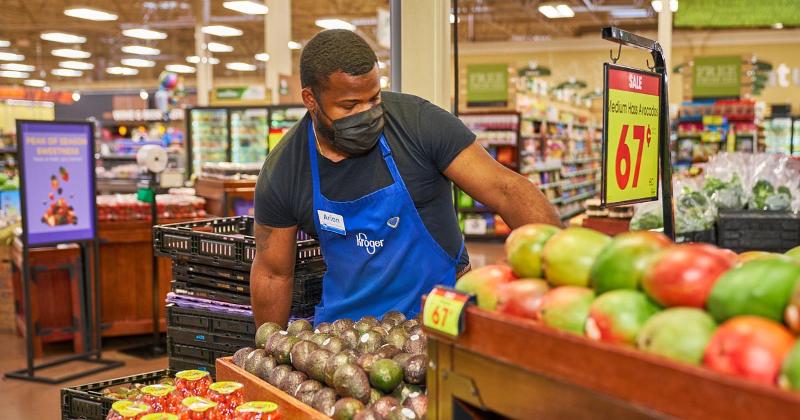 Financial results from its fiscal second quarter demonstrated how Kroger Co. is moving to be sure that  pandemic-influenced habits delivering wild near-term sales growth—more meals at home, less shopping around, and increased use of omnichannel options—become a part of the new normal.

To that end, the Cincinnati-based retailer may have eschewed potential margin growth by continuing to invest in pricing and promotions during the quarter, seeing those actions as necessary benefits over the long term. While continuing to suspend fees for online order pickup was a big part of this—and not coincidentally, a driver in 127% e-commerce growth in the period—officials noted that retail prices rose slower than inflation in volatile fresh categories like meat and deli. Kroger was also able to resume cost-savings initiatives that were interrupted upon the COVID outbreak in the first quarter, pledging to meet a previously stated goal of reducing costs by $1 billion in reductions this year. That too is part of the retailer’s long-range plans.

“Six months into the pandemic, while there is still much we cannot predict—we have greater clarity in many areas across the business,” CEO Rodney McMullen said. This is providing confidence in future results, he added, as the company updated guidance for the fiscal year and said fiscal 2021 would likely be stronger financially than anticipated before the pandemic.

“We believe a number of the impacts of COVID-19 will be structural and lasting,” he said.

As previously reported, Kroger grew sales by 8.2% to $30.5 billion and identical-store sales by 14.6% in the period, which ended Aug. 15. Revenue and earnings-per-share both exceeded consensus expectations. Gross margin as a percent of sales was up by a modest 5 basis points to 22.8%--a profit growth rate less than the 46-basis point figure Kroger realized in the first quarter and well below that reported by some rivals over a similar period.

“From our perspective, we believe it’s very important that we continue to deliver value for customers and we’re staying very true to that plan,” Gary Millerchip, Kroger’s chief financial officer, said in response to an analyst question. “And when we look at prices … for us, it’s not just about everyday low price but it’s about the promotional plan, it’s about the investment in digital. And we feel like we’re on a very clear path to deliver value for the customer that will drive long-term loyalty.”

Sales tapered some over the course of the quarter, with comps running 12.5% in the period’s final month, which Millerchip attributed in part to a reduction in federal stimulus and SNAP benefits. Through the first weeks of the current quarter, comps remained in the low double-digits.

“I think we are seeing some gradual … return to patterns that customers get comfortable with in a COVID environment,” he said. “Deli/bakery is positive again, which I think shows that customers are starting to at least return to some of those [normal shopping] behaviors and certainly in areas like specialty cheese and floral, it’s really encouraging to see those categories turning to sort of low to mid-single-digit ID sales as well.”

In prepared remarks, McMullen spoke of how adjusting to stresses of the pandemic validated its ongoing Restock strategy, pointing to what he called “competitive moats” between Kroger and rivals in fresh foods, private brands, personalization and what he calls “seamless” or omnichannel capabilities.

While traffic to stores was down, McMullen said the retailer gained share in the period on bigger baskets, and its performance in fresh food sales. In private brand, McMullen noted sales of “big pack” platform was up “well over 50%,” while its premium Private Selections brand saw a 17% sales gain and the better-for-you Simple Truth line grew by more than 20%.