Officials of Kroger and Ocado in a press event this week formally acknowledged the launch of Kroger's first two high-tech customer fulfillment centers, bringing what they said would be a new level of service, quality and economic viability to the fast-growing but long vexing issue of orchestrating online grocery profitably.

"It really is a huge, monumental day in Kroger's history and in the grocery industry," CEO Rodney McMullen said.

The facilities in Monroeville, Ohio, and Groveland, Fla., bring grocery delivery into an "ecosystem" of omnichannel solutions for the Cincinnati-based grocer that already includes store-fulfilled orders, pickup capabilities and direct-shipped orders that exceeded $10 billion in sales last year, helped along by an explosion of demand due to the coronavirus pandemic.

"This could not come at a better time and is really helping us accelerate the growth and capture all of that growing demand from our customers," Yael Cosset, Kroger's senior vice president and chief technology and digital officer, said. "'Seamless' is about presenting to customers what they want—the fresh food solution, the products that really matter and makes a difference in their life, but also bringing it to them in an experience that is differentiated, [and] fits the context of their day.

"With the addition of our first customer fulfillment center, we not only expand our work ability to capture that growing demand, but we are also going to be able to bring higher quality and a higher reliability of experience," he added.

As demonstrated in the U.K., where Ocado operates as a retailer, and in international markets where it serves as a technology partner to local grocers, Ocado touts a proprietary system built on robotics—more than 1,000 robots whizz about a grid storage structure collecting bins and delivering to sophisticated pick stations before returning back onto the grid—with artificial intelligence capabilities guiding and sharpening decisions about, for example, where to return bins and how to pack them. This all goes toward optimizing the assembly of grocery orders for delivery. Officials say this improves order quality and the digital shopping experience by reducing or eliminating issues such as stockouts and handling errors and by supporting faster fulfillment at a lower cost than alternatives such as fulfilling orders from stores or from smaller automated facilities.

Kroger and Ocado announced an exclusive U.S. partnership nearly three years ago that called for them to build as many as 20 such outlets; Kroger officials most recently said they would evaluate performance at the 11 locations so far announced or under construction. Each of them costs tens of millions to build.

"When we announced our partnership in 2018, we did so with obvious confidence that us grocery shoppers were primed to make online grocery a core long-term channel. 2020 has turbocharged that demand," Tim Steiner, co-founder and CEO of Ocado, said during the event.

Steiner said the success of the partnership will come as Kroger brings its abilities in fresh food and customer relationships and ambition to gain share online with Ocado's technical capabilities.

"Our combined teams have worked tirelessly to lay the foundations of a fulfillment ecosystem that will drive a step-change for online grocery in the U.S.," he said.

In Ohio, the Ocado facility will support a market where Kroger has operated for more than 130 years and currently enjoys leading food market share through hundreds of grocery stores. It will face a different kind of test in Florida, where Kroger has virtually no current store footprint and is, in effect, unleashing a central facility with the volume potential of a dozen or more stores in a grocery market dominated by a well-loved Publix.

The Groveland facility is currently doing a "soft launch" among friends and family at this time; officials indicated they would gradually roll out availability there. In response to a question, McMullen acknowledged that about 55% of the population statewide is familiar with the Kroger name and its reputation for food: "Our focus today is to really to get our CFC open, making sure the customer has an amazing experience and, and build that brand reputation and go from there."

Added Cosset: "The beauty of going into Florida through an e-commerce-first offering is that it allows us to leverage the great assets—the great fresh food solution, fresh assortment, the products that Kroger has been bringing to customers in the U.S. for over 135 years—and merging that with the knowledge and the capabilities that the CFC in Groveland will bring to life."

In a news release, Kroger said its Kroger Delivery is a vertically integrated network, enabling coverage of up to 90 miles from the hub location—and significantly more territory when spoke locations are integrated. 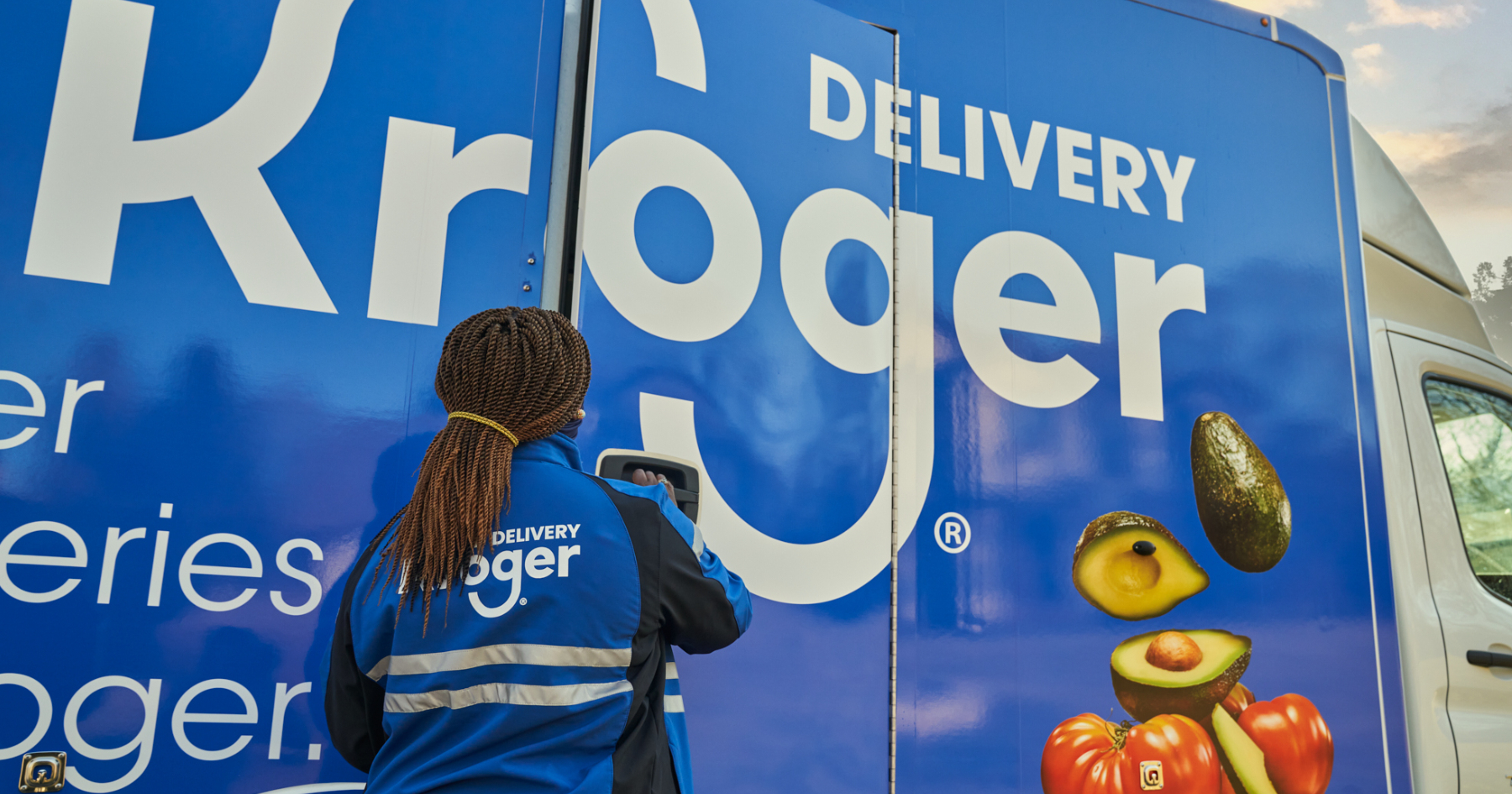 Orders are to be carted direct to consumers via a temperature-controlled Kroger Delivery van, which can store up to 20 orders. Technology also comes into play here, with machine-learning algorithms dynamically optimizing delivery routes, considering factors like road conditions and optimal fuel efficiency.

The Monroe CFC will employ nearly 400 associates, with roles focusing on customer service and engagement, engineering, operations, inventory and quality management, and transportation. McMukllen said delivery driver pay would start at $18.45 per hour.