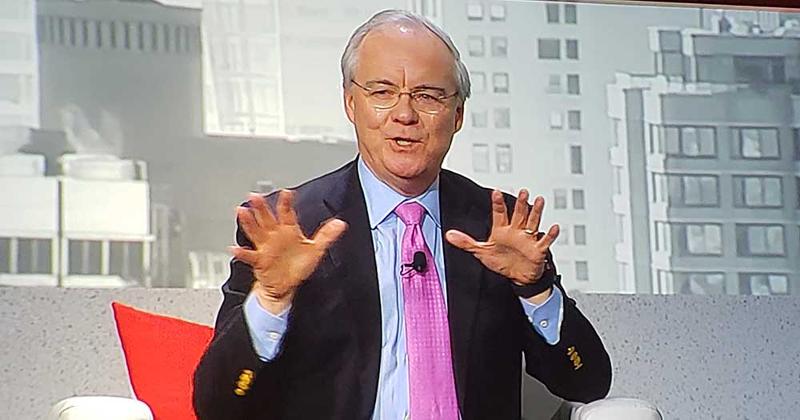 The Kroger Co.’s transformation from a grocery company to a growth company comes at a time when the nation’s economy could also flip, CEO Rodney McMullen said.

“We don’t see anything that would cause us to say there’s a recession around the corner,” McMullen said during a session at the National Retail Federation show. But, he said, today’s strong economy has come with an air of uncertainty about the future, particularly around trade negotiations.

Kroger’s shoppers are at a similar “fork in the road,” McMullen added. “They feel incredibly good about the economy but very nervous about where things are headed.”

Kroger will maintain its course, McMullen said, noting that its adherence to changes in consumer shopping behavior—and not the economy, nor moves of Kroger’s competitors—is fueling its $900 million “Restock” program, now in its second year of a three-year ambition to transform Kroger into a growth company. “I don’t think there’s any easy time to do anything, but what I tell everyone is, once you can actually see [change] then you’re too late,” he said. “So you better be predicting and anticipating where the customer is going.”

McMullen expressed his customary confidence that Kroger would find opportunity in the digital shift, both in serving customers through curated and efficient shopping options, but also through realizing new revenue streams.

One such example is gaining a larger share of advertising trade dollars from its CPG suppliers, which McMullen said it could through technologies such as its digital shelf edge, Kroger Precision Marketing division, and the newly announced “connected store” pilots with Microsoft, utilizing an array of digital technologies at two stores.

“We will disrupt the ad industry,” he said. “We’ll be able to help the customer get information that they need and at the same time we’ll be able partner with CPGs to better spend their money. They will understand exactly what they’ll get out of their spend. And CPG’s spend over $10 billion a year in media.”

McMullen said Kroger is also approaching initiatives differently today than it may have in the past, describing a willingness to experiment with new strategies, such as its recent partnerships with Microsoft and Walgreens. The latter agreement has put Kroger “express” departments and grocery pickup depots in 13 Walgreens drugstores in Northern Kentucky, a deal McMullen said put Kroger within a 1-mile drive of nearly every shopper in the region.

“Years ago you’d try and figure out a thing before you started,” he said. “Today you don’t know what the customer wants, but [our attitude is] let’s try and get something started and let the customer lead us to where it’s appropriate.”

On the company's sustainability initiatives, McMullen said Kroger next month will announce details of a $1 million prize offer for companies that can make progress in food waste reduction.