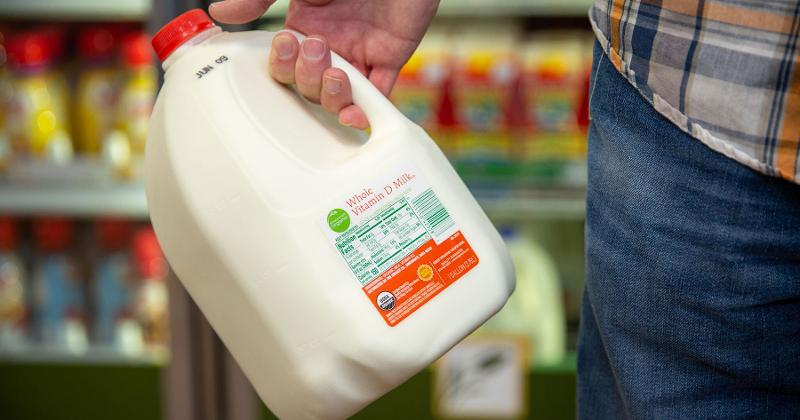 A revamped gallon-sized milk jug introduced by The Kroger Co. two years ago is making a meaningful reduction in the amount of plastic waste the retailer produces, CEO Rodney McMullen said.

Kroger has reduced nearly 2 million pounds of plastics in its manufacturing from a 2015 baseline set as a part of its “Zero Waste” initiative, McMullen said during Kroger's annual meeting last week. “This is a large part due to converting to our lighter weight milk jug, which is 10% larger than our previous jug.”

Kroger’s Westover Dairy in Lynchburg, Va., began manufacturing the new container beginning in 2016. It utilizes the same recyclable polyethylene as the previous jugs, but the design allows the company to reduce plastics in it by 10%. The vessel is used for milk, water, juice and tea products. Kroger had converted eight of its dairy plants to utilize the new jug through the end of its 2018 fiscal year and 15 facilities through May of this year.

Kroger officials expect the jug will save more than 5 million pounds of plastic a year when deployed across its store footprint, which will result in less landfill and contribute to the company’s 2020 sustainability goals, including optimizing 100% of its corporate brand packaging.

McMullen’s remarks last week came in response to a shareholder proposal raised at its annual meeting in Cincinnati. The proposal urged the company to issue a report that assesses the environmental impact of packaging for goods such as dried fruit, frozen meat, cheese and pet food packaged in nonrecyclable pouches or flexible packaging.

The proposal was defeated by 61% of the shareholder vote. Last year, a similar measure was defeated by 71% of Kroger voters, according to As You Sow, the Berkeley, Calif.-based nonprofit that forwarded the measure.

“And as now the [2020] deadline is approaching and as a result of your engagement with us, we’re also developing new goals aimed at further reducing plastic waste in the environment after 2020.”

Specifically, Kroger recommended shareholders reject the proposal based on its current sustainability commitments and steps it is taking this year to map out future commitments that, according to its proxy statement, include an analysis of its own brands portfolio to “fully understand the current state of packaging recyclability,” and setting a timeline to increase recyclability based on that assessment. Kroger also said it would join the How2Recycle product labeling program.

As You Sow argued Kroger lags corporate peers in making a time-bound commitment to phase out non-recyclable brand packaging, saying that Walmart for example has agreed to make all its private brand packaging recyclable, reusable, or compostable by 2025. Further, consumer goods companies Unilever, Colgate-Palmolive, Mondelez International, KraftHeinz, and Procter & Gamble have all made commitments to increase levels of recyclable packaging.

“The Kroger vote continues a series of very high votes this year on plastic pollution issues, confirming increasing investor concern about brand risk associated with continuing to make plastic packaging designed for the dump, not the curbside recycling bin,” said As You Sow SVP Conrad MacKerron. “After more than four years of engagement, the company finally agreed to review its packaging and said it will at some point set targets for increasing the recyclability of packaging. These are welcome steps forward, but still too weak and tentative given the stronger and more specific commitments made by competitors.”

This story was updated July 3 with additional comment from As You Sow.