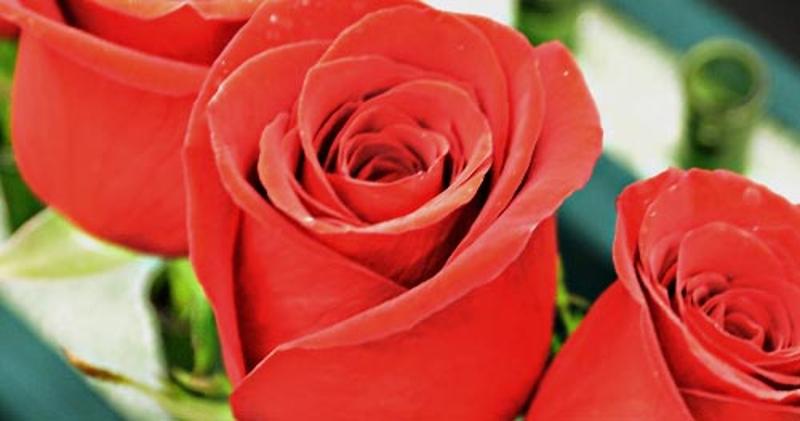 Continuing a tradition that has been in place since 1987, onlookers gathered at the Middletown, Ky., Kroger on Friday to watch its master floral designers assemble the garland of roses that would be awarded to the winning horse of the Kentucky Derby.

It takes about a dozen florists and several volunteers seven hours to complete the garland, which measures 122 inches long by 22 inches wide and weighs 40 pounds.

The assembly team hand inspects about 5,000 Rainforest Alliance Certified roses, choosing only 462 of the most perfect flowers which are then sewn into the green satin backing with individual vials of water to keep them fresh. The garland has the seal of the Commonwealth on one end and the Twin Spires and race number on the other. It is also adorned with green fern and ribbon, and a single rose points upward at the garland’s center to symbolize “the struggle and heart necessary to reach the Derby winner's circle,” according to Kentucky Derby officials.

The making of the Kentucky Derby 145 Garland of Roses pic.twitter.com/5KcRm0NU7I

"The adrenaline flows every year," Kroger florist Carol Belser, who has been making the garland since 1987 and is set to retire next month, told WDRD.com.

The garland of roses has arrived at Churchill to await the #KyDerbypic.twitter.com/ioPykrbQsD

"Seeing that blanket of roses placed across that winning thoroughbred, that is such a warm, touching feeling. First, it was bags of potatoes and everything before the flowers was actually introduced into the stores," she said. "They brought in a small fixture of flowers and asked me to take care of the flowers, and that's how it all started."

The garland of roses and the trophy awarded to the winner of the 145th Kentucky Derby 🌹 pic.twitter.com/n4qQW6m5DI

After the massive garland is finished, police escort it to Churchill Downs, where it is put on display and guarded by the U.S. Navy until it is presented to the winner.

Picture perfect: Final touches are being installed on the Garland of Roses 🌹 at the #MiddletownKY@Kroger right now. @WDRBNews#KentuckDerbypic.twitter.com/7FWW2ySa99

The tradition of presenting roses to the winning horse and jockey started in 1896 when the winner, Ben Brush, was given a floral arrangement of roses and lilies. The gesture took off and by 1904, red roses were the official flower of the Kentucky Derby. The roses were first assembled into the garland that is seen today in 1932 when it was presented to Burgoo King.

Kroger took over the creation of the garland in 1987, taking over for Kingsley Walker florist.

The #kentuckyderby is bizarre for $1,000, Alex. Stopped at a random neighborhood bar for a drink after dinner. The group from Derby winner Country House was here, brought in the garland of roses and planted it on the bar. Can’t script that. pic.twitter.com/W0pZKmcbJe