Approaching something of a virtual final frontier, Kroger Co. said Tuesday it would enter the Northeast U.S. for the first time through a new automated customer fulfillment center to be built in partnership with British tech partner Ocado.

The retailer also announced it would build four additional Ocado facilities intended to expand its delivery network, including two fully automated units in South Florida and two new sites to be built in California. One of the new Florida microfulfillment units will enable 30-minute delivery on a 10,000-item assortment, marking the debut of the ‘Zoom’ offering that Ocado uses in the U.K., as well same-day and next-day delivery of 35,000 items.

The five new sites represent a deeper commitment on behalf of Kroger and Ocado to their exclusive U.S. partnership and indicate that the pair's entry into Florida earlier this year—also a new market for Kroger—was meeting or exceeding goals. Earlier this year, Kroger officials indicated they would wait to evaluate the performance of the 11 previously announced facilities before expanding further. Initial plans hatched in 2008 called for as many as 20 such facilities in the U.S.; each costs tens of millions to build.

Kroger, which is the largest U.S. traditional grocer, is at work on a plan to double its online sales to $20 billion, while also doubling these sales' associated profitability, by 2023. Ocado is playing a role in that through the new facilities and software that orchestrates efficient picking and assembly of orders. Other initiatives, including a recently announced deal with Instacart that would offer 30-minute delivery from Kroger stores, is also contemplated as part of the goal.

Superior efficiency through the automated facilities and marketing revenue associated with the volume of online sales through the Kroger platform will support profitable growth, officials say.

“Kroger Delivery is a thriving part of our dynamic ecosystem and is transforming grocery e-commerce and meeting a range of customer needs through the introduction of first-of-its-kind technology in the U.S. developed by Ocado,” Rodney McMullen, Kroger’s chairman and CEO, said in a statement. “Kroger’s growing seamless ecosystem continues to scale, and we're committed to doubling both our digital sales and profitability rate by the end of 2023 and Kroger Delivery will help us reach this target.

“We feel great about the momentum we’re experiencing with Kroger Delivery and our partnership with Ocado and are strategically leveraging our assets to expand our operations in existing regions as well as enter new geographies on the East Coast that leverage facilities across a growing range of sizes,” McMullen continued. 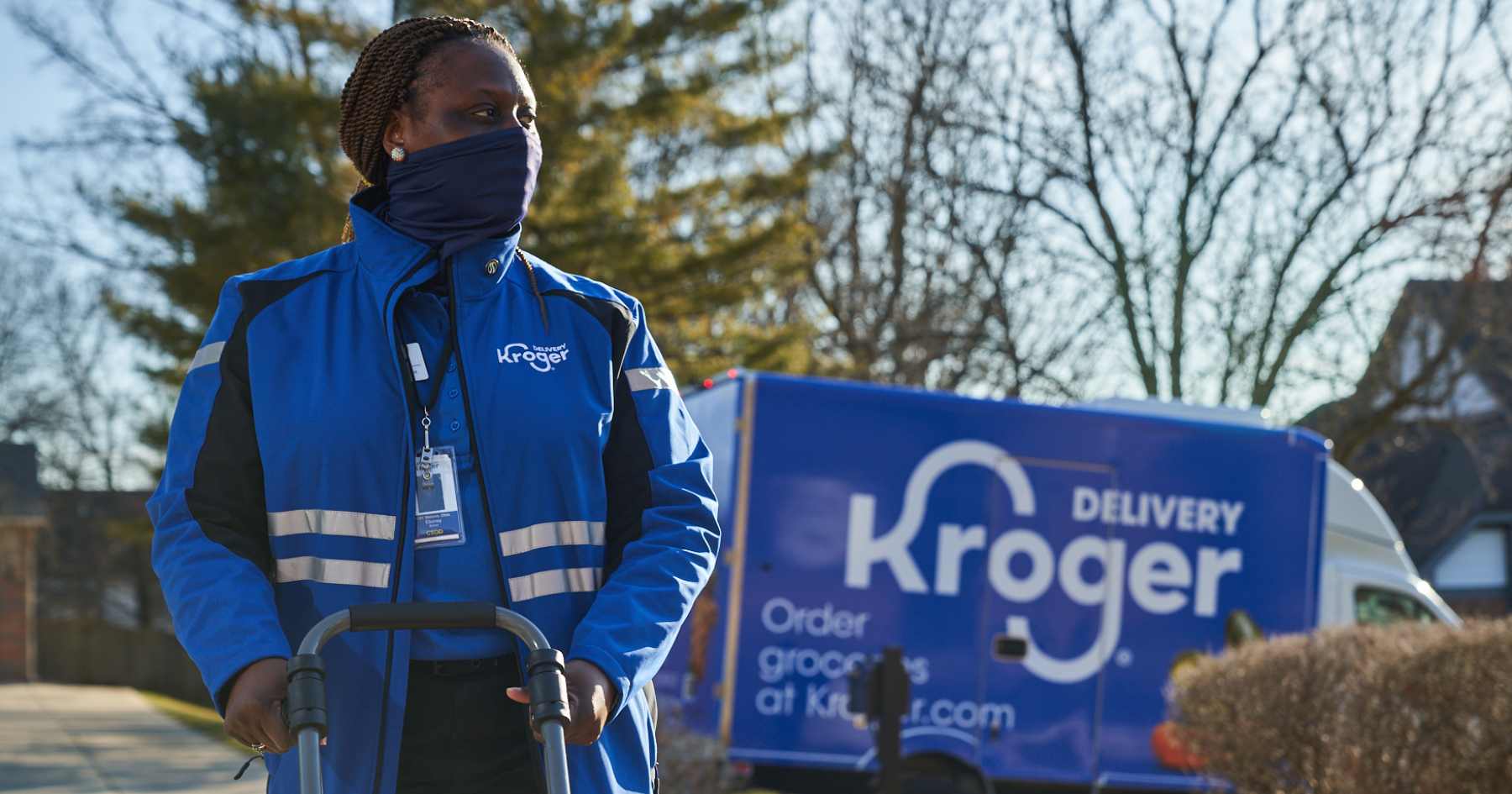 Kroger Delivery will support a goal of doubling online sales to $20 billion by 2023, the company said. Photo courtesy Kroger.

Kroger said additional details about the newly announced facilities would come at a later date but outlined the following initial plans:

Northeast: Kroger will enter the Northeast for the first time, offering Kroger Delivery enabled by a customer fulfillment center that will meet the need for same-day and next-day grocery delivery demand.

California: Kroger will expand its existing operations and boost capacity in with the addition of two CFCs. The medium- and smaller-sized facilities will meet the need for same-day and next-day grocery delivery, the company said, and would presumably accompany a previously announced warehouse to be built in the “West” (Kroger has been deliberate regarding its Ocado announcements, typically identifying regions—as it did Tuesday in the Northeast—before revealing specific plans on a location and timeline).

Florida: Kroger Delivery launched in Central Florida earlier this year, and the operation has ramped up faster than expected, unlocking additional ways of executing and operating and resulting in high customer repeat rates and net-promoter scores, the company said.

To continue driving momentum, Kroger will enter South Florida and introduce two smaller-sized fulfillment facilities. These will join the already-live CFC in Groveland, Fla., as well as “spoke” sites in Jacksonville and Tampa. It will also mark the introduction of two automated local fulfillment centers with Ocado, letting Kroger Delivery serve customers in as fast as 30 minutes from a selection of 10,000 fresh food items and essentials and deliver same-day and next-day orders from an assortment of 35,000 items.

“The acceleration of Kroger Delivery continues with these new facilities and our continued focus on creating career opportunities and serving customers through interconnected, automated and innovative fulfillment models that cater to different and accretive grocery shopper missions in both new and existing geographies,” Gabriel Arreaga, Kroger’s senior vice president and chief supply chain officer, said. “We have a pipeline of sites in development across the U.S., with several scheduled to open next year, and we’re excited to continue delivering the Kroger experience to more doorsteps.”

Facilities in Groveland and in Monroe, Ohio, have already opened. Additional units are on their way in Dallas; Forest Park, Ga. (Atlanta); Frederick, Md.; Phoenix; Pleasant Prairie, Wisc.; Romulus, Mich. (Detroit); and sites in the South, West and Pacific Northwest.