Behind rapid customer adoption of services like click-and-collect and expansion into delivery, the Kroger Co. is on pace to double digital sales to about $5 billion this year. But its chief digital officer, Yael Cosset, worries about going too fast and is careful not to get envious of competitors that might possess more spectacular digital bells and whistles.

“While we may not have the best features or the best experience across the entire portfolio, we have the most relevant experience for our customers,” Cosset said during an address in the opening general session of the Grocery Shop conference on Oct. 28 in Las Vegas. “It’s very dangerous sometimes to get enamored by some of the innovation and capabilities [of our competitors]. It could act as a reminder of what we need to build, but the important point is not to let it become a distraction. I am very pleased where we are in our journey. Our customers like what we are offering.” 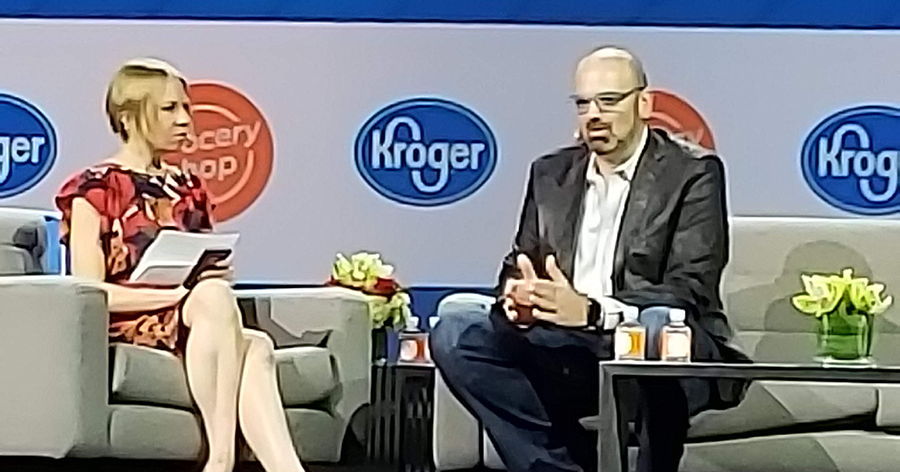 In an interview, Cosset discussed the importance of growing digital sales in context with its underlying strategy and its 60 million customers. As a result, he wrestles with the notion of keeping its digital offering relevant to the retailer’s massive shopper base, striking a balance between introducing fulfillment innovations that might get ahead of where its shoppers are vs. the dangers of falling behind.

“I would say the time is the constant dilemma: Should we go faster on a specific initiative or innovation, or should we let the customer get ahead of us sometimes?” he said. “If you get too fast or too far ahead of the customer, while it may create headlines, you are going to create a lot of tension and friction in your business model. If you get too far behind, you lose the possibility to remain relevant. And so it's that constant tension of should we accelerate or slow down with regard to the customer and where we are related to their transformation.

“Technology has opened many doors and has been a huge source of improvement in our lives but not everybody is adopting it at the same pace, so we need to be cognizant of the fact that we have over 60 million families that we need to satisfy with our services.”

That said, Kroger has been plenty busy with new offerings, many coming in partnership with outside companies as it adjusts to the digital revolution, Cosset said. Deals announced just this year include a partnership with robotics firms Ocado and Nuro, an acquisition of online meal-kit company Home Chef, and a partnership with the Chinese e-commerce site Alibaba to sell Kroger’s private label groceries in China.

Cosset said these partnerships are helping to accelerate Kroger’s offerings where appropriate, such as the deal with Ocado, which he described as bringing more than advanced robotic equipment to fulfill online orders but, importantly, 18 years of experience in having done it.

He said he believes an underappreciated aspect of Kroger’s advancements in technology has been its ability to adjust to how the engagement with customers has changed along with them. He said he takes pride in noting that the digital offering at Kroger was doing more than shifting sales from the physical channel to the virtual one. Instead, it was growing both at once as digitally engaged shoppers also tend to be heavy store users invested in the brand.

“We hope to be demonstrating to the rest of the industry a path,” he said. “As you improve the relevance of the offering you change the nature of the engagement. For us it is higher frequency. We are getting higher share of mind and that translates to more frequent shopping and so we see digital customers spending more time more frequently in stores.”