Continue to Site >>>
Edit
Photograph courtesy of Save A Lot

Save A Lot’s transition from a retailer to a wholesaler has quietly generated another significant deal, as Colorado-based independent licensee Leevers Supermarkets crossed the country to acquire 17 stores in the Philadelphia market, WGB has learned.

The stores were formerly owned by Save A Lot’s St. Louis-based corporate arm, which since its recapitalization last year, has been looking for existing or new licensees to take over all but a small handful of owned stores in its home market. To date, Save A Lot has executed 12 transactions comprising 132 stores, “with more on the horizon,” a spokeswoman says—but the private company has not announced all of them. Save A Lot has indicated it expects its 300-plus store relicensing program to be complete by the end of the year. That would leave a chain of a little more than 1,000 discount stores, with all but 21 owned by independents. These operators are provided wholesale goods and various field support by Save A Lot, which is retaining a base of stores in St. Louis to serve in part as test labs.

Franktown, Colo.-based Leevers is a family-owned chain operating 17 Save A Lot stores, one Colorado Ranch Market, and a newly opened concept called Leevers Locavore in its home state. Chairman and CEO John Leevers in an interview with WGB this week confirmed his company had recently completed the deal for the Philadelphia-area stores, essentially doubling its size. A press announcement was awaiting details of the transition and forthcoming store renovation program at the units, but Leevers for about a month has been in the process of recruiting employees at the units. The company also took on existing local managers and staff who previously reported to Save A Lot. Further financial details have not been disclosed.

That’s not Save A Lot’s only activity in the region. A separate licensee known as Save Philly Stores has taken another chunk of Save A Lots in the wider region—11 units stretching from Wilmington, Del., to Atlantic City, N.J., to Harrisburg and York, Pa.—but its officials have not responded to WGB’s requests for more detail, and it is not clear whether all of those stores were corporate transfers.

How It Should Be

Leevers said the opportunity to take over in Philadelphia made sense given the company’s ambitions to grow, its confidence in its ability to effectively cater to local shoppers as demonstrated in its home markets, a turnkey transition with proven volumes and customers in a format with which it was already familiar, and stores in a tight geographical radius.

“It was a combination of our interest to grow and diversify, and Save A Lot’s stated intention to become a world-class wholesaler, so it worked out on both sides,” Leevers said.

In Colorado, Leevers has primarily operated Save A Lot stores serving Hispanic populations. The mix in and around Philadelphia—including several in city neighborhoods but also stores in nearby Pennsauken and Ewing Township, N.J.—is more diverse. Leevers said Save A Lot is allowing independent operators more flexibility to buy to meet neighborhoods than it might have a few years ago.

“Our go-to-market strategy as an independent operator is to cater to the needs of the local customer. That’s what independents should do,” Leevers said. On Save A Lot’s move to turn stores over to licensees, Leevers added, “we are very much with them on that. We feel this is how it should be.”

The new operator enters a fragmented city under widespread invasion by discount stores. As previously reported, the West Coast discounter Grocery Outlet has reopened a growth front in the region, and Aldi, Lidl and Wakefern’s PriceRite also operate stores in the metropolitan statistical area. Together, these value-focused brands control only about 5% of the market, according to figures from Metro Market Studies’ 2020 Grocery Distribution Analysis and Guide, although their pricing strength can make an outsized impact on conventional rivals, sources say. Save A Lot’s 1.4% market share would also include units from other licensees, including the Save Philly Stores group.

The largest of Save A Lot’s announced relicensing transactions was Fresh Encounter’s takeover late last year of 51 Save A Lot units in Florida, another move representing a geographical leap for Ohio-based Fresh Encounter. At that time, Save A Lot said it had sold 82 stores in seven deals indicating another 50 units have since moved in five deals, including the Leevers buy. A spokeswoman said the company was partnering closely with licensees to refresh and remodel as many as 250 stores in 2021, updating the look, feel and layout based on an Aldi-esque prototype introduced in St. Louis in 2019.

Save A Lot’s development into a pure wholesaler with a focused hard-discount model—along with a $350 million jolt of new capital and the expected lower costs of operating a wholesale business—has given the company the potential to improve its financial performance after a lengthy and costly turnaround that began under private owner Onex Corp. and has continued following Onex’s departure and the recapitalization. It appears to have also accompanied easing tensions with some licensees, who over the years have expressed concerns that they weren’t adequately supported.

“Through the relicensing transactions we are executing across our footprint, we believe that we will be even better positioned to continue to serve the communities in which we operate,” Save A Lot CEO Kenneth McGrath said while announcing the Fresh Encounter deal in December. “We currently have a dedicated group of retail partners that we support, and we look forward to helping other entrepreneurs own, operate and succeed in their own business.”

Though still accounting for only a fraction of industry sales, discount stores are among the food industry’s fastest growing sector. Save A Lot, however, has been largely out of the picture, having closed hundreds of stores since 2016 as it addressed mountainous debts, outdated stores, products and pricing while counterparts such as Aldi, Lidl, Grocery Outlet and an increasingly food-focused Dollar General have barreled into rapid growth. 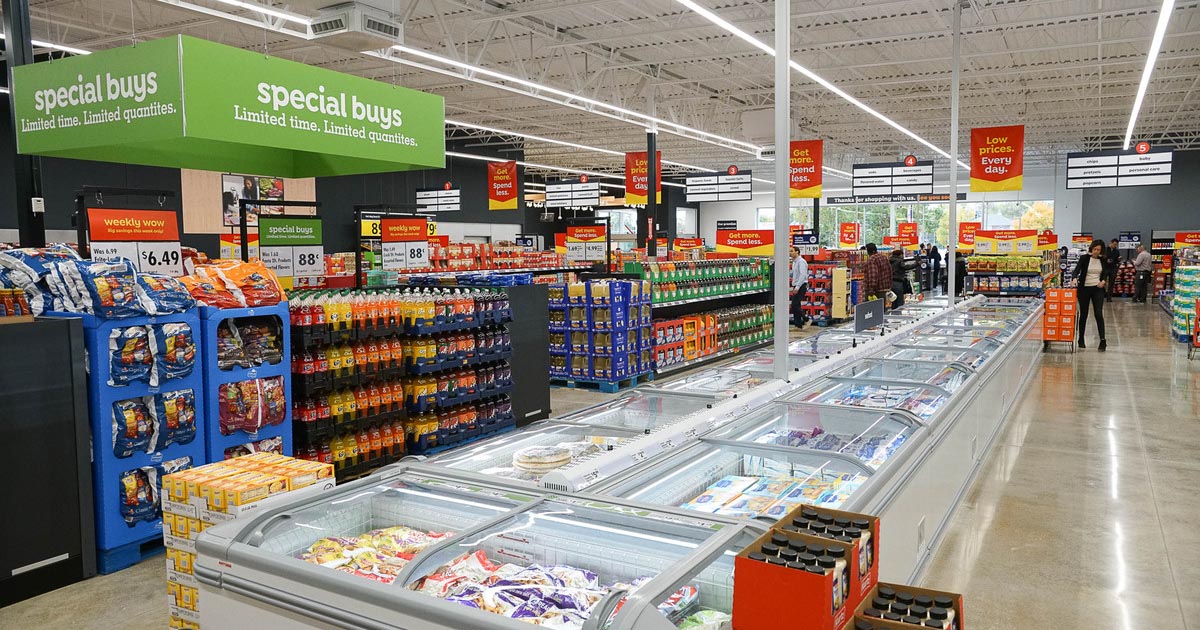 Elements of Save A Lot's new prototype, introduced in St. Louis in 2019, are coming to as many as 250 stores this year. Photograph courtesy of Save A Lot

“After a number of store closures through the years, the remaining cohort of licensed stores are healthier but still have to contend with strong competitors like Walmart, Dollar General and Aldi, which plans to aggressively expand its store base across the U.S. and also new entrants like Lidl that could create additional competitive pressure in the longer term,” Moody’s Investors Service said last month in a release detailing a corporate credit review of Save A Lot. Moody’s noted the transition has “high execution risks” but the potential to lower costs and thereby improve EBITDA.

Save A Lot’s evolved business model would also click between its various discount rivals. It tends to target an income demographic more akin to Dollar General than to Aldi; but like Aldi, it relies on a tight assortment of own-brand items at everyday low prices. Its stores tend to be small (they average 15,000 square feet) and evolved to be more labor-efficient like hard discounters, although many differentiate behind service departments like in-store butchers. Around 65% of Save A Lot’s assortment is private brand, nearly all of which underwent reformulation and repackaging under the turnaround. Save A Lot’s selection of branded goods offered at limited-time special buys and the independent operator model resembles Grocery Outlet.

Save A Lot brings an overarching hard-discount point of view to its new profile; McGrath joined Save A Lot shortly after a stint as Lidl U.S.’s first CEO; Chief Operating Officer Kevin Proctor was also part of Lidl’s initial team—they are both veterans of Lidl’s division in Ireland.