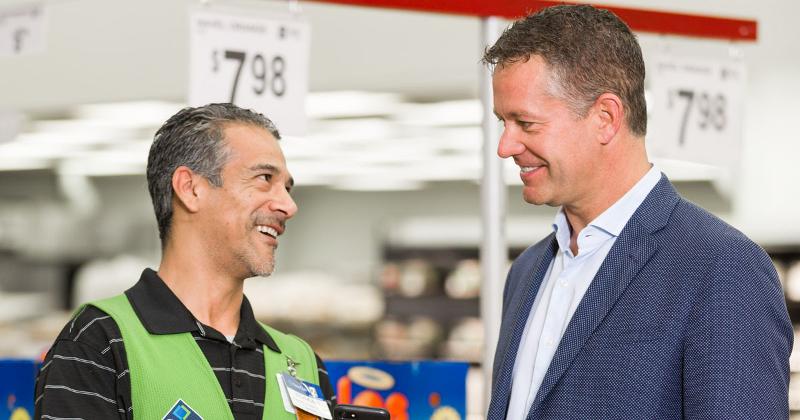 It was five years ago this month that most of us first heard from Greg Foran.

October 2014 came in the midst of a particularly bad stretch by Walmart U.S. standards. Same-store sales in the U.S. had been running flat or negative for more than a year. Stores were dusty, employees were indifferent. Walmart’s strategic creativity had been going mainly toward ways to reduce costs—and toward building a bunch of ever-smaller stores that could be seen as something of an admission that giant Supercenters just couldn’t get the job done anymore. For evidence of that, you only had to look at the competitors taking share from Walmart: dollar stores, discounters and almost any supermarket that could do fresh food well. Even Walmart’s own small stores, such as the Neighborhood Market format, appeared to be taking share from its parent.

Foran, a New Zealand native and a veteran of the Woolworths chain, had joined Walmart in Asia a few years before and was something of a surprise pick by Walmart’s youthful new CEO Doug McMillon to replace Bill Simon as U.S. chief executive.

During a presentation for investors that October—Foran’s first public remarks since taking on his U.S. role—he astonished those of us conditioned to hear a top Walmart executive talk about leverage. Foran, instead, talked about food.

“I think we do a reasonable job with fresh,” he said, leaving no doubt that “reasonability” to Foran was nowhere near where he wanted fresh food to be. “But I do worry about our vegetables—in particular, our green-leaf vegetables. … When I pick up that iceberg lettuce, is it one that I’m going to buy, or am I starting to see brown on the edges because we haven't rotated well enough in store?”

It’s rare enough to hear a top executive capable of diagnosing a chain’s problems by analyzing the quality of its lettuce leaves—and the practices that got them that way—but Foran plowed right on to steaks at Walmart. These weren’t cut precisely enough, he’d noticed, with ends that weren’t as thick as the middles, so if you like steaks medium rare you’d have to settle for medium or well-done edges, and that, in Foran’s estimation, wasn’t reasonable either.

The message that day was that if he noticed these details, customers could too—and that wasn’t a bean counter but a shopkeeper speaking. Given the right time and investment, Foran knew he could fix it. 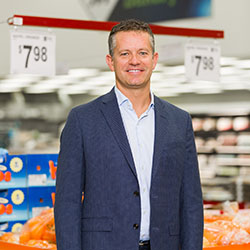 Food having a new advocate at Walmart was among the first signals of a remarkable U.S. turnaround engineered by Foran, who announced his forthcoming departure from the company this week. Though Foran’s other priorities—better paid and trained workers, cleaner stores and better inventory controls—have also contributed, improved grocery, everything from stock rotations to product reformulations, has been the foundation of the big retailer’s turnaround since that day, with same-store sales increasing in every quarter since and food becoming a platform from which Walmart has progressed toward its omnichannel ambitions.

As a result, the company Foran hands to successor John Furner is in much better shape than the one he’d been passed.

Furner is homegrown Walmart with well-rounded skills and more than 25 years of experience from hourly work in a Supercenter to Walmart China’s chief merchant. Furner’s father, Steve, is former regional VP for the company; Furner went to college in Arkansas, and his brother-in-law manages a Walmart Neighborhood Market. He comes to the new role with an impressive turnaround record of his own, helping the company’s Sam’s Club division find a new way behind an obsessive focus on the customer, a willingness to embrace technology in the form of augmented reality and scan and go in-stores and an efficiency-focused Ask Sam app for workers. He also has demonstrated ability to crack the whip—closing 10% of Sam’s stores not long after his arrival.

Analyst Karen Short of Barclays called Furner a “born leader,” whom she expects will “push the boundaries” in partnership with e-commerce counterpart Marc Lore, whose forward-looking but money-losing investments reportedly caused some tensions with the merchant-minded Foran.

McMillon likewise lauded Furner’s combination of pragmatism and vision, indicating Walmart understands that losing the momentum Foran provided just wouldn’t be be reasonable. But that now that the big company is humming again, it is perhaps a good moment to transition from a merchant-fixer to an imaginative leader.

“He has the experience and judgment to know what we should continue doing and what we should change,” McMillon said of Furner. “He embraces technology and new ways of working, and he keeps our customers and Sam’s Club members at the center of everything we do while delivering results for the business.”