A real estate brochure now being distributed by Lidl U.S. indicates the discounter’s willingness to explore a variety of store formats it hadn’t previously, including ground-floor commercial spaces in urban buildings and dark supermarket spaces in shopping centers.

A spokesman for the chain, which is run by Germany’s Schwarz Group with U.S. offices in Arlington, Va., said computer renderings of such sites published in its brochure are only indications of what’s possible for the discounter and that it was not ready to announce any new formats for its stores.

“The brochure is tailored to the U.S. and conveys our openness to different formats and possibilities in our search for convenient locations for new stores,” the spokesman, Will Harwood, said in an email. “The computer renderings are drawings that illustrate that point.” 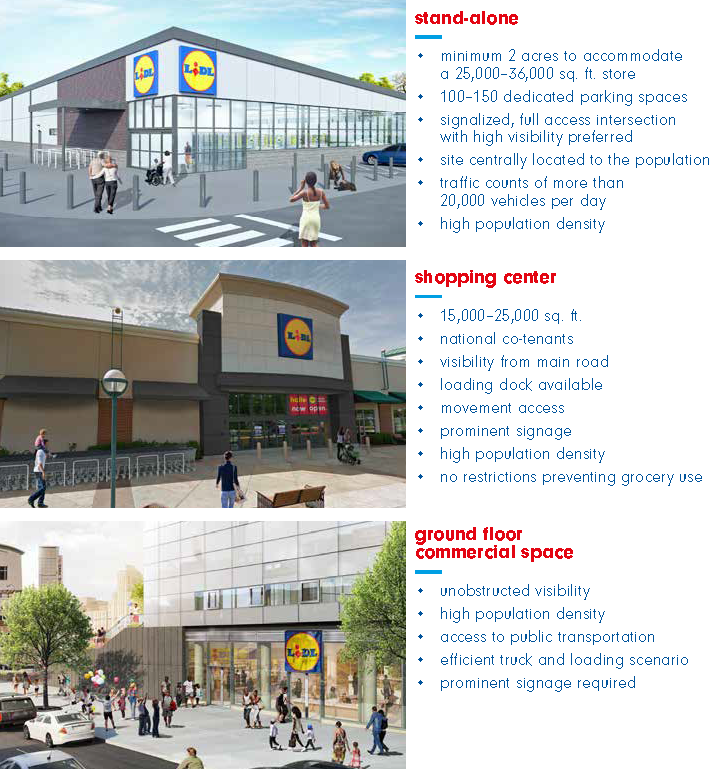 Lidl’s more than 50 stores in the U.S., all of which have opened since June 2017, share a similar 36,000-square-foot prototype and all were new builds. As reported first by WGB late last year, the chain began exploring smaller stores and lease deals amid indications that its initial models were costly, with some experiencing sales volumes that could not support their size. Reports indicated the chain has decided against pursuing dozens of sites, while seeking to modify approved plans for many others.

A site set to open soon at the Staten Island Mall in New York will be Lidl’s first leased site.

Lidl has been deliberate about announcing openings any more than a few weeks before stores are to open. But the activity indicates the chain is indeed pursuing a “a new beginning” in the U.S., where a new CEO Johannes Fieber came in this summer. Fieber is said to have been a selection of Schwarz Group CEO Klaus Gehrig, a reported critic of the costly “glass palaces” its U.S. team had initially built.

The real estate brochure indicates Lidl could more closely align its U.S. stores with its models in Europe, which are considerably smaller and more versatile, fitting into tight urban spaces, unique existing buildings and in greenfield sites. The brochure also indicates more precise site selection criteria, indicating for example, differences in population density requirements between sites in New Jersey and Pennsylvania vs. those in the Carolinas and Georgia where it is also building sites.

Critics of Lidl’s initial U.S. rollout had pointed out the chain had overlooked some of those subtleties of the U.S. market.